Luca Francesconi
Quartett – Opera in one Act to a libretto by the composer, based on the play of the same title by Heinrich Müller (itself freely inspired by Pierre Choderlos de Laclos’s Les liaisons dangereuses) [sung in English, with English surtitles; UK premiere] 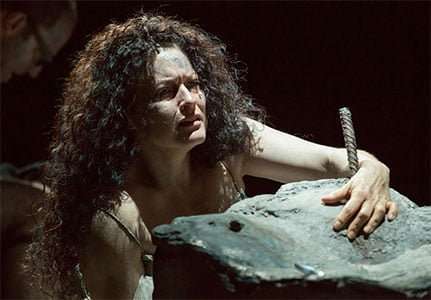 At the end of the Hollywood film of Dangerous Liaisons, there is the memorable scene in which Glenn Close as the Marquise de Merteuil, the victim of her own power-games, removes her make-up to reveal herself as a vacuum. This is the Marquise, now in the hell of her own making, who takes to the stage reunited with her partner-in-depravity Valmont in Luca Francesconi’s opera Quartett. The composer is little known in the UK, ditto the East German playwright Heiner Müller (1929-95), who wrote his play of the same title derived from Laclos’s epistolary novel Les liaisons dangereuses. The heavily politicised, Marxist Muller described his play as a reflection on terrorism, by which I’m guessing he means the deployment of base motives to extreme, negative ends. 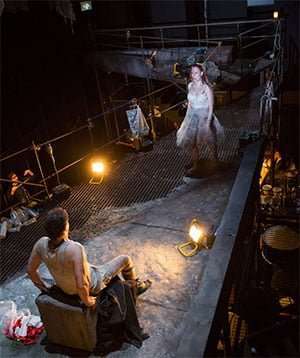 Francesconi’s opera certainly lives up to this and the play’s lurid pessimism, enlarged by John Fulljames’s Beckettian staging and Soutra Gilmour’s wasteland, end-of-time designs, with the stage above the pit and the audience placed in front, as normal, and behind, in the backstage area. The tattered, Miss Havisham-style lengths of lace suspended above the action are used for video projections of what I took to be the wriggling bacteria of decay. The Marquise and Valmont are trapped in a Neverland of life-denying lust, their “slavery of bodies” expressed in the gleefully pornographic libretto.

Although there are only two singers, the Quartett of the title explains itself as the Marquise and Valmont imitate each other and their sexual conquests in an extended (about 80 minutes, played without an interval) conversation of tumultuous, tumescent anxiety (with a very rowdy orgasm about two-thirds of the way through), ghosted by a dense electronic score in addition to the tireless London Sinfonietta.The whole is a death-obsessed whirlpool of existential recrimination and regret, the miseries of Lulu, Bluebeard’s Castle, even The Turn of the Screw inflated to grotesquely expressionist ends. Francesconi’s music offers the occasional life-line of spectral melody, but the overwhelming impression of his score is one of hyper-explicit reaction to the text. Anyone with half an ear cocked to avant-garde music over the past five decades will be familiar with the sort of sonic saturation that makes its undeniable, in this case often bludgeoning, impact without much in the way of a unique imprint.

Kirstin Chavez and Leigh Melrose, dressed in grubby underwear, managed the angular, anguished vocal requirements and the text’s verbosity heroically, and in the moments of exhausted repose they gave glimpses of the consequences of the Marquise’s and Valmont’s squandered humanity with an eloquent, flat-lining close evoking the end of the Glenn Close film. The Royal Opera has commissioned a full-length opera from Francesconi, but you’ll have to hold your breath for another six years.