As part of “Meet the Young Artists Week”, a showcase for members of the Royal Opera’s Jette Parker scheme, the Linbury Theatre played host to a double-bill of playful mid-twentieth-century works. 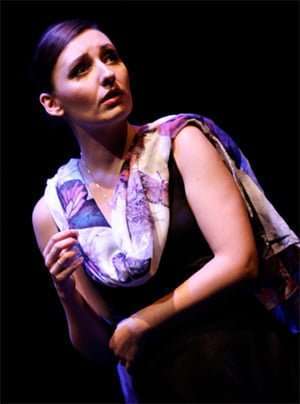 Luciano Berio’s Folk Songs (1964) was written as the final tribute to a woman he no longer loved. Commissioned for Mills College in California, the collection of eleven songs received its premiere with the composer conducting the chamber orchestra, and his wife, soprano Cathy Berberian, as soloist. Their marriage ended not long afterwards. Folk Songs is a strange set. In the hands of a born performer such as Dušica Bijelić, they are a gift. Berio seemed to have a liberal idea of what counted as a folksong. The first two, ‘Black is the colour (of my true love’s hair)’ and ‘I wander as I wander’, were written in the 1930s by an American. The sixth and seventh songs, ‘La donna ideale’ and ‘Ballo’, Berio wrote himself from scratch, not that this is at all obvious when heard in context. Every tune, from Sardinian motet to Armenia love-song, is clothed in idiomatic Berio sounds, and is thoroughly twentieth-century. Bijelić varied her vocal quality considerably as she adopted the different roles. Carefully meek and lost at the start, she later thrust her belly forward and bemoaned the woes of love, adopting a rich chesty alto tone.

The scoring – for viola, cello, harp, flute (doubling piccolo), clarinet and two percussionists – is employed in various combinations to make different folk bands. Open viola double-stopping echoes a lonely hurdy-gurdy. Piccolo and harp are given pretty twirls. Viola harmonics and low flute give ‘I wander as I wander’ an unusual, haunting stillness. The songs slip from English to Italian to Armenian, and Berio exploits the timbres of these many tongues. Bijelić sang merrily and also incredibly quickly; at other times she cooed, her light voice fluttering like a bird. The last number, ‘Qulaliyam’, Berberian transcribed from a 78rpm record, presumably inaccurately: it is considered untranslatable. This has an extremely unsettling effect on the audience, one which Berio probably intended. Bijelić continued to perform with characteristic vivaciousness, winking and swaying her hips. The audience, denied surtitles for the first time, now had a wall dividing them from the soloist. The very act of performing – charming us with gestures, sharing laughs and sadness – suddenly seemed false and even embarrassing. Berio, dead these last ten years, could not resist shattering the illusion that he was taking the plight of his soprano heroine seriously. 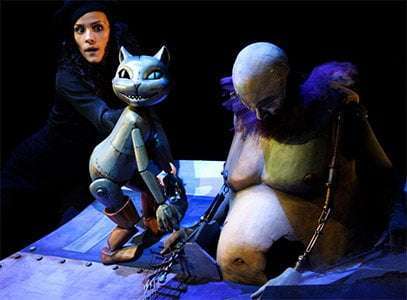 El gato con botas, known in English as Puss-in-Boots, tells the story of a clever cat that contrives to provide its new owner with a fancy set of clothes, a palace, and eventually a royal wife, thus securing its own comfort at the foot of the throne. This operatic setting, first staged in 1948, is by Xavier Montsalvatge (1912-2002), a Catalan composer whose successes as a musician under Franco have hindered his recognition elsewhere. Variously inspired by the Catalan sounds of his childhood, the rampant Wagnerism that swept over Europe, and the polytonality of Messiaen, Montsalvatge adopted a colourful world of pastiche. Even in Albert Guinovart’s chamber version, there is still enough range in the reduction for the opera to be pacy and fun, with jazzy piano solos, large bursts of Puccini-esque romantic outpouring, and a fair amount of comedy. A woodblock tapped away as on a mouse ran in between Puss’s boots. Bells in scales and modal patterns made it clear that this opera is a fairytale.

Puss himself is played by the honey-voiced mezzo Rachel Kelly, and also by a small mangy, grey puppet. Three figures in black danced the puppet-Puss about the stage, leaping over rows of puppet ladies-in-waiting. Kelly, meanwhile, pouted her way from the gutters to the palace, with a convincingly feline, mischievous strut. Pedro Ribeiro’s direction is fantastically imaginative, and indeed it had to be. There is not enough plotting in the opera to sustain its hour and ten minutes, and what plot there is confuses. An ogre appeared two-thirds of the way through, trapped in a hole. It was an entertaining but mystifying addition to the cast. “My nose is like a big aubergine filled with red wine”, he boasted, part of a general silliness appropriate for a tale that began life as a seventeenth-century political satire.

This is the sort of show that adults should not enjoy, but do. There were laugh-out-loud moments. There were also intakes of breath at transforming sets and unexpected costumes, and Luis Gomes used his bright Italianate tenor voice to pleasing effect. The Southbank Sinfonia was not as convincing as it had been in Folk Songs. As an opera, El gato con botas may not be a masterpiece but it is certainly very entertaining.