Berg
Lulu – Opera in a prologue and three acts to a libretto by the composer after the plays Erdgeist and Die Büsche der Pandora by Frank Wedekind [performed with Act III realised by Friedrich Cerha; sung in German with English surtitles] 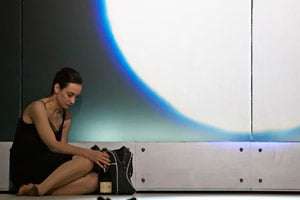 The scheduling of this production is timely, as it is just over three decades since “Lulu” first made its appearance as a completed entity – the third act having been realised by Friedrich Cerha well before that and kept under wraps until the passing of Berg’s widow. The Royal Opera debut came in 1981 and was revived two years later; since when, the viability of that final act has been called into question from some quarters. Not the least significant requirement of this new production, therefore, was that it re-affirm the necessity of performing and so experiencing the opera as a three-act totality.

Its most striking aspect is Christof Loy’s almost minimalist approach to the staging. No doubt on the basis that an opera so involved in its character relationships and complex in its musical treatment of these needed to eschew comparable visual activity, the set consists of little more than parallel white screens towards the back of a white floor, with many arrivals and departures simply replaced by figures remaining stationary at the side or rear of the stage. Gracing Herbert Murauer’s designs are a smattering of props: a chair that fulfils all manner of functions, an axe that rarely left the floor, trails of bank notes or share bonds periodically dropped to reinforce the decadent context, items of clothing ostensibly doing likewise and smears of blood that enlivened an antiseptic backdrop. Eva-Mareike Uhlig’s costumes are neutrally modern in that what held good for the inter-war update of turn-of-the-century dramas are appropriate for its presentation today. 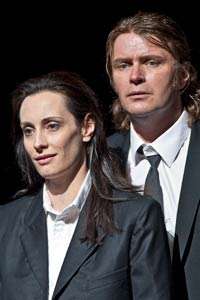 All of which might have been vindicated had the production evinced greater dynamism of imagery and movement. Yet Reinhard Traub’s lighting too often fails to generate a visual intensity comparable to the musical momentum; rarely was there a degree of light and shade to match the emotional range of Berg’s music. The partial exception to this is a circular spotlight against which were silhouetted figures whenever Lulu’s portrait became the centre of attention: a viable ruse for the absence of an object which assumes iconic status (and in the true sense of that much-abused term) as the opera progresses, but which verged on becoming a cliché in its own right. Otherwise, the essentially neutral quality of what was seen rarely obstructed but equally failed to illuminate what was heard.

Allied to this was Thomas Wilhelm’s movement direction – angular and precise yet largely predictable in its exchanges and routines, as if seeking an equivalent for the symmetries played out in the drama and embodied in the music. On which point, the attempt to equate Lulu’s husbands with her clients in the final act was taken far too literally; resulting in a deliberate misreading of the stage action in the final scene – with the outcome that the music’s cumulative intensity was diffused just when it needs to be brought to its climax. The disengaged impression left at the close is not what should be felt.

Although such miscalculations were not apparent in the casting, this was not free of inconsistency. Making her debut in the title-role, Agneta Eichenholz possessed an undeniable poise and allure for all that her coloratura seemed a little effortful and her phrasing uncertain (‘Lulu’s Lied’ a case in point). Neither did her presence or her singing always dominate when it needed to, the portrayal being less that of a femme fatale than a modish courtesan who hardly equates to the ‘earth-spirit’ as envisaged by either Wedekind or Berg. Inherently more sympathetic, Countess Geschwitz became the more involving through Jennifer Larmore’s assumption – yielding and vulnerable, yet with an inner resolve and sense of self-sacrifice that intensified over the opera in a way that Eichenholz’s Lulu never quite managed. If this had seemed an unlikely role for the American singer, it is one she brought off with conviction. 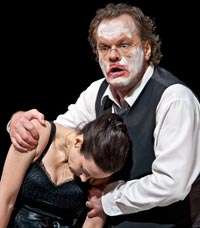 Of the male roles, Michael Volle made for an appropriately bovine and charm-less Dr Schön – a little too hectoring over the first scene of Act Two, when he sees his last vestiges of bourgeois respectability disintegrating around him, though these vocal qualities were well suited to his reappearance as Jack. As Alwa, Klaus Florian Vogt had the requisite indolence and naïveté, but the more fervent passages placed not a little strain on his upper register – though that in the ‘Hymn’ which closes Act Two was hardly helped by over-driven and inflexible conducting. Will Hartmann had the right guilelessness as the Painter but was distinctly under-characterised as the Negro, while Jeremy White was capable in his various cameos. Peter Rose was a properly boorish Athlete if not commanding enough for the Animal Trainer in the Prologue, but Gwynne Howell was intriguing casting as Schigolch – playing down the tramp aspect in favour of a suave and hardly unsophisticated father-figure who easily held the stage. As did Philip Langridge in his triumvirate of roles, notably a Marquis whose refined veneer only emphasised his underlying callousness. Seldom can this role have been more persuasively rendered.

The Royal Opera House Orchestra acquitted itself with assurance in a score whose translucent aura conceals any amount of subtleties, the woodwind and brass being especially well attuned to Berg’s inferences of jazz and blues. Antonio Pappano brought an incisiveness to music that can all too easily lose focus between scenes and across acts, yet a frequent unwillingness to allow its sensuous side to breathe did lead to a loss of expressive fervour in the closing scenes of the latter two acts. The orchestral interludes between each scene were for the most part well handled, though the ‘variations’ linking those in Act Three seemed oddly mannered; neither a transition away from the mood of the first scene nor one into the mood of the second. Moreover, Pappano’s handling of the first scene in Act Three marginally failed to bring its interplay of heightened dialogues and intricate ensembles into productive accord – vital in a scene which contains some of Berg’s most combative music, and whose hard-edged ruthlessness is essential if what follows is to unleash the extent of its tragic inevitability. Surprising in that, having (rightly) gone the whole course, neither of these scenes quite hit the mark.

Of course, many of these flaws may well come right as the run of performances continues. If so, this could yet shape up to be the production of “Lulu” that reinforces its status among the seminal operas of the last century. If not, it will likely go down as one that fell short of delivering what it promised.