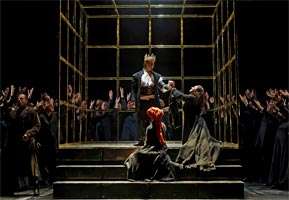 Back for its second revival (directed by Harry Fehr), Phyllida Lloyd’s original production of Verdi’s first Shakespeare opera runs hard to keep up with the surging momentum of the composer’s and Piave’s brilliant concision of the play, which becomes one damn, dark thing after another. Sometimes it works – the ghostly parade of Banquo’s line of kings, the chorus of the dispossessed at the opening of the last act, the shaft of harsh light for Macbeth’s “Is this a dagger?”; sometimes it struggles too hard to make a point – the vision of the contented, loving Macbeths romping connubially on a double-bed with a heap of kiddies they’ll never produce, Duncan’s miniaturised procession with Chinese lanterns to the castle and his murder; sometimes the symbolism is too plonkingly obvious – the gilded cage containing the crown and in which Macbeth meets his end, the double-bed split in two. There is no differentiation between the groups of witches, with some rather perfunctory movement that undermines the impact of the witch scenes and some hammy, cackling-type singing that adds nothing in terms of horror. On the other hand, the unscripted presence of these red-turbaned hags ensuring the fulfilment of their prophecies, as in the escape of Fleance after Banquo’s murder, works well. 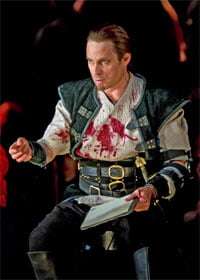 For an opera that really belongs to Lady Macbeth, Liudmyla Monastyrska does not disappoint. As her recent Aida for The Royal Opera proved, her lyric-dramatic soprano is a huge and powerful instrument, with reservoirs of volume, fullness of tone and breath to spare. There’s a security and passion to her singing that carries all before it in this most demanding of roles, and she was completely up for the flashes of ugliness of timbre Verdi calls for. Her coloratura in the banquet scene was memorable, and her sleepwalking scene – beautifully accompanied by Pappano who drew an astonishing range of sound both from her and the orchestra – realised everything that Verdi could have hoped for. Her acting, possibly a bit semaphoric, was of a piece with this essentially traditional staging, and the quality of her singing drew attention away from her approximate Italian.

Acting was not a problem with Simon Keenlyside’s Macbeth, as lithe, testosterone-fuelled and natural as his fans would expect, but I missed the shades of darkness in the voice the role needs to create its powerful denial of human frailty. Also – something I’d not experienced with this seemingly inexhaustible singer before – there were signs of strain by the time he reached his closing ‘Pieta, rispetto, amore’. But despite the effectiveness of his dagger scene, the production cannot help but project Lady Macbeth much more strongly, a factor that turns Raymond Aceto’s otherwise vividly sung Banquo and the Macduff and Malcolm of Dimitri Pittas and Steven Ebel into ciphers.

Any hell-bent urgency lacking in the production is more than compensated by Antonio Pappano’s conducting, which really has the measure of the score in terms of fury, passion, that nagging undertow of melancholy even in the most inappropriately jolly passages, and the sheer drama and colour of the work. The quality of his direction and the raw energy of the playing was quite something.