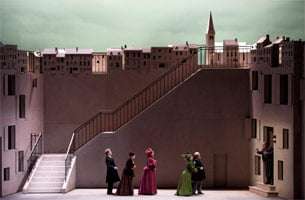 Jules Massenet’s “Manon” can be a tricky opera to pull off, for although it is described as an “opera comique” its mix of romantic and serious drama with a certain Gallic lightness of touch and frivolity does not always satisfy today’s audiences. Laurent Pelly’s new co-production, with the Met, La Scala and the Théâtre du Capitole, Toulouse, satisfies on most levels and manages to fuse most of the elements very well, even throughout a long evening.

Pelly is helped by a very strong and well-balanced cast and with a finely paced and theatrical account of the score under Antonio Pappano. Pappano has a real feel for French opera of this period (“Manon” was first staged in 1884), and the Royal Opera looks to be developing and refreshing its key French repertoire under Pappano’s stewardship. His conducting of “Manon” is notable for his bringing out the colour and sweetness of Massenet’s scoring without schmaltz and counterbalancing that with dramatic urgency when needed. Often the characters express their strong individual emotions in the middle of arias in a dramatic or 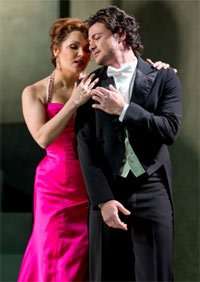 reflective way, and then the music settles back to a more narrative use of the orchestra. Pappano understands this and catches the mood perfectly. The ROH Orchestra was in very fine fettle, brightly coloured, lively, sensitive, and with some gorgeous string playing, and the control of dynamics was impressive.

Pelly’s production using the atmospheric and spacious sets of Chantal Thomas matches Pappano’s lead. The period has been updated to the turn of the last century so that the aristocratic men are frock-coated, top-hatted, whiskered or moustached, and the ladies elegant in long late-Victorian / Edwardian dresses and hats. For the most part this works well – but the one place where it fails is in the Cours la Reine scene where for a moment it felt as if Manon and her gentlemen admirers had strayed in from a production of Lehár’s “The Merry Widow”. That being said the emphasis of the fragility of the existence of courtesans was deftly emphasised. The Hôtel de Transylvanie gaming-hall setting was suitably claustrophobic and seedy and it was here the dramatic temperature really rose – leading to an excellent and bleak final scene. Pelly also managed to capture the pathos of Manon and Chevalier des Grieux’s brief period of (mostly) happy coexistence as well.

Anna Netrebko’s Manon was eagerly anticipated and expectations were met. She has all the vocal attributes for this tricky part – the ability to lighten her tone and sound girlish, the technical prowess needed for Cours la Reine, and then the ability to meet the heavier dramatic requirements of the final acts. She also looks marvellous with her strong stage presence and physical allure. At her first appearance she perhaps overdid the volume slightly and perhaps made Manon a little too self-aware of her power over men and almost unsympathetic. However, she sang ‘Adieu, notre petit table’ with real poise and from thence charted the character’s development most assuredly. Her French was good; her dialogue also. This was a fine performance and one of the best portrayals she has yet given in this house. 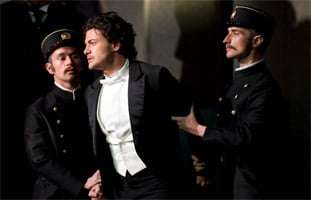 As des Grieux Vittorio Grigolo made an impressive ROH debut, if perhaps also overloud to start with, but he soon settled and gave a thrilling and, where needed, ringing account of the part. His tone is fluid and open, Italianate of quality certainly, and very appealing – and he avoided the trap of being a stock ‘young operatic tenor hero’ in his acting. The idealistic impetuosity and naivety were there vocally as well as physically, as was des Grieux’s gradual awareness of the character of Manon but also his overwhelming adoration. The audience responded very enthusiastically to his sensitive portrayal and rightly so.

In the smaller roles there was also much to enjoy – and these other parts offer some good opportunities. Russell Braun was a suave-voiced Lescaut, subtly depicting the weakness of the character and his self-centred ambivalence to the plight of his cousin. Guillor de Morfontaine was well sung and amusingly played by Christophe Mortagne – all the vanity, spite and humour well judged. William Shimell, though somewhat wiry of voice, gave de Brétigny his due prominence – the moment where he realises Manon has no further use of him or his money was tellingly enacted. Christof Fischesser was not such an imposing vocal presence as Comte des Grieux – a more rounded bass sound is needed – but he told you all you needed to know about the older man and his own potential weaknesses. The trio of ladies were a mellifluous ensemble and made the most of their comic interjections.

Antonio Pappano looks set to create a strong tradition of French opera for Royal Opera, one it can be proud of on this showing – and we have the enticing prospect of a new production of Massenet’s “Cendrillon” next season as well as a revival of Gounod’s “Roméo et Juliette”.