The Orchestra of the Royal Opera House
Carlo Rizzi 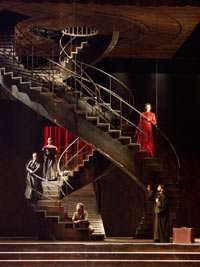 In 1854, two performances of Rossini’s 1821 “Matilde di Shabran” were given at London’s Royal Opera House. On 23 October 2008 came the third, in a production by Mario Martone that allowed events to unfold naturally and without distorted updating and alterations to the story. Corradino’s castle was simply designed: just two spiral staircases intertwining and amusingly employed when the Contessa d’Arco and Matilde meet, Neither stonework of castellation could be seen, but what the audience saw was sufficient.

The work is termed a melodramma giocoso: more giocoso and at times almost verging on farce in this production. It is virtually an opera semiseria. Ensembles are to the fore; even Corradino does not sing an aria. He is a misogynist. Nevertheless, he is the object of attention for both Matilde and the Contessa. His enemy is Raimondo, a minor role, whose son Edoardo, sung by a mezzo-soprano, is incarcerated in Corradino’s castle. When Corradino’s anti-woman stance begins to waver as a result of Matilde’s guile, he views Edoardo as his rival. With the assistance of his doctor Aliprando and of Ginardo, plus the of the unhelpful foppish poet Isidoro on hand, Corradino eventually capitulates to Matilde. 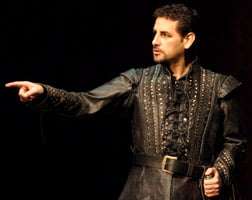 Carlo Rizzi, making a welcome return to Covent Garden, led a performance from the orchestra that fizzed along. Much fine singing came from the soloists, three of whom, Juan Diego Flórez, Carlo Lepore and Marco Vinco, had appeared in the Pesaro presentation in 2004, which is available on Decca CDs.

As one would expect, Rossini, provided some splendid ensembles, such as the sextet in Act Two. (The second act runs for about 65 minutes, whereas Act One lasts nearly two hours.) Two fine duets are that in the first act in which Matilde and the Contessa exchange insults and the one in Act Two for Edoardo and Corradino. On a lower level us Isidoro’s buffo aria at the start of Act Two: all rapidity and little melody; standard fare and musically trite. In contrast, the act and the opera end with a florid aria for Matilde that should be better known. 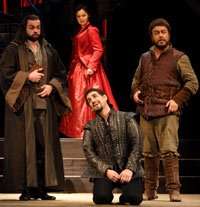 If the orchestra fizzed under Rizzi’s direction, the singers sparkled. This is Aleksandra Kurzak’s finest achievement at Covent Garden. She possesses the necessary technique for Rossini’s roulades and produced fresh tone from top to bottom. One would not have thought that at the dress rehearsal three days earlier an indisposition had reduced her to miming her role while Elena Xanthoudakis sang it from the side (and sang it very well, according to three informants). Kurzak reinforced one’s knowledge of here being able to play comedy. Of course, Flórez’s ability as a bel canto whose skill is fioriture is second to non was proved years ago. All the fiendishly difficult divisions were accurately dispensed, as one knew they would be. As Corradino’s severity and hatred diminished, Flórez was required to engage in some energetic antics, including hanging upside down from the railing of the staircase. In was in such matters that the production bordered on farce, but these were minor points set against Flórez’s stunning vocal performance.

As Matilde’s rival, Enkelejda Shkosa played with a haughty maliciousness and sang in a warm, well-focussed mezzo on a smooth tonal emission, which sat well against Kurzak’s brighter sound in their duet. The other mezzo, Vesselina Kasarova, had in Edoardo a role with greater ranger across the stave and more ornate music. Her Act One aria ‘Piange il mio ciglio’ contains some wide leaps in the vocal line and tests the depths if the singer’s voice. Kasarova (stressed on the second syllable) sailed through, with some dextrous turns of her voice, descending in ‘normal’ tone rather than employing chest-notes.

The three lower-voiced men were vocally contrasted, with Carlo Lepore’s firm tone being the darkest. He and Marco Vinco provided strong performances, winningly sung. Vinco’s opening aria would have had more impact had he been down on the stage rather than halfway up a staircase. The poet Isidoro was evidently regarded as the third most important character, for Antoniozzi took his bow after Kasarova and before Flórez, with Kurzak as the eponymous Matilde obviously appearing last. Like the villagers in the opening scene, Antoniozzi entered the opera from the auditorium, communing with the audience before ascending to the stage. He studied with that splendid artist Sesto Bruscantini, so one is not surprised that his comedic strengths, in what is a definitely comic role, were well displayed as the poet. His is not the strongest voice in the cast, but he gave an amusing interpretation. All three of these basses were making a Royal opera debut.

Where one places “Matilde” in the pantheon of Rossini’s comedies, or in his complete operatic output, is a personal decision, but certainly all who love the work of this composer should try to see it. Now may we have some of Rossini’s opere serie, neglected at Covent Garden for years?