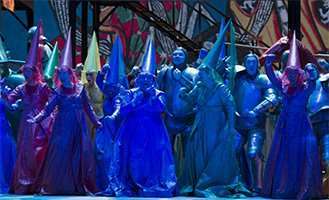 This central Act proved to be the high point of a production that too often fails to trust its material, perhaps with good reason but not always with desirable results. Any director faced with exhuming an operatic corpse must first reflect upon why it fell out of the repertoire in the first place and then, having identified the reasons, find a way to make it palatable for today’s audience. Robert le diable turns out to be a five-act leviathan whose music holds so little psychological ambition that one begins to see beyond Wagner’s anti-Semitic outbursts and understand his intellectual scorn for its composer. The subject matter may be red meat but its compositional execution is rendered anaemic by the rhythmic patter of Meyerbeer’s score, while the final Act consists of little more than our hero pondering whether to choose Heaven or Hell. 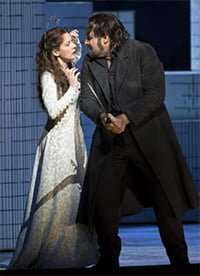 Unfortunately for the composer, Pelly is a director whose comic instincts often get the better of him. He is perceptive enough to recognise the opera’s inherent problems, but when they arise he responds cheaply with a knowing nudge and wink. Why else during his interminable fifth-Act vacillations would Robert (Bryan Hymel) direct the line “Que faut-il faire?” (What should I do?) straight to the stalls, if not to induce the ‘panto’ titter he duly won from the first-night audience?

The fustian, near-Faustian plot is the quintessence of nineteenth-century Gothic. Robert, Duke of Normandy, wishes to marry the virtuous Isabelle (Patrizia Ciofi, a late replacement for Jennifer Rowley in a crucial but largely static role). Alas, he has fallen under the influence of the satanic Bertram (John Relyea) and only through the saintly persuasion of his foster sister Alice (Marina Poplavskaya) can he hope for redemption. This slender dramatic thread unfolds across a wide musical expanse that includes several beguiling episodes (including a remarkable extended a cappella trio in Act Three for Robert, Bertram and Alice) but rather too many passages of agreeable note-spinning. 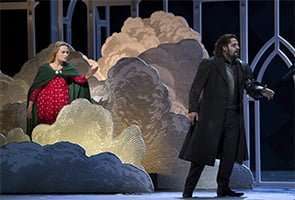 Chantal Thomas provides some spectacular designs that inevitably chime in with her regular collaborator Pelly’s inconsistent direction. Thus, while her pen-and-ink mountainside setting accommodates a brilliant Breughel-inspired vision of damnation in Claudio Cavallari’s video projections, her climactic representation of the Jaws of Hell and Clouds of Heaven come straight from the pages of a penny-dreadful. Pelly’s costumes tend to the lurid, like a Hammer movie in Eastman Color, so his chorus of ladies-in-waiting materialise like a variegated Ku Klux Klan in Isabelle’s miniaturised château-fort. The Orchestra produced a plush aural tapestry under Daniel Oren’s expressive guidance while the Royal Opera Chorus sang and disported its collective self gamely, its members throwing themselves into whatever demands Pelly made of them – from the Pythonesque clutch of armoured knights in Act One to the devoted company of monks (a tad under-rehearsed) in Act Five.

Despite the extraordinary amount of withdrawals and replacements there have been since the initial announcement of a company headed by Diana Damrau and Juan Diego Flórez, it is for the most part strongly cast. Only Poplavskaya disappointed, her cold stage presence unsuited to the saintly Alice and her voice insecure under pressure. By contrast, Ciofi – who, despite being parachuted in to the production recently, has sung the role of Isabelle elsewhere and revisited it recently in a concert version conducted by Oren – seemed wholly at home, negotiating Isabelle’s near-bel canto lines with her customary musicality and acting without a trace of insecurity. Some fine singing was to be heard in minor roles too – the Raimbaut of Jean-François Borras and David Butt Philip’s Master of Ceremonies both resonated with leading-man authority – but nothing could detract from Relyea’s finely-sung, Dapertutto-inflected Bertram, nor from Bryan Hymel’s heroic assumption of the title role, complete with a few scary high notes that involved some notably agile leaps for a Heldentenor.

What a seminal work Robert le diable turns out to have been, and how astute it is of The Royal Opera to revive it after such a long interval. Not only were Gounod’s Faust and Offenbach’s Les Contes d’Hoffmann branches from its stem, its spores must surely have found their airborne way to the Mediterranean home of early Verdi (where Meyerbeer was a known quantity, having begun his operatic career with seven Italian operas before relocating to Paris). For the first four Acts, at least, the music pleases the ear and entertains the spirit even if it fails to probe very deeply. As for the ballet, it is staged with creepy brilliance and diabolically well choreographed by Lionel Hoche. The late Ken Russell would probably have been more explicit with the undead nuns’ shenanigans, but no matter. We got the message. Don’t miss Robert le diable; it may be another 122 years until it comes this way again.