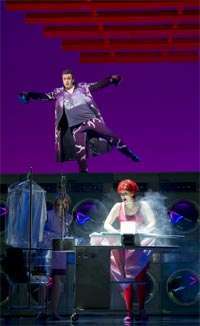 On the face of it, Miss Fortune is exactly the kind of opera that should appeal to new audiences and aficionados alike: a refreshingly simple, universal tale of riches to rags to riches again, and with a score by one of the most respected and accessible composers. Yet these promising ingredients fail to add up to a satisfying whole.

First performed at last year’s Bregenz Festival, which co-commissioned and produced it with The Royal Opera, Judith Weir’s Miss Fortune is now receiving its UK premiere. The straightforward story, based on a Sicilian folktale possibly even older than the punning title Weir adopts, chronicles the sudden plummet from wealth to poverty of the titular heroine – Tina, unmarried daughter of Lord and Lady Fortune – her miserable battle with cruel Fate, and her eventual and equally sudden return to happiness with an improbable Lottery win. 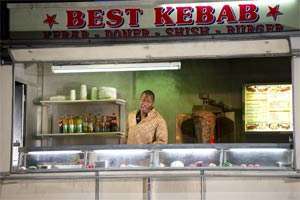 Tom Pye’s striking designs are dominated by vast rotating neon strips and a huge metal hulk, onto which are projected constantly coalescing patterns and images. Scenes including a kebab van and a bank of washing machines make a bold visual impact. Chen Shi-Zheng’s direction is clear and concise. The use of a troupe of 1990s-style breakdancers as the chaotic henchmen of Fate is particularly effective (if not exactly cutting-edge).

Dramatically, things get off to a slow start – not helped by the dreary, dirge-like music of the opening scenes. The final setting of Act One, set in a Laundromat, is much more compelling; the music has a mounting tension as the protagonists determine to confront Fate head-on. Act Two continues in this more enlivened vein, yet, with a few exceptions, such as radiant-voiced Jacques Imbrailo’s outstandingly sunny aria, the score remains mired in a gravelly haze. Even the most positive, uplifting moments, such as the joyous dénouement, remain frustratingly earthbound in feel. Struggling with parts that sit too low in the voice, chorus-ensemble and text-projection is poor, and Paul Daniel finds it an effort to bring the score to life. There is little vocal beauty to enjoy, but the principal cast, headed by a forthright Emma Bell, display impressive strength and commitment.

At only two hours, including a 30-minute interval, Miss Fortune is hardly long by operatic standards – yet the benefit of its uncomplicated story-telling and economical material is negated by its being stretched too thinly. Similarly, the characters’ lack of depth means that it is impossible to empathise. I found myself reacting to Tina’s turn of luck with a nonplussed shrug of the shoulders.

An ultimately disappointing experience, it’s a shame that Miss Fortune does not deliver on the broad appeal that it promises.