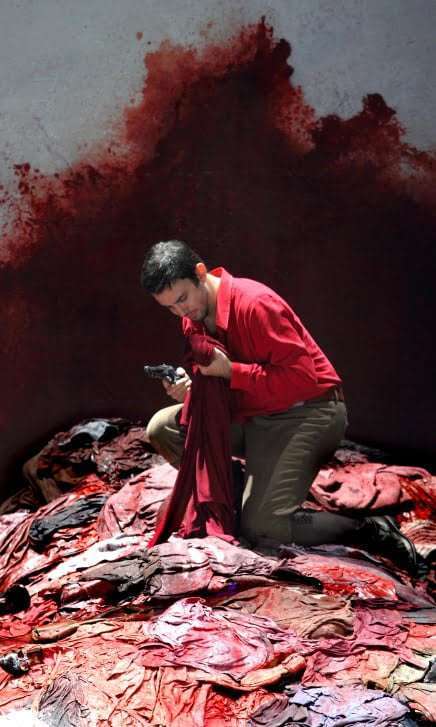 With Idomeneo (1780-1) Mozart came to operatic maturity, demonstrating mastery of formal opera seria models combined with the dramatic fluidity he had inherited from Gluck’s reforms in music drama.

It is an achievement of sorts, then, that Martin Kušej’s new production for Covent Garden is almost completely lacking in dramatic presence or revelation. Clichés abound – a revolving stage, creating so many configurations of blank white walls with hollow openings for doorways; rainfall at the front of the stage several times (just in case we were not impressed initially); liquid nitrogen; Electra’s attempted seduction of Idamante in Act Two looked as though it would become a striptease, though she merely ended up lying on top of him; and the guards holding the Trojans captive dressed entirely in black and brandishing guns (not even threateningly).

The only insight purportedly on offer is to turn the tyrannical hold of the unseen Neptune over the population seem like an abstract ideology or religion – like the menace of any ideology which promotes war or strife, as well as unquestioning obedience, and in one number the chorus is forced on to its knees and equipped with sheets of paper to sing praises to him. But even supposing that this was an idea we were meant to entertain, it was cheapened by the bringing on of a life-size toy shark in place of the sea serpent acting as the god’s messenger. Nor does it help that the audience’s intelligence is patronised with the provision of captions among the surtitles – as though we were incapable of following the narrative or of digesting the synopsis beforehand.

Adding choreographic insult to dramaturgical injury, this production is rather static – often literally so. Electra’s vision of the Furies is manifested by a group of young children dressed in white gymnastic attire and standing absolutely still. During the performance of the additional ballet which Mozart provided (here performed at the opera’s close) there was one more slow, anti-climactic revolution of the stage, with the cast arranged around it completely lifeless, while the audience looked on – voyeuristically it felt. Often during the arias too, the characters are given nothing better to do than pace around aimlessly and ineffectually. 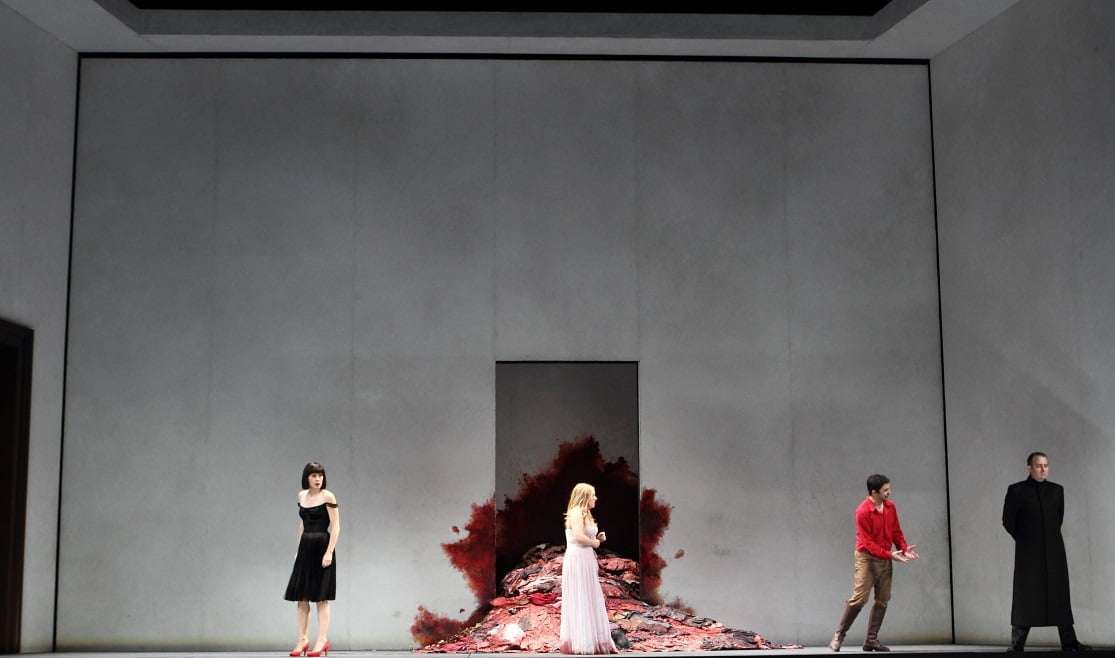 Projected onto the curtain before the non-spectacle of the final ballet was the observation, “Utopias fade. Rebellions decay. The rulers remain. The souls of the people grow cold. Rigid. In the sign of Pisces.” If this were an attempt to make ironic the apparently triumphant import of Mozart’s original, it was an unnecessary imposition upon the drama as the alleged happy ending is obviously qualified by the preceding narrative. The condition of Idamante and Ilia’s elevation is the downfall of Idomeneo (the decline of the old order). And anybody who knows their mythology will already have derived an uneasy sense of history repeating itself, as Idomeneo is ostensibly called upon to sacrifice his own offspring at the end of the Trojan War, just as Electra’s father Agamemnon was required to do in respect of Iphigenia at its outset.

Given all these miscalculations, fortunately we can turn to the musical performances, which are highly competent. Most consistently satisfying was Sophie Bevan’s sweet-toned Ilia. Idamante was sung by countertenor Franco Fagioli, whose voice could really be distinguished as that of a male soprano, his singing possessing a bright incisive tone in very high registers, his technique is certainly impressive.

In contrast to Ilia, the Electra of Malin Byström’s singing and acting had the darker quality of a scheming, jealous woman. Byström’s indisputable musical demeanour was perhaps reminiscent of Edita Gruberová in terms of vocal agility and almost fruity tone. Matthew Polenzani as Idomeneo was not quite so secure, and it rather seemed that at the climaxes of phrases he declaimed a bit more in order to cover over any weaknesses. Still, the sense of Idomeneo’s incapacity in the face of destiny very much permeated Polenzani’s realisation. Stanislas de Barbeyrac’s more lyrical singing of Arbace suggested a character already resigned to the dictates of fate. Initially uncertain of themselves, the Chorus was convincing musically, even if the production does not stretch its dramatic potential.

Marc Minkowski sustains a convincing grasp of the symphonic sweep of Mozart’s score. He has forged his career with Les Musiciens du Louvre, but those allergic to ‘period performance practice’ would have found little to object to in his direction of the Orchestra of the ROH. Hardly anybody alive today could fill Colin Davis’s shoes in conducting Mozart’s operas (including previous productions of Idomeneo at Covent Garden) but Minkowski’s conducting does not particularly suffer by comparison. Sound was sometimes a little thin in the recitatives, and the sonority of the brass and the timpani with wooden sticks was sometimes raw. But otherwise there was much to enjoy. As for the production itself, like the rule of Idomeneo, it deserves to sink without trace.