Mussorgsky
Boris Godunov – Opera in seven scenes to a libretto by the composer after Pushkin [original 1869 version; sung in Russian, with English surtitles] 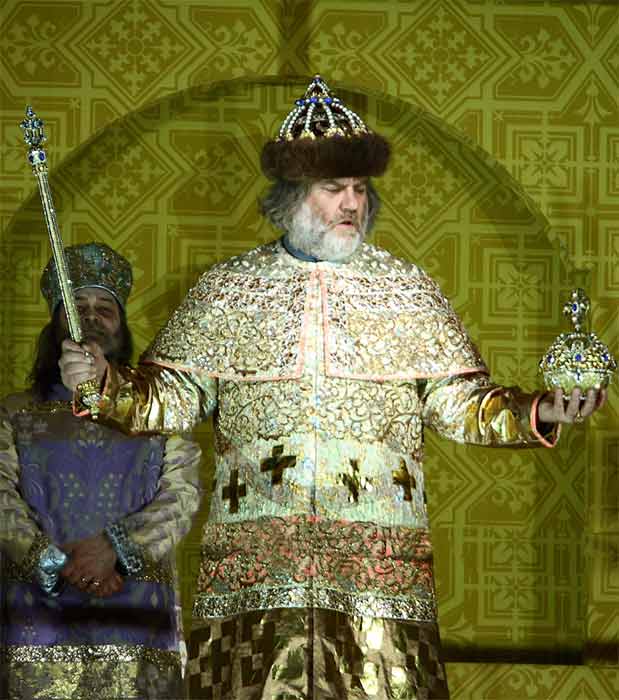 Richard Jones’s productions, in my mind, are – in part – synonymous with wallpaper. They tend to sport sets that include at least one memorable wall of patterned design forming a colourful relief to the action. How would Jones, and regular designer Miriam Buether, treat imperial Russia in the Royal Opera’s first-ever production of Mussorgsky’s original version of Boris Godunov? Forgive the pun when I report that they have added to their past successes with bells on. Literally!

The walls of the unchanging set are made up of embossed plaques of bells, matching a defining sound in Mussorgsky’s score, not least in the ‘Coronation Scene’. This bell motif adorning the surrounds in ebony-dark sobriety is leavened by a flash of colour in the elliptical arch that Beuther puts above. It is here – awash in a verdant green – that Jones’s production starts before a note has been played, in a dumb show showing how ninja-like assassins had killed Ivan the Terrible’s youngest son, Tsarevich Dmitry, while innocently playing with a spinning top. Down below, Bryn Terfel’s Boris is writhing in guilt, either as instigator of the child-killing (as popularly assumed) or, as regent, neglectful of ensuring the safety of the child.Throughout the staging the flashback is re-enacted to prey on Godunov’s mind even after he is persuaded to become Tsar.

This pre-show is matched by a similar ending high above the stage, this time played wordlessly over Mussorgsky’s slow, mournful final bars, with Grigory making his entrance, dagger in hand, against Boris’s son Fyodor and the boyars: Boris’s reign not having secured the succession thus leaving the State in some turmoil. Curiously Grigory and Fyodor look as if they could be brothers…

In between we have Mussorgsky’s original scenes (the 1872 revision adds to them) – Godunov’s doubts at acceding to the throne; his coronation; the monk Pivem’s fateful meeting with younger monk Grigory who is inspired to imitate the dead Tsarevich Dmitry and is henceforward known as the Pretender; Grigory’s escapade on the Lithuanian border trying to evade the guards aided by the comic turn of John Tomlinson’s drunken Varlaam; Boris’s hearing of the Pretender’s claim and furthering of his insecurities; outside St Basil’s Cathedral with the Holy Fool facing Boris, the latter asks him to pray for him; and Boris’s death scene. 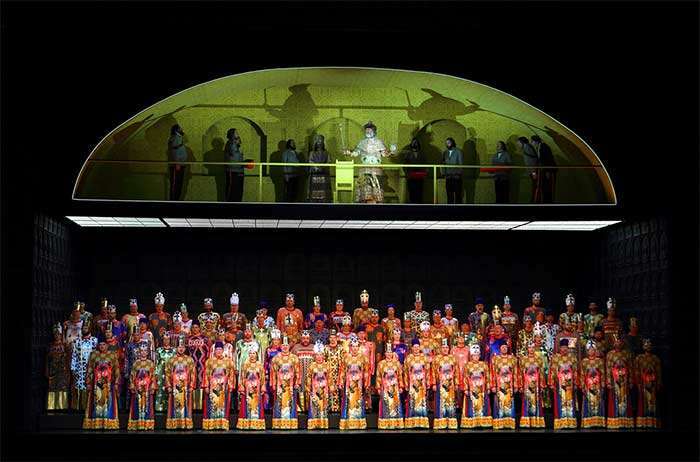 Jones presents these with minimal interference. Pivem’s history of the Tsars is represented by a large movable screen with four panels; a similar display illustrates a map of Russia that Fyodor is studying. The bar on Lithuania’s border with Rebecca du Pont Davies as its hostess is probably the longest I’ve ever seen. The only additional decoration of the bell-motif set is the row of Boris’s image as an icon, save the stepped podium that allows the 80-or-so Chorus a grandstand at the big events. Ben Wright’s tautly choreographed movement of these singers is similarly minimal but effective, especially as the peasants during the Coronation exit stage-left and, seconds later, enter stage-right in the most colourful of robes that adds a visual lustre to match Mussorgsky’s clangourous score (even if the electronic bells are occasionally too much).

Nicky Gillibrand’s costumes, mixing Mussorgsky’s period (the boyars in military-striped trousers, with grey jackets, all with matching parted hair and beards) with robes that seem to have been peeled freshly of much older Russian icons. There is a sense of history, without any self-conscious modernisms, chiming (sorry!) with Jones’s overall concept.

To match such a well-designed and directed Boris Godunov, Antonio Pappano conducts a gutsy account – from role-debutant Terfel to clear-voiced youngster Ben Knight as Fyodor. John Graham-Hall, like Terfel another regular Jones collaborator, is excellent as the equivocal figure of Shuisky, and two former Jette Parker Young Artists – Kostas Smoriginas and David Butt Philip – repay the House’s commitment to them in fine renditions respectively. Tomlinson proves that he can still dominate the stage, and making his House debut is Estonian bass Ain Anger, bringing a sonorous gravitas to Pimen.

Played without interval there is a cumulative power to the narrative thread, matching Mussorgsky’s music. On this opening night it was watched with pin-dropping attention and greeted by an acclamation that was entirely deserved.