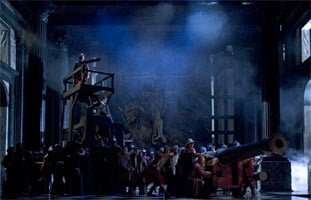 The explosive energy with which Sir Antonio Pappano opened his account left no room for doubt: the screw in this Otello would be turned with a rare, inexorable savagery. And so it proved, when following the rage of the opening storm Verdi’s cruel parade of human frailty was subjected to a pitiless forensic examination by the maestro. It defies belief that Pappano could elicit such passionate and musically astute commitment from his Royal Opera forces a mere twenty hours after the final curtain of Berlioz’s Les Troyens, an epic undertaking.

Pre-show chatter of the ‘will-she-won’t-she’ variety had surrounded the appearance (or otherwise) of Anja Harteros as Desdemona. In the event she not only showed up, she spun lines of vocal gold from Verdi’s pages. The German soprano’s physical incarnation may have been unremarkable but her characterisation was all there in the sound, as she evolved from Otello’s trusting, loving wife to a doomed soul, extraordinarily moving in her despair. Harteros is blest with an instrument as powerful as it is beautiful, and her capacity for vivid coloration a marvel. 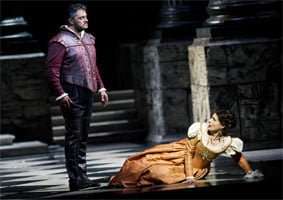 Her Otello, Aleksandrs Antonenko, is burly of voice and of physique. It is exciting to discover an Italianate tenor of such ringing vocal strength (the high-octane tessitura, which many illustrious predecessors have found so daunting, carries effortlessly above the orchestra) but as yet he does not bring enough emotional nuance to bear on a personality who should be so much more than a gullible sap. The veteran of several previous productions of Otello, Antonenko has certainly had plenty of chances to get the measure of the role; but although he sings the part superbly he does not yet live it. He is a tremendous talent, though. If he were to be cast elsewhere in a more psychologically challenging production than this one by Elijah Moshinsky, the Latvian would have the opportunity to burrow more deeply into the pride and the passion that drive Otello towards his folly, and he might then return to Covent Garden able to offer a more rounded interpretation. 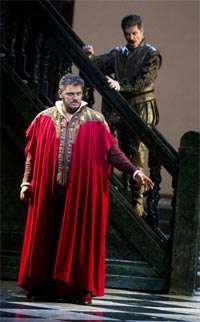 Moshinsky’s staging, now a quarter of a century old, remains perfectly serviceable. It has the twin advantages of context and clarity, the one quality often feeding the other, as in his emphasis on Catholic iconography to underline the fervour in Desdemona’s ‘Ave Maria’ (and, arguably, to emphasise Iago’s satanic credentials during his perversion of the ‘Credo’). The production’s abiding problem, however, is its grinding need to illustrate every note of the music, beat for beat. Every musical shock and shimmer has its visual equivalent. It is an approach that bogs the opera down and keeps the mounting tragedy in check. Nevertheless, Moshinsky’s approach is always intelligent and Timothy O’Brien’s elaborate yet functional decor houses it in a satisfyingly ambivalent environment – regal and forbidding in equal measure.

Lucio Gallo was on lip-smacking form as Iago. He was at his vocal best while plotting hugger-mugger or when exploding into nervy action, and only in more lyrically-flavoured episodes such as the Act One drinking song, “Chi all’esca ha morso”, did a lack of melodic ease impede the vocal flow. Overall the darkness of Iago was not completely conveyed, but there was still plenty to admire and enjoy in Gallo’s intense performance.

Minor roles were well taken, with Antonio Poli a splendidly plausible Cassio and Brindley Sherratt a statesmanlike Lodovico (an essentially reactive role and thus not easy to perform), but as so often the highest praise belongs to the Orchestra of the Royal Opera House and its inspirational Music Director. On this occasion Antonio Pappano wrought a febrile, restless performance that the members of this great orchestra played as one.