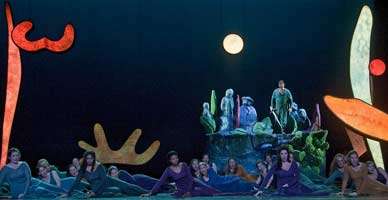 This was Royal Opera’s first revival of its 2001 production of “Parsifal”, a staging shared with Teatro Real Madrid, although its original incarnation was a 1990 production for Netherlands Opera. Even on its first outing it was not a very distinguished production, and in truth it now seems even more dated. That is not to say that there is not much to treasure in this revival which was extremely strong both orchestrally and vocally.

One of the great boons is the return of Bernard Haitink. We last encountered him conducting “Parsifal” in this house when he was Music Director. The production then was Bill Bryden’s, one that was not critically acclaimed and was never revived. Haitink had a good cast then (Robert Lloyd’s Gurnemanz and Waltraud Meier’s Kundry stand out in the memory) and probably has an even better and balanced one now. The Orchestra of the Royal Opera House seems to be on something of a Wagner ‘high’ at the moment. Following excellent and exciting performances in the autumn’s four ‘Ring’ cycles, the musicians now produce wonderfully translucent yet velvety textures for “Parsifal”. The pastoral moments of this score, generally featuring woodwinds, emerged from the pit with clarity and cohesion. There was some fantastic oboe- and flute-playing and the more dramatic outbursts were thrilling in their immediacy, the strings managing to sound ethereal and luminous in the outer acts, and suitably astringent and sinewy in Act Two when the action centres on Klingsor’s domain. Only the electronically transmitted bells do not meet up with the standards set elsewhere, although they were better judged in the final act than in the first. 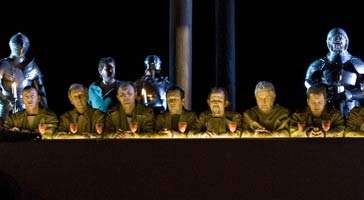 Haitink’s way with the score is generally very singer-friendly, and he keeps the pace of the drama on the move, relishing the thematic and emotional developments without milking them artificially. He also allows the singers to really get their words across, a blessing as one’s interest is maintained through the incredibly undramatic and static production. The opening scenes in the forest worked pretty well, but once inside Montsalvat the dramatic tension sagged, largely because once all the knights were assembled they remained seated at their tables, and so the musical depiction of movement during their Grail rituals was not mirrored on stage: odd as the director had managed the tricky transition from forest to castle rather well.

The same is true in Act Two where the flower maidens simply lay undulating on the floor, rising slightly to sing, and then lying down again, the potential entrapment of Parsifal completely lacking. And so it continued. The charged duet between Kundry and Parsifal is statically staged, Kundry singing into the auditorium from the front of the stage with poor Parsifal positioned to the rear until he needed to come forward for the kiss. At the opera’s close, even the depiction of the realm of the knights teetering on the brink of a terrible coup was devoid of any physical or visual menace. Stillness has its place in Wagner – but this is taken to extreme here. Some of the effects such as the collapse of Klingsor’s realm and Parsifal’s retrieval of the spear remain risible. It is almost a ‘concert performance’. 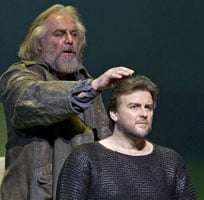 The singers survive this. Sir John Tomlinson turned in another of his detailed, dynamic and theatrical performances, making every word tell, and keeping the interest through Gurnemanz’s long narrations. Yes his voice may sometimes be a bit threadbare at the top and not absolutely focussed, but the sheer intelligence and completeness of his portrayal silence any criticism.

Christopher Ventris as Parsifal also made a strong impression. His is the perfect voice for the part; it rings out clean and true and with fluidity. The staging does not give him the chances to make much of the character in the first two acts. Indeed it left him looking rather gawky and ill at ease – rather than wild, reckless and uncomprehending. However, his portrayal of the world-weary Parsifal arriving in the forest at the start of the final act was touching and his performance grew in stature from then on. 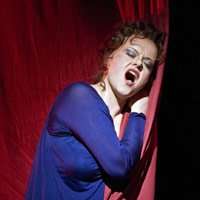 Petra Lang could be one of the world’s reigning exponents of Kundry, for her voice sounds at its best where the majority of the role lies. She has a lovely velvety tone, resonant low notes and a secure and exciting top register. “Ich sah das Kind” in Act Two built up impressively and her vocalising of her encounter with Christ was thrilling. We know her to be a dramatic and theatrical performer, but she suffered terribly from the poor direction here, and so this pivotal moment did not have the impact it should. After some of the soprano-ish roles she has undertaken of late, it is good to once again hear Lang taking a part that suits her.

Falk Struckmann was making a rather belated Royal Opera debut as Amfortas. Having to deal with a huge prosthetic wheeled wooden arm and sing well cannot be easy, and perhaps this explained his rather extrovert performance as the suffering fallen King. “Wehvolles Erbe,..” was well sung albeit at a fairly unremitting forte, and thus did not plunge the emotional depths it sometimes can. He fared better in Act Three where his individual timbre and rather more nuanced singing suited the desperation of his plight and the sorrow at the death of his father.

Willard W. White reprised his Klingsor, seen in this production when new and also in the Bryden one. It is a part that suits his incisive and rich tone well. It was also a pleasure to hear the immediately identifiable timbre of Gwynne Howell emanating from one of the suits of armour. It’s a shame that Titurel does not have much to sing!

In the smaller roles Royal Opera has cast from strength from its Young Artists programme, and this meant the esquires and flower maidens were credibly young-looking. Krzysztof Szumanski’s Second Knight made an unusually strong impression. The chorus was also in fine fettle, not that these singers were visible much, and only the slightly ill-pitched tuning of the children marred things.

Ultimately the evening was very satisfying because the musical aspects were so well handled – if the production had lived up to those standards, this would be a “Parsifal” hard to beat.