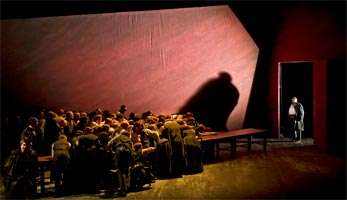 An initial buzz of discontent greeted the previous Peter Grimes at this address, the austere production by Elijah Moshinsky that famously offended Britten himself and was the first in memory to turn its back on the sea. My, how quaint such rumbles seem now as its usurper, Willy Decker’s ground-breaking version (created for La Monnaie in 1994 and first seen at Covent Garden in 2004) receives a belated revival. This new run of performances is dedicated to the memory of Robert Tear, Philip Langridge and Anthony Rolfe Johnson, all of whom sang the title role at one point or another during the Moshinsky era, in a gesture that draws a line not just under the second generation of Britten tenors but under their productions too. Nowadays, bold new approaches are illuminating Britten’s operas afresh and each of London’s two main houses is able to boast a world-class Peter Grimes for the modern era.

The Decker line is pure Expressionism; his theme, paranoia. It’s Grimes versus the world as the villagers become the very demons that infest his mind. Throughout the opera, this Borough boils like the sea with shoals of hostile gossips who are rarely still and sneer constantly; the fisherman is not just an outsider, he is mentally ill and increasingly disturbed – and everything we see is filtered through his troubled eyes. In Montagu Slater’s libretto Grimes talks of little else but his accusers; this production places them centre-stage. 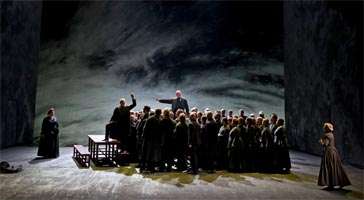 The Expressionistic approach also helps makes sense of Grimes’s Act One soliloquy, “Now the Great Bear and Pleiades”, a near-metaphysical text that is way too abstruse for such a hard-handed man, however poetic his soul. In Decker’s version these are not words he articulates or conceptualises; they are an emblem of his interiorised existence, sung in the isolation of a crowded bawdy-house. With our modern fondness for labelling misfits from our armchairs we would probably define Decker’s protagonist as semi-autistic with psychotic tendencies, so the difficulty experienced by Ben Heppner (returning as Grimes) in sustaining the pitiless tessitura scarcely matters because the singer’s strain deepens the sense of a mind in turmoil. 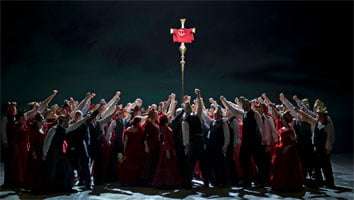 If Heppner’s struggles with Britten’s vocal demands must be acknowledged, so must his engagement with the role, which remains as majestic as ever. The same can be said of Amanda Roocroft’s Ellen Orford: her squally moments, and there are several, have a valid place in the context of her passionate interpretation (if anything more intense than for David Alden and English National Opera two years ago). The supporting cast is strong throughout. Jonathan Summers has been singing Balstrode for decades – his performance in the Colin Davis/Jon Vickers version was recorded thirty-three years ago! – yet he is on fine form in this weathered, oak-matured reading; Roderick Williams is a suitably oily Ned Keene (and a Balstrode-in-waiting too, on this showing) and Jane Henschel an emotionally strident Mrs Sedley. Best of all are the trio of women who “comfort men from ugliness”: Catherine Wyn-Rogers as the outwardly respectable Auntie, and the hyperactive pairing of Rebecca Bottone and Anna Devin as her professional ‘Nieces’.

The Royal Opera House Orchestra plays efficiently for Sir Andrew Davis, although as a team they lack the visceral impact of Edward Gardner’s reading for ENO. The Royal Opera Chorus, by contrast, fully lives up to its prominent status within the staging. The choristers’ collective performance is revelatory, with valiant singing, vivid ensemble acting and with a clarity of diction that sends the words leaping across the footlights. Chorus Director Renato Balsadonna’s cap, already stuffed with feathers, gets another one for this production.

John Macfarlane’s viciously raked stage is the monochrome grey of winter light and cold East Anglian stone; the only colour that intrudes is brothel-red. Grimes’s new apprentice (Patrick Curtis, an assured young actor) is way too small to be much use on a fishing boat but that’s all part of the concept – for Decker’s production, expertly revived by his regular collaborator (François de Carpentries) constantly accentuates the child’s vulnerability. He clings to Ellen for protection, and even to his gruff master when the terror becomes too great, all of which makes his unintended death the more unbearable for the audience – and for Grimes himself, too, when lucidity strikes.