Adès
Powder Her Face, Op.14 – Chamber opera in two acts to a libretto by Philip Hensher 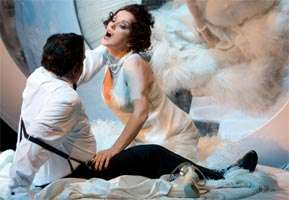 It’s hard to believe that Thomas Adès’s shock opera is now 15 years old, and the passage of time has served “Powder Her Face” very well, far better than it did the notorious Margaret, Duchess of Argyll. Adès’s audacious, precocious brilliance – he was a mere 24 in 1995 – was much written about at the time, and there were some misgivings over Adès and his “blow-job opera” being too clever by half. 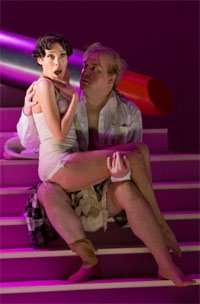 Carlos Wagner’s staging leaves you in no doubt about the downfall of the Duchess, with Conor Murphy’s set of a sweeping staircase providing a clear metaphor. The giant powder compact, lipstick and eye-liner speak volumes about the mystique of feminine allure – the designs may be a bit too stylised for some tastes, but they fit the Duchess’s over-the-top story like a glove. And as for the unspeakable sex-act itself, the naked young man, an unattainable fantasy sex-object erupting out of the Duchess’s sub-conscious, is very much to the point – as any highly motivated seeker after love will confirm.

Joan Rodgers gets something truthful and tragic out of the Duchess. She completely understands where the composer and his librettist Philip Hensher are coming from in terms of the sensibility of their outlandish, outsider tragedy queen, but she also manages to suggest the utterly conventional, totally bored, affection-free reality. Hensher’s libretto makes that aspect of the role much clearer, but most of the words were inaudible – and those that could be heard left you, a bit like the Duchess, gagging for more. It was very frustrating, and slightly undermined the grandeur of Joan Rodgers’s commanding performance, full of hauteur, desperation and tristesse.

Rebecca Bottone was every above-the-stage inch the Helden-soubrette Adès calls for in her various roles, an astonishing, high-energy performance; and Iain Paton, the object of the Duchess’s perfunctory lust, multi-tasked with the same tireless versatility. Alan Ewing pleaded a throat infection, but it didn’t affect his baleful performance as the Judge, and the doom-laden presence of his Hotel Manager owed a lot to Britten’s “Death in Venice”. The orchestral playing and Timothy Redmond’s conducting were amazingly quick off the mark with Adès’s hugely skilful mixture of reference, pastiche and parody, and special mention should go to the wonderful tango accordionist, Eva Zöllner – tired, wheezy, a bit murky. A bit like life, really.