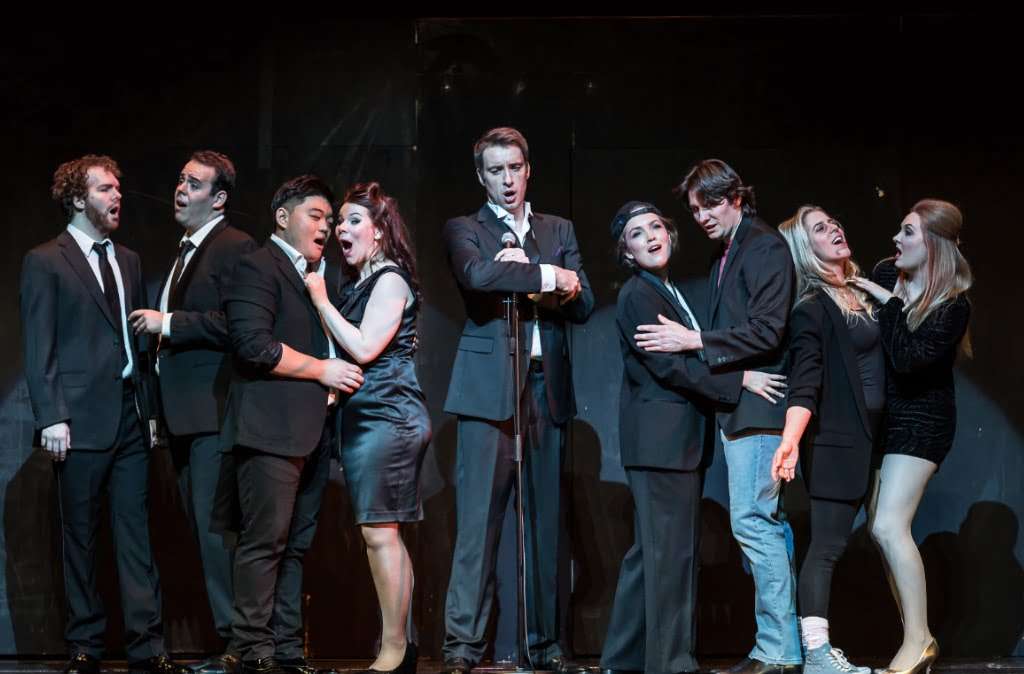 In something of a heady mix for a Sunday lunchtime, although subverted by perhaps the most extraordinary volt-face in opera I’ve ever seen, the fourteen current members of the Royal Opera’s Jette Parker Young Artists scheme showcased their considerable talents.

What was impressive was not only the standard of performance but also the conception of the programme – excerpts from five operas, two of which are real rarities – carefully selected to highlight each singer but also to hang together in a satisfying whole, beginning and ending with the more positive side of love, with dire warnings of inherent tragedy elsewhere.

We started with the epitome of young love, the scene in the garden at night from the second Act of Janáček’s Kát’a Kabanová. Without any further information (although a scene-setting synopsis was provided in the programme), this turns out to be a stand-alone gem, where it is clear immediately what is going on (albeit with the help of surtitles). And, as marshalled by Richard Gerard Jones, the four singers – David Junghoon Kim, Emily Edmonds, Samuel Sakker and (following her Proms appearance the night before in Boris Godunov) Vlada Borovko – conjured up all the carefree ardour you could wish for. Kim’s ardent tenor invested Kudráš with immediate likeability, switching on his transistor to sing his folk ditty and hand-jiving in the refrain, with Edmonds’s cheeky Varvara egging Borovko’s at-first timid but blossoming Kát’a in accepting Sakker’s diffident Boris in his achingly tentative expressions of love. Janáček’s wondrous score (with celesta provided by JP répétiteur Colin C. Scott) has never sounded so amorous in Paul Wynne Griffiths hands. 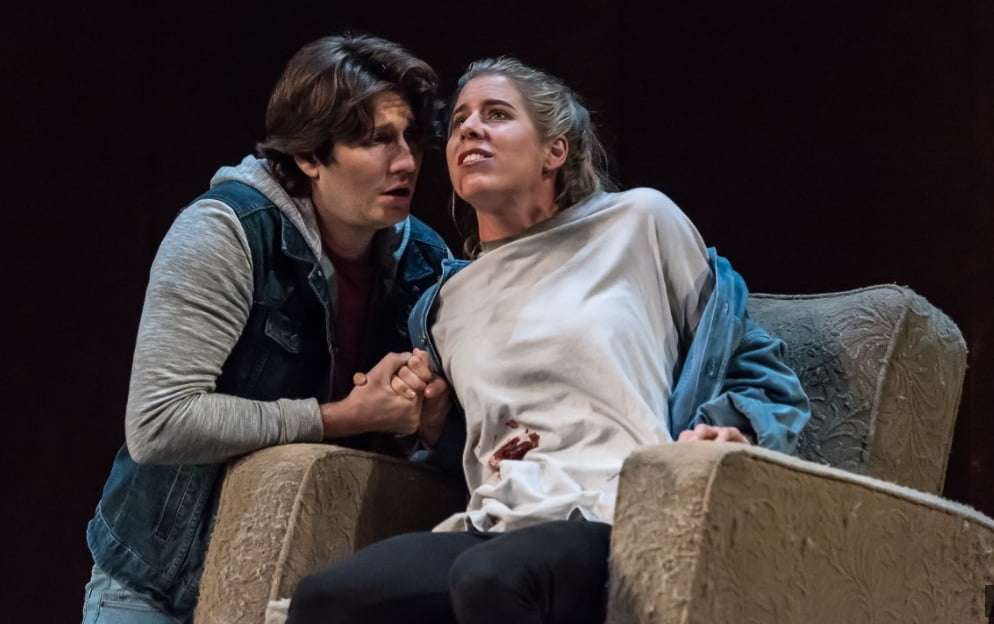 Set in front of a black wall, with one door, Janáček’s idyll made way, seamlessly, for Gounod and the second tableau of Act Four of Mireille. Distractedly Lauren Fagan’s heroine stumbles through the door, going mad at the news that her lover Vincent has been wounded in a fight. Her journey through the desert of the Crau to their agreed rendezvous is accompanied by ‘Voici le vaste plaine’; Fagan rising to the hair-raising heights of Gounod’s writing, egged on the mirage of Vincent (acted by Samuel Dale Johnson) and watched by medical staff who eventually confine her to a wheelchair. There was thrilling singing and it was all very ably conducted by former JP Artist Paul Wingfield.

Costumes were modern, each half ending in evening dress. I wasn’t quite as convinced by the setting for Tchaikovsky’s Eugene Onegin (opening in an art gallery, with just three pictures), despite the fine singing. Jennifer Davis’s Tatyana, not requiring the audience’s indulgence (as initially requested by an announcement by Kasper Holten, because of the onset of a cold), effortlessly matched James Platt (another contributor to Boris Godunov) as Prince Gremin, who had the most famous aria of the show. It must be a wonderful aria to sing, and Platt was very affecting in the delivery. In contrast Yuriy Yurchuk’s straight-backed Onegin was the epitome of an egoist, a character who (for once) gets his comeuppance when Tatyana has the strength of resolve to reject him as he once rejected her. Jones enhanced the crushing blow on Onegin as the lights lowered behind him and suddenly thrust him into the cold hard glare of reality. Jonathan Santagada had the measure of Tchaikovsky’s score; with a sweep that would have been nicer if we could also have heard the ‘Polonaise’ that opens Act Three.

Back from the interval our second rarity was a very well-known tale but in unusual operatic garb – La bohème, not by Puccini but by rival Leoncavallo. The fourth Act is more compact than Puccini’s – Mimi returning to the artists’ garret dying of consumption. But it has its own dramatic pulse, with the principal departure to Puccini being that Rodolfo is a baritone (here Johnson, slouching around barefoot in jeans, despite the references to how cold it is). With Sakker as Marcello (pining for Musetta) and David Shipley as Schaunard, Rodolfo is shocked at Mimi’s appearance, Fagan crawling to the armchair before Leoncavallo’s rather urgent dispatch of her, only moments after Edmonds’s no-nonsense Musetta arrives. 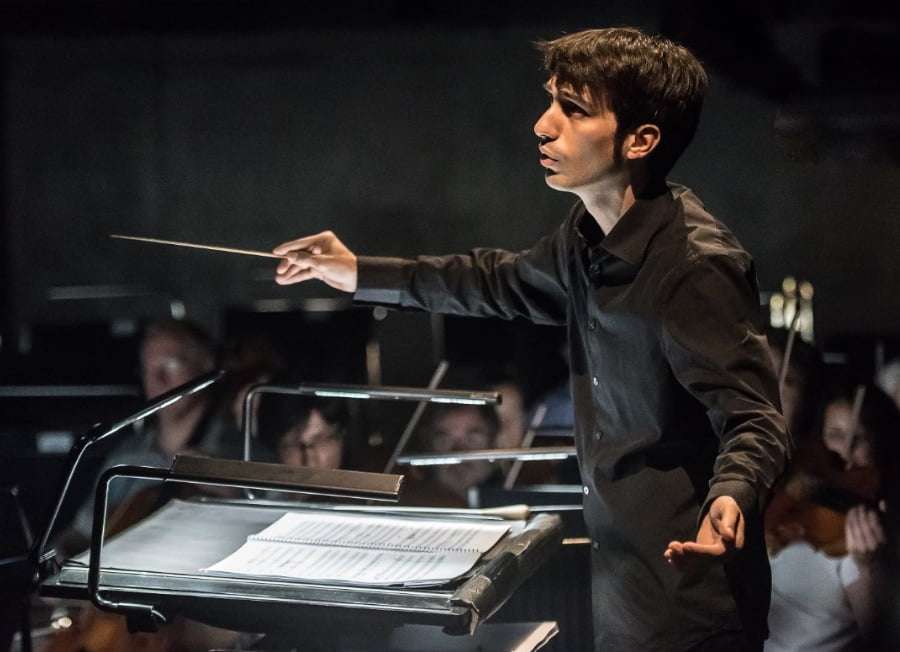 Fagan’s collapse and death-throes left the audience shell-shocked. But there was no time to draw breath before Borovko entered in black party-dress and champagne bottle in hand to flip the mood instantaneously as Rosalinde from Johann Strauss II’s Die Fledermaus singing topped by ‘Brüderlein, Brüderlein und Schwesterlein’.

It was a rousing conclusion (Paul Wynne Griffiths in the pit for the whole of the second half) and if the only thing that didn’t work was Johnson unable to get his dinner jacket on over his red T-shirt as Rodolfo, having to discard it totally. There was much hard work put in by all the participants and confirmed the continued excellence of the Jette Parker Young Artists initiative.