Gianni Schicchi – Opera in one act to a libretto by Giovacchino Forzano after a pasage from Dante Alighieri’s narrative poem Commedia Part 1: Inferno

[All operas sung in Italian with English surtitles] 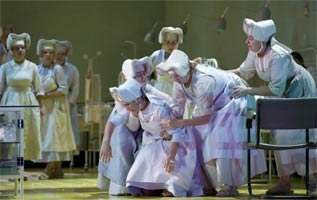 Suor Angelica doesn’t have many friends. Too pious for most tastes, this suicidal saint of a nun, which may explain why the new Royal Opera season opens with only its tenth-ever performance of Puccini’s triptych centrepiece, as against twenty-one and fifty outings respectively for the outer flaps. Now though, thanks to the directorial ingenuity of Richard Jones, that shortfall is likely to be corrected; for in rendering this sentimental opera palatable for today’s less religiously craven audiences Jones has traded the cloying odour of incense for something altogether more bracing: Christian care and carbolic soap. In his production, Puccini’s sisters of mercy run a sick children’s ward where herbal remedies appear to cure all ills (and to judge from the bouncy demeanour of at least one of the little invalids on opening night, perhaps they do).

As Angelica, Anja Harteros withdrew from this production at an early stage of rehearsals, citing ill-health. It’s a pity the good sisters weren’t around to administer some restorative plant to the German diva, because while her replacement, Ermonela Jaho, gives a half-decent performance, her vocal qualities cannot address the full range of Sister Angelica’s emotions as Puccini wrote them. The Albanian soprano is splendidly seraphic as the flora-savvy ward sister, but during her confrontation with the nerve-shredded Princess (Anna Larsson in a formidable cameo) she lacks the necessary vocal power to convey her suffering. At Angelica’s great outburst, “Tutto ho offerto alla Virgine” (I have offered everything up to the Virgin), she is a bereaved mother in extremis: no longer the demure nun but only a snarl short of a Tosca. Unfortunately Jaho, whose pianissimo is sublime, loses crucial clarity whenever the going gets tough.

Jones’s relocation of the opera’s locale benefits from an evocative hospital set by Miriam Buether. It’s a hive of activity where the palliative care may be tip-top but the children’s emotional wellbeing takes a hammering, nowhere more so that at the opera’s conclusion. No matter: Jones’s reinterpretation of Puccini and Forzano’s closing ‘miracle’ is itself quite miraculous: a solution tinged with genius, over which we should draw a wimpled veil. 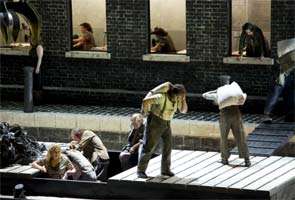 The nuns would take a dim view of the goings-on in the outer operas of Il trittico, although the dark tale of jealousy and misguided revenge that opens the evening is a small masterpiece. Set among the stevedores of the Seine, Il tabarro (The Cloak) is concise and evocative – almost a tone poem in the ebb and flow of its orchestral tide. Antonio Pappano coaxes a ravishing, impressionistic sound from the Orchestra of the Royal Opera House (its players are on toe-tip form for their Music Director in all three operas) and in so doing he steeps the drama in a mood of latent threat. The score’s echoes of Ravel are startling, the drama’s looming tragedy inevitable. Most conductors take a visceral interpretation of this score, but not Pappano: he eschews starkness in favour of layered aural shading, something which lends a troublingly matter-of-fact quality even to the murder scene. The production agrees with him. 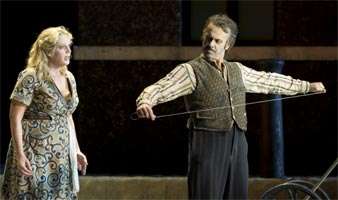 On a realistic, near-monochrome set by Ultz with superb crepuscular lighting by D. M. Wood, Eva-Maria Westbroek’s Giorgetta is a wretched soul who is aroused by the macho Luigi (Akeksandrs Antonenko, magnetic, and Otello later this ROH season) from the gloom of a loveless marriage and from mourning her dead child. Her husband, Michele, is played by Lucio Gallo not as a brawny manual worker but as the pen-pushing boss of a failing business. He is too self-absorbed to register his wife’s unhappiness, unlike one of his workers. In a brief aria of frustration Giorgetta restlessly shifts her balance from hip to hip and sings with a languor that ignites Luigi’s desire and unleashes their impulsive mutual attraction with the fierce duet “O Luigi! Luigi!”. It is a beautifully conceived dramatic moment and typical of Richard Jones’s attention to the physical detail of these performances

Human frailty of a different sort underpins the final work, the spirited romp that is Gianni Schicchi. This production from 2007 is already receiving its second revival, this time joined by its intended Il trittico brethren, and from the moment the curtain rises on John Macfarlane’s intentionally hideous set we know we are in for an hour of unbridled pleasure. For pure hilarity Liam Steel’s recent, brilliant Commedia-inflected production for English Touring Opera has the edge, but this Royal Opera production is a joy in its own right.Lucio Gallo follows Bryn Terfel and Thomas Allen in the title-role, and as the first Italian singer to lead this production he is a Schicchi to be reckoned with: a decisive, faintly prissy character who despises the family that hires him to fake a dead man’s will, and who in turn defrauds the frauds. 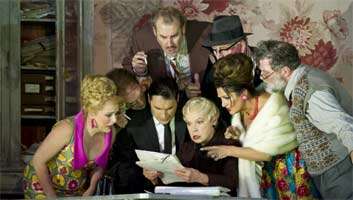 Gallo’s vividly-etched and -sung performance is surrounded by a delirious ensemble of starry names, Marie McLaughlin, Rebecca Evans and Alan Oke among them, but a special nod goes to Francesco Demuro who makes something out of nothing as the romantic juvenile lead, Rinuccio.

Puccini’s only opera buffa is staged with a sense of pure pleasure as, once again, Jones proves himself the directorial god of small things. Moments such as the annoying child who repeatedly crashes a toy car into the wall, or the disembodied hand of Daddy that Lauretta (Ekaterina Siurina) so winsomely cajoles during the famous aria “O mio babbino caro”: these and countless other felicities make for a wonderfully entertaining finale. Il trittico – a gruelling endurance test for the audience? Not a bit of it. Four hours and two intervals after we took our seats we were falling off them.