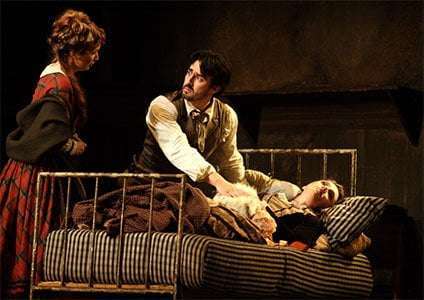 A double celebration marked this return of Puccini’s La bohème – in John Copley’s staging – as it marks the 40th-anniversary of this production (only the second-ever by The Royal Opera). These achievements were done justice to with a performance full of feeling and artistic integrity. Kasper Holten had it right when he spoke from stage-centre before curtain-up: when one thinks of La bohème, one thinks of this production. Everything feels right. The garret of the four young Bohemians is a lived-in space, every nook and cranny occupied; the Café Momus is set within a bustling Paris, occupied by people of all walks of life; and, in Act Three, snow falls gently whilst smoke rises from a chimney. It is a glorious realisation in these ravishing designs by the late Julia Trevelyan Oman, and is beautifully and sympathetically lit by John Charlton.

The Royal Opera has assembled a well-matched cast, both in voice and temperament. It was this equality-amongst-singers that was unusually noticeable, whether apposite contrasts or with a unison that made more than the sum of the parts. Ermonela Jaho was a humble Mimì, which she interspersed with flashes of confidence and romantic ardour, which contrasted with Simona Mihai’s Musetta so well, a Musetta with a degree of insecurity, masked by that confident and forceful personality. Her recognition of Rodolfo and Mimì’s love in Act Four made for a touching moment. 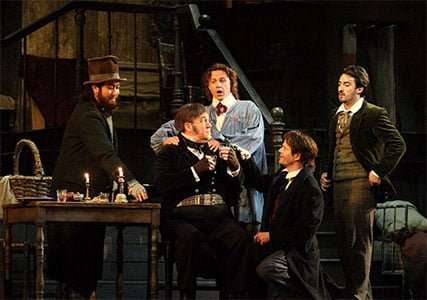 Charles Castronovo really looks the part of the poet Rodolfo: dashing, with a hint of being a schmoozer, he nevertheless makes his desertion of Mimì not for another woman, for his is the action of a young man not knowing his future: he is vulnerable. His scenes with Jaho were spine-tingling. Impressive too were the rest of the Bohemians: Markus Werba a proud painter (Marcello) and the philosopher of Jongmin Park made a marked impression, his ‘overcoat’ aria beautifully poignant. Daniel Grice, as the musician Schaunard, gave his reposts-and-parries a good dose of fun. ROH stalwarts Donald Maxwell and Jeremy White (the foursome’s landlord Benoît) enjoyed their brief turns, and delivered the put-upon comedy with aplomb.

Making his debut at the House is Cornelius Meister. He led a powerful and emotional reading of the score, sympathetic to the singers’ needs, and at the service of Puccini: this was with-feeling, the emotions acted out on the stage being fed by the sounds from the pit. He also highlighted the tenderness of the music, with details such as the flickering candle made lucid in the music.

As usual, clapping mid-Act spoilt the end of the arias, and the second interval really needs to go. Well, maybe that is something Richard Jones will ditch when we see his vision of this masterpiece after the final revival of Copley’s. Yes, after a few years of rumour, it is now confirmed: the summer 2015 staging is to be this production’s last.