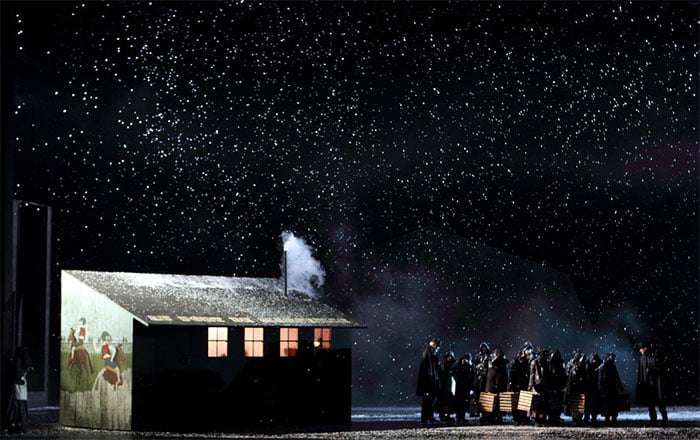 Once you have got used to his trademark stylisations and visual jokes, Richard Jones has also always revealed a cleverly tailored affection for whichever opera he is directing, but it took a while, towards the end of Act Two, for this to register in Puccini’s La bohème. Royal Opera audiences have had four decades to get used to John Copley’s solidly traditional production, which was retired in 2015, so we will have to wait a while to see whether Jones’s new if not-so-different approach to Puccini’s tubercular tragedy lasts as long.

Jones can be superb at squirreling out characters’ motivation, and Stewart Laing’s mobile sets reinforce Jones’s plan. Jones is also not afraid of the big Broadway gesture, as the artists’ Act One garret, a cut-away section of a chic loft with exposed rafters, glided out of the gloom to the front of the stage, with its absence of bohemian clutter asserting style over verismo, and it keeps the audience at a distance. 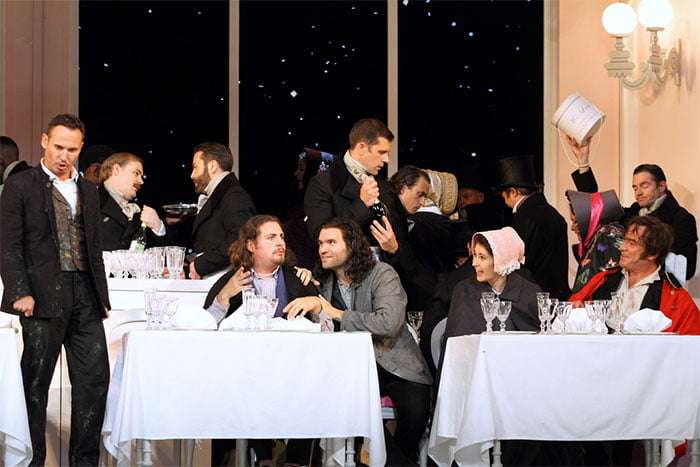 If that is minimalist, the over-romanticised nineteenth-century sets for Act Two’s Café Momus are almost absurdly lavish and contrived – three highly decorative shopping arcades moving slowly sideways to make room for a Parisian restaurant of one’s dreams, luxuriously capped for a duration of just a couple of minutes by the sudden appearance of an avenue of streetlamps and a military band piling on the Christmas cheer. It’s impressive and, with Laing’s sumptuous costumes and a high bonnet-alert, very colourful – virtually the only blast of colour in the entire show – although Jones still finds room for some signature chorus direction.

If Act Two had been so busy then it was hard to follow what was going on between Musetta, Alcindoro and Marcello in Act Three’s bleak isolation – a seedy bar, Paris lurking in the background and lots of snow drifting down – here Jones got down to the basics of the story with brutal clarity, which, after a clunky set-change back to the garret, continued with Mimì’s unsparing death-scene in Act Four: Jones just about pulled off his and Puccini’s striving for tear-jerking sentiment and objective asperity.

Nicole Car performed Mimì as a grey wraith, with a tenuous hold on life from the start. Her tight vibrato floats a lovely, fragile and volatile sound, the top of her voice has more character than her rather monochrome comfort zone and she was not exactly generous with her top-C “amor” that closes Act One. Put against that, though, her Acts Three and Four, which were really wither-wringing. If Mimì’s ‘O mia vita’, when she realises her number is up, doesn’t work, then any Bohème is sunk, and Jones and his singers got this and the ensuing two duets (Mimì and Rodolfo; Musetta and Marcello) absolutely right. 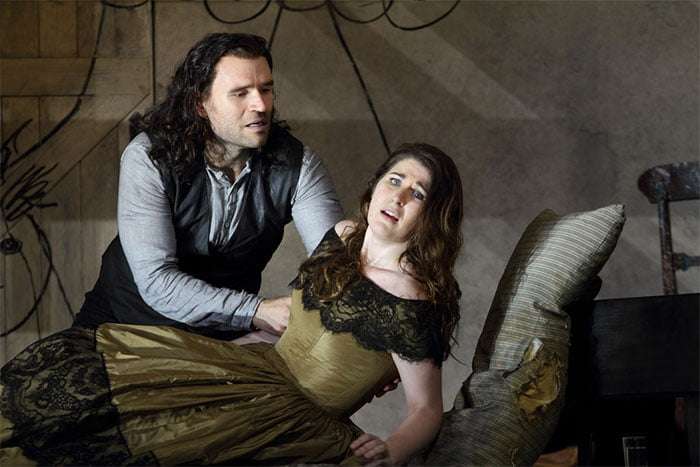 Michael Fabiano can do any amount of romantic ardour, so it was strange that his handsome Rodolfo was more of a Lothario than an idealistic poet-dreamer who suddenly falls in love, as though it was his character, rather than the story, that is larger than life. There was no doubting the volume and range of his singing, but his wracking sobs at the end were less convincing. The tortured on-off Marcello-Musetta relationship, though, was brilliantly portrayed by Marius Kwiecień and Simona Mihai (who is singing Mimì at the end of the run). Kwiecień was magnificent in his exasperation over and irrepressible desire for Musetta, and Mihai made up for a lack of vocal plushness with a fine comic turn in Musetta’s waltz. Colline and Schaunard, well sung by Luca Tittoto and Florian Sempey, barely registered until Act Four, and Jeremy White was a caricature Dickensian plutocrat as Benoît.

With fitful focus on the stage, the evening needed the superb playing and Antonio Pappano’s inspired conducting to hold everything together. I wonder when I last heard the opening to Rodolfo’s ‘O soave fanciulla’ given with such expectancy, or was treated to so much detail performed with unaffected authority.