Puccini
Tosca – melodramma in three Acts to a libretto by Giuseppe Giacosa & Luigi Illica, based on the play La Tosca by Victorien Sardou [sung in Italian with English surtitles] 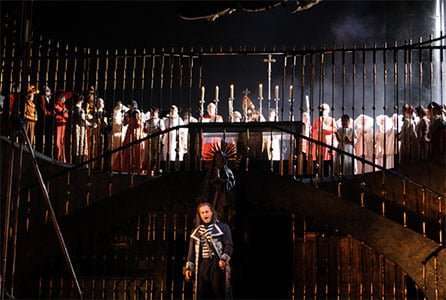 The more I see Jonathan Kent’s eight-year-old staging of Tosca (this is its sixth revival), the more it seems to merge into the Zeffirelli production, which, incubus-like, possessed the Royal Opera House for most of the second half of the last century, to the extent that Kent’s still raises ‘if-it-ain’t-broke’ feelings. Massive and dark, complemented by some Stygian lighting, Kent’s direction and Paul Brown’s designs go over the top with the melodrama, and it’s a neat device having the Attavanti chapel in Act One buried like a prison-cell beneath one of the altars of Sant’Andrea, a creepy conduit for Scarpia’s murky power-games with church, state and sex.

As for the dark wing suspended over the Castel Sant’Angelo in Act Three, apart from its baleful presence, it’s not clear what it’s there for – and also it is only selectively visible, depending whether you’re in good or not-so-good seats.The staging dwarfs everyone, and the pleasure for the audience lies in how the singers use that to their advantage – which, with some of this cast, is not brilliantly. As Tosca, the Ukrainian soprano Oksana Dyka lacks nothing in vocal heft and penetration, even if there’s little variation in her voice’s hard edge; but her acting was what might politely be described as opera-generic. It didn’t help that her cocoon of a costume with its long train imposed a maddening amount of flouncy frock-twirling, and any movement was taken at a stately pace, whatever degree of passion, fury, jealousy or worse Tosca was enduring. Dyka is not yet 40, but her uninvolving acting and immobile expression belong to the stand-and-deliver style of a mostly bygone era. At best, her ‘Vissi d’arte’ was just a well-sung number, but there was no sense that here was a mercurial, vulnerable, egotistic diva at the end of her rope. Also, is it right, in such a hyper-realistic production, that Tosca would have been visibly present at the ‘mock’ execution? 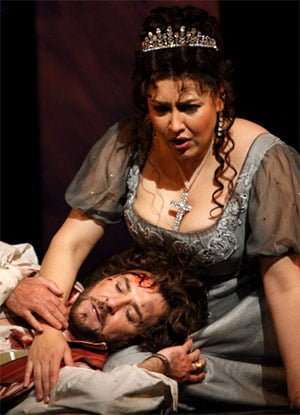 Perhaps she didn’t feel sufficiently menaced by Marco Vratogna’s Scarpia? Vratogna looked the business in Scarpia’s coat with all its blingy frogging, and he projected the evil Chief of Police’s bleak presence effectively. In Act One he didn’t quite have the authority and volume to ride Scarpia’s majestic subversion of the ‘Te Deum’, but he certainly delivered in Act Two, with an incisive ‘Ha più forte’ and a wonderfully focused circling round his prey. In the end, though, I missed the inky-black, life-denying malevolence that Scarpia – as with Iago or Claggart – should radiate.

As Cavaradossi, Roberto Alagna was on great form, and he raised the temperature of what would otherwise have been a lacklustre evening considerably. The top of his voice seems to get more powerful and interesting as time goes by, thrillingly so in his heroic cries of ‘Vittoria’ in Act Two, and his ‘Recondita armonia’ and ‘E lucevan’, both sparing of Italianate sobs and beautifully shaped, enhanced the drama rather than hitching a ride on it. There was an announcement before Act Three that Alagna had badly banged his nose during the previous Act, but it wasn’t apparent that his glorious singing was compromised. In the smaller roles, Martyn Hill’s Spoletta was sinisterly to the point, although Jeremy White’s Sacristan rather missed the role’s potential for being unsettling.

Oleg Caetani, in his debut with Royal Opera, distinguished himself in the pit, matched by some fine, full-on and detailed playing. Caetani homed in on the pressure points of Puccini’s score with all the skill of an acupuncturist, and was accommodating without being indulgent to Dyka’s and Alagna’s rubato tendencies.