Skip to content
LnRiLWNvbnRhaW5lcltkYXRhLXRvb2xzZXQtYmxvY2tzLWNvbnRhaW5lcj0iNmIzNDMzNmNmZTc3NWZiNGJlMTVjMmIwMzU3NWM1MjYiXSB7IHBhZGRpbmc6IDI1cHg7Ym94LXNoYWRvdzogNXB4IDVweCAxMHB4IDAgcmdiYSggMCwgMCwgMCwgMC41ICk7Ym9yZGVyOiAycHggZG90dGVkIHJnYmEoIDEwOSwgMTA4LCAxMDgsIDEgKTsgfSAudGItZmllbGRbZGF0YS10b29sc2V0LWJsb2Nrcy1maWVsZD0iODM3Y2ExZjc0MGRjZDdkOTdlMzQzOWMyYjIwMWZmZTMiXSB7IGJhY2tncm91bmQtY29sb3I6IHJnYmEoIDIzOCwgMjM4LCAyMzgsIDEgKTtwYWRkaW5nLXRvcDogMTBweDtwYWRkaW5nLWJvdHRvbTogMTBweDtwYWRkaW5nLWxlZnQ6IDEwcHg7IH0g
LnRiLWNvbnRhaW5lcltkYXRhLXRvb2xzZXQtYmxvY2tzLWNvbnRhaW5lcj0iNmIzNDMzNmNmZTc3NWZiNGJlMTVjMmIwMzU3NWM1MjYiXSB7IHBhZGRpbmc6IDI1cHg7Ym94LXNoYWRvdzogNXB4IDVweCAxMHB4IDAgcmdiYSggMCwgMCwgMCwgMC41ICk7Ym9yZGVyOiAycHggZG90dGVkIHJnYmEoIDEwOSwgMTA4LCAxMDgsIDEgKTsgfSAudGItZmllbGRbZGF0YS10b29sc2V0LWJsb2Nrcy1maWVsZD0iODM3Y2ExZjc0MGRjZDdkOTdlMzQzOWMyYjIwMWZmZTMiXSB7IGJhY2tncm91bmQtY29sb3I6IHJnYmEoIDIzOCwgMjM4LCAyMzgsIDEgKTtwYWRkaW5nLXRvcDogMTBweDtwYWRkaW5nLWJvdHRvbTogMTBweDtwYWRkaW5nLWxlZnQ6IDEwcHg7IH0g
Shostakovich
Lady Macbeth of Mtsensk – Opera in four Acts to a libretto by Alexander Preis & the composer based on the story by Nikolai Leskov [sung in Russian, with English surtitles]
LnRiLWNvbnRhaW5lcltkYXRhLXRvb2xzZXQtYmxvY2tzLWNvbnRhaW5lcj0iNmIzNDMzNmNmZTc3NWZiNGJlMTVjMmIwMzU3NWM1MjYiXSB7IHBhZGRpbmc6IDI1cHg7Ym94LXNoYWRvdzogNXB4IDVweCAxMHB4IDAgcmdiYSggMCwgMCwgMCwgMC41ICk7Ym9yZGVyOiAycHggZG90dGVkIHJnYmEoIDEwOSwgMTA4LCAxMDgsIDEgKTsgfSAudGItZmllbGRbZGF0YS10b29sc2V0LWJsb2Nrcy1maWVsZD0iODM3Y2ExZjc0MGRjZDdkOTdlMzQzOWMyYjIwMWZmZTMiXSB7IGJhY2tncm91bmQtY29sb3I6IHJnYmEoIDIzOCwgMjM4LCAyMzgsIDEgKTtwYWRkaW5nLXRvcDogMTBweDtwYWRkaW5nLWJvdHRvbTogMTBweDtwYWRkaW5nLWxlZnQ6IDEwcHg7IH0g 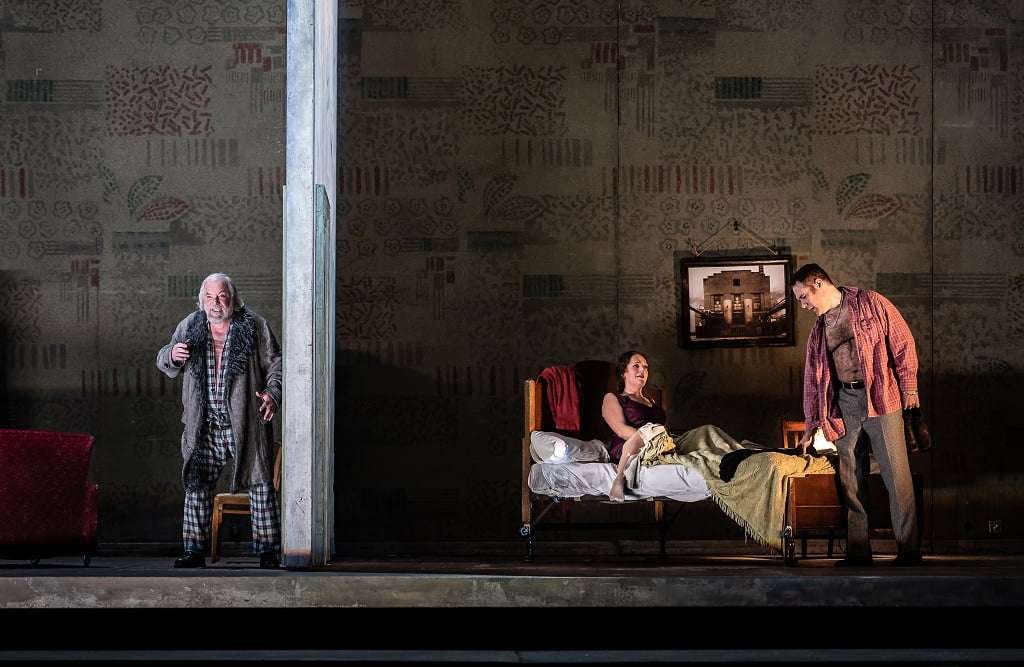 Richard Jones’s 2004 production of Shostakovich’s big, shabby shocker Lady Macbeth of Mtsensk was the first time the 1934 original had been staged by The Royal Opera, and it hasn’t been mounted since its first revival in 2006. Despite the twelve-year gap, two of the 2006 principals – Eva-Maria Westbroek as the fatally bored merchant’s wife Katerina Ismailova and John Tomlinson (marking his fortieth anniversary with the Company) as her singularly repulsive father-in-law – return with overwhelming results.

The familiar signatures of a Richard Jones staging – the regimented movement routines for the chorus, sinister animal masks, and a design look lurching between the 1950s and 1970s while flaunting hideous wallpaper, ugly furniture, terrible pictures and frumpy costumes summing up superfluous provincial aspirations and proprieties in an utterly selfish society that couldn’t care less about Stalin’s Five-Year Plan – have probably never suited an opera better. The bare bones of the story may be Grand Guignol tragedy – the cosmically dissatisfied Katerina, trapped with vapid, possibly impotent husband Zinovy and his vile but rich father Boris, falls into the arms of Sergey, a vain, amoral god’s-gift hunk, murders father-in-law and husband in short order, then is abandoned by Sergey on the road to Siberia and suicide after the crime is discovered – but the opera’s Soviet setting and Shostakovich’s own ambiguous political allegiances give Jones any number of opportunities for the blackest of black humour, a pitiless examination of greed, hypocrisy and worthlessness – this is humanity at its meanest. No wonder Stalin walked out of it in 1936. 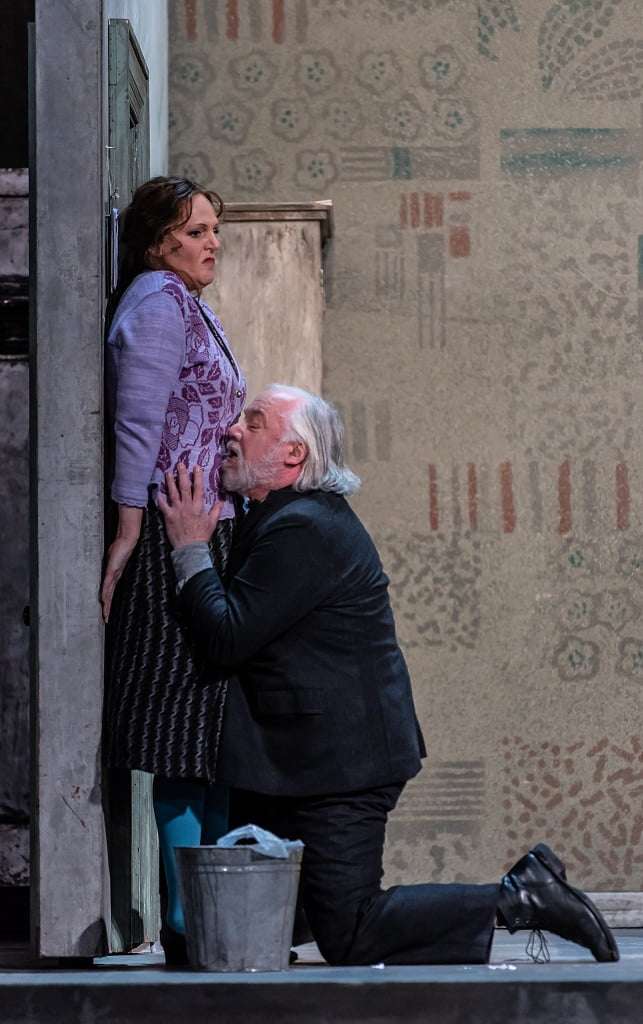 Jones, though, has also fully connected with a composer whose music expresses all this with freakish accuracy, and then miraculously adds a pervasive aura of sympathy for his heroine. Jones’s main point of entry into the opera is sex – this is very ‘adult’ fare – and its motivation. When rippling Sergey knocks on the door of Katerina’s bedroom – her husband is away repairing a dam on the vast Ismailov estate – to “borrow a book”, her response to him is both as victim and dominatrix. Put more blatantly, when the housekeeper Aksinya is passed round the estate workers, it is very clearly consensual, as well as being disgustingly violent.

This revival is directed by Elaine Kidd (Jones’s new Parsifal opens in Paris later this month) with a precision and bravura that vividly recreates the production’s many big moments, notably the transformation of Katerina’s boudoir after she’s dispatched Boris with mushrooms laced with rat poison, the chilling, meticulous choreography of her wedding scene to Sergey, and the awful sight of Katerina, Sergey and the prisoners being unloaded from container trucks en route to a Siberian gulag. With a first half at nearly two hours, it’s a long evening, but from Katerina’s soliloquy in the opening scene, which makes clear the breadth of Shostakovich’s ambitions for his heroine, to the degradation and grandeur of the final Act, the opera never loses its grip.

Musically, this is The Royal Opera on top form. As Katerina, Eva-Maria Westbroek is a triumph. She doesn’t spare us Katerina’s complications and contradictions, the vulnerability side by side with the monstrousness – her and Sergey’s murder of poor Zinovy has you laughing out loud then recoiling in horror – and, at the end, her nobility. This is a performance leaving you in no doubt that this is one of opera’s great female leads. Westbroek’s voice has a vital rawness, warmth and stamina in abundance and her singing communicates an ever-present sense of danger. 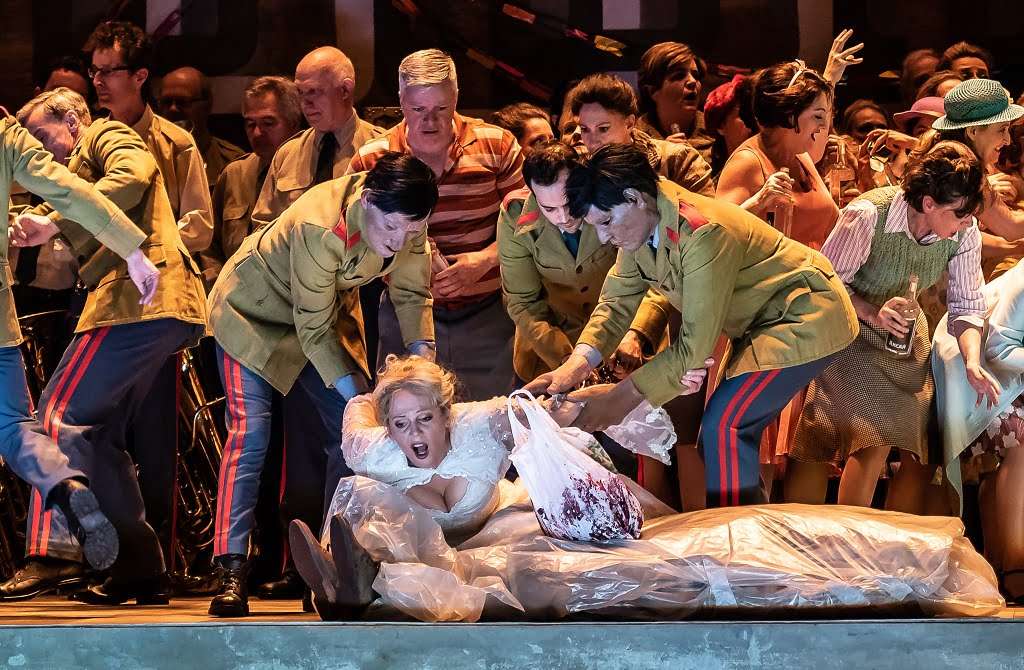 John Tomlinson’s voice may have lost some its bloom, but his singing and agile acting give us an unforgettably repellent Boris, and, after his death, his ghostly reappearances are bleak, high comedy. Brandon Jovanovich is superbly cast as brawny Sergey, and he sings the high-tessitura music heroically. John Daszak returns as hopeless Zinovy, a smaller but vital role that he nails convincingly. There are strong cameos from Rosie Aldridge as Aksinya, the Ismailov housekeeper with needs; from Peter Bronder as the Shabby Peasant who gleefully shops Katerina to the police; and from Wojteck Gierlach as a slippery, corrupt Priest. Mikhail Svetlov turns up the corruption hugely as the Police Inspector, and Aigul Akhetshina is an impressively feral, opportunistic Sonyetka, who bags Sergey briefly in Act Four before being drowned by Katerina.

The more Antonio Pappano accommodated the music’s lyricism, the more painful it became, and the ROH Orchestra was completely tuned-in to the score’s double-edged beauty and force, with powerful results in the five Interludes. The fourteen-strong brass band, deployed between stage and biliously pink-lit stage-side boxes blazed magnificently.