Strauss
Elektra – Opera in one act to a libretto by Hugo von Hofmannsthal, adapted from his play, after Sophocles [sung in German with English surtitles] 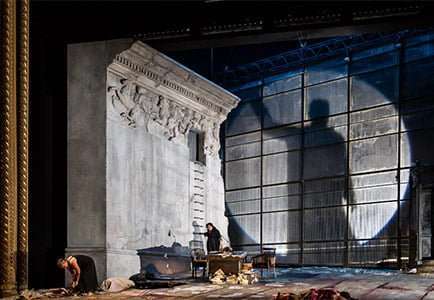 Consciously or otherwise, at the dawn of Germany’s most troubled century the middle-aged Richard Strauss composed two operas whose respective moods portend the death-throes of a civilisation (and I’m inclined to think of Der Rosenkavalier as a third). The prescient significance of both Salome (Ancient Rome) and Elektra (Ancient Greece) grew unmistakably as destructive forces rose, writhed and died not once but twice during what remained of the composer’s life. In Charles Edwards’s coruscating Royal Opera production of the latter work, now revived for the second time, the connection could hardly be more explicit.

Edwards sets soulless pre-war German architecture alongside crumbing Greek ruins. The floor is awash with stale blood from the slain Agamemnon (the first three syllables of whose name are screamed by the orchestra in the opening chords – unfinished as though in death). Five maids try vainly to conceal the evidence by screwing grubby lengths of hardboard over it, watched by an Elektra who never leaves the stage. A pervasive stench of ghostliness hangs over the proceedings along with a sense that the Elektra we see is no longer alive but a manifestation of a spirit that is doomed to revisit her remembered terrors night after night. She languishes, both haunter and haunted, within a spectral Expressionistic world. 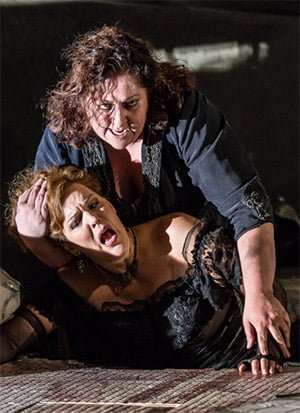 This fierce vision places extraordinary demands on a singer who is already dealing with one of the most taxing dramatic soprano roles in the repertory; but at the first-night performance Christine Goerke was full-on and fearless, if not wholly tireless. From her Valkyrie-inflected early scena to Elektra’s final dance of vengeance the American embraced all the madness and magnificence of Strauss’s score, only faltering during the reunion scene with her brother Orest (the splendid Iain Paterson) when incipient fatigue compromised her hushed tone on a sustained high A flat.

In an opera dominated by the soprano voice – no male singer is heard until the hour mark – Michaela Schuster was Goerke’s equal as a raddled, diseased Klytämnestra (Elektra’s mother; Agamemnon’s wife and nemesis), her strongly-characterised delivery as poisonous as her pustulating boils. The revelation, though, was the Chrysothemis of Adrianne Pieczonka, a role she also sang at this year’s Aix Festival. The Canadian soprano grasped her opportunity to recalibrate the opera’s emotional world closer to something we might recognise as normality and did so with a lyrical vulnerability and even tenderness – glimpses of dignity and sanity that set the horror elsewhere into even starker relief.

Minor parts were all well taken: they included a brief appearance by John Daszak as Ägisth, Klytämnestra’s consort, a cough-and-spit for Jeremy White, the Royal Opera’s go-to codger these days, and a more substantial role for the excellent Jennifer Check as the Fifth Maid, doomed to be beaten and then to crawl the stage in a protracted search for death. Andris Nelsons brought out all the savagery of the score without ever descending into unmusical violence. With a massive orchestra at his disposal – the percussion section spilled over into several stalls boxes – he articulated Strauss’s reflective passages as vividly as he did the big moments such as the explosion of noise when Elektra recognises her brother for the first time (a cacophonous flow that seems to depict a mind so battered and bruised it can no longer cope with unexpected shocks, even welcome ones).

The occasional misjudgement aside, Edwards’s self-designed production, now ten years old, represents Strauss and Hofmannsthal exceptionally well. The lighting, also his own work, keeps a relentless white beam on Elektra to show there is no escape for her; but the follow-spot thus entailed can be a distraction. Of greater concern is a revolving door that provides unwarranted mirth at an unfortunate moment. However, these are small flaws in a majestic production that is as taut and terror-infused as the score it serves.