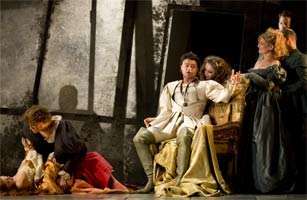 David McVicar’s blood-and-thunder production of Rigoletto, new in 2001, returns for its sixth revival. The last time I saw it, the opening orgy seemed a bit perfunctory, full-frontal nudity notwithstanding. This time, it’s even creakier, the priapic lustiness even more smirk- rather than revulsion-inducing, and that creakiness extended into some lumbering scene changes. Once in place, though, the revolving one-piece set complements the squalor and ugliness of the story and of most of the characters well enough, the battered corrugated iron and chain fencing leaving it to the costumes to etch in a hint of renaissance Mantua. Personally, I think that a bit of stealth and suggestion does sexual depravity more favours than wham-bam, red-hot thrusting, especially when the screams and yelps of unbridled congress almost drown out the band.

The selling point of this revival is the two male leads. Vittorio Grigolo, Italy’s “little Pavarotti” and a hot opera divo property, sang the Duke, in his role debut for the Royal Opera. He’s said that he wants to get the lighter French tenor parts under his belt – which he has done recently in the Covent Garden Faust – but here he was blasting his way into macho, mid-period Verdi; indeed, it would have come as no surprise if he’d made his first entrance with a blinding “Essultate!” worthy of Otello. Give him time. His voice is very powerful, and replete with the full Italian armoury of sobs, portamento, look-at-me rubato and phrase teasing. He easily fulfils the role’s “young and handsome” brief, he brings a lithe finesse to the quieter music, and was impressively agile in ’La donna e mobile’. You’d need a lot of convincing, though, that this clean-limbed young man is a rapine sex-fiend, however much he wind-milled around the stage – not my idea of a predator unleashed. 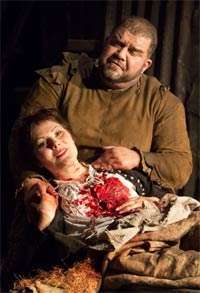 This generalised view of the Duke became all the more noticeable set against the other male lead, the very specific, detailed Rigoletto of Dimitri Platanias. Other Rigolettos have played up McVicar’s presentation of him as a black-leather-carapaced dung-beetle, scuttling creepily around the stage with the help of his two walking poles. Platanias was all that, but he didn’t over-emphasise it, relying more on the quality and colour of his considerable baritone to establish the role. He was mesmerising in his wheedling search for Gilda in Act Two, but in the end he was just a bit too civilised for a deformed clown hell-bent on la vendetta.

Ekaterina Siurina, who has sung Gilda twice before in this production, didn’t get much of a chance to create a convincing relationship with her father, but her singing, particularly in her Act Two love-scene, was very fine, with a distinguished ’Caro nome’, and her knocking on the door of her doom in Act Three is still one of this staging’s best things. Matthew Rose’s Sparafucile needed more pitiless blackness; there was a bleakly duplicitous Giovanna from Elizabeth Sikora, Christine Rice filled out the role of Maddalena with great conviction, and Gianfranco Montresor and Zhengzhong Zhou made their marks as Monterone and Marullo.

John Eliot Gardiner, conducting Rigoletto for the first time, might reasonably have been dismayed by cracking trumpets in the ‘Prelude’, but he went on to deliver some very crisp, impressive ensemble work, with some lovely obbligato playing. His generally quick tempos were light on idiomatic Verdian doom, although the drama itself lacked nothing in momentum, even if there were times when an Italian tenor of Grigolo’s heft might have wanted more of a look-in. Gardiner’s no-nonsense approach was summed up by a tempo for ’La donna è mobile’ that missed the aria’s potential for cynical bite and weight.