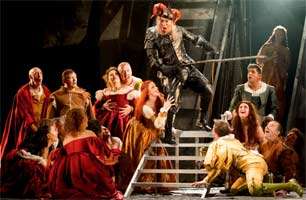 Dmitri Hvorostovsky’s first performances as the world’s least funny jester in this staging, in 2005, radiated a gripping, very Russian ferocity, like a dark star, with the power to bend Verdi into Mussorgsky. Five years on, and he is even more impressive, his sleek, Slavic good-looks totally erased by his crab-like costume, and his sinister scuttling around the stage even more unpleasant. It’s a measure of his presence that he seemed almost too over-the-top in the first act, but he had certainly started as he meant to go on, and from the second scene onwards he was magnificent, rising effortlessly to one melodramatic peak after another, and subjecting his voice to extremes of expressiveness. 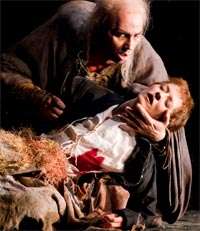 The intensity of Hvorostovsky’s Rigoletto made complete sense in his connection with Gilda. She was radiantly sung by the Italian soprano Patrizia Ciofi, with a wonderfully pure and light tone. She’s the most convincing Gilda I’ve heard in a long time; she delivered a thrillingly intimate, technically impressive ’Caro nome’ that was both musically and dramatically very satisfying, and her crossing the threshold to her murder is one this staging’s great moments. This particular father-daughter combination is powerful stuff.

Set against a jester from Siberia was the Duke, sung by the Korean tenor Wookyung Kim. His voice is elegant, bright and flexible, but he wasn’t convincing as a vessel of unbridled licentiousness. ‘La donna è mobile’ lacked the layers if cynicism and emptiness that are there for the taking, and as a lover he seemed almost coquettish. Among the other principals, Raymond Aceto was a superbly cold-blooded Sparafucile, with a decidedly unbrotherly interest in his sister Maddalena, a robust portrayal from Daniela Innamorati; and there was a splenetically vengeful Monterone from Michael Druiett. The chorus was on superb form.

Conducting, Dan Ettinger (making his Royal Opera debut) went for the production’s blackness in a big way, opting for explosive fortissimos and high-definition contrasts. His approach suited this uncompromising production well, even if Verdi’s orchestral palette does admit to a few more colours. Ettinger certainly has the measure of middle-period Verdi’s concision and melodrama.

This latest revival, directed by Leah Hausman, made the staging much tighter than I remember it, and while Michael Vale’s monolithic set sort of takes its cue from renaissance Mantua, it succinctly sums up urban dilapidation of any age. This is the Royal Opera firing on all cylinders.