The Orchestra of the Royal Opera House
Renato Palumbo 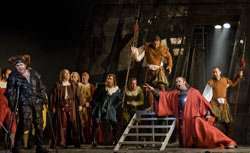 On this showing David McVicar’s 2001 production of “Rigoletto” is not wearing as well as might have been expected. One might not have noticed had not some deficiencies this time round combined to give the impression that this was a decidedly routine revival. Sadly, the elements that made it interesting, particularly the touching Gilda of Patrizia Ciofi, were not enough to rescue a rather dispiriting evening. McVicar’s production has its moments, and Michael Vale’s austere and atmospheric single-unit set does provide a suitable background for this dark tale.

The first appearance of the singers is at the Duke of Mantua’s court where all sense of decorum and propriety have long since disappeared and any form of depravity goes. The burden of this falls on the chorus and actors. When the production was new this had a focus and a danger about it – but it now looks rather tawdry and the members of the chorus are not throwing themsleves into it as wholeheartedly as they once did. There now seems to be compensation in a lot of noise, rushing around and overplaying that becomes repetitive and wearing as the evening progresses. The chorus sings lustily enough, and the off-stage murmurs during the storm of Act Three certainly make an impression.

Renato Palumbo’s conducting was a bit of a disappointment and can only be described as ‘obvious’. Yes, this is an opera that bridges early- and middle-period Verdi, but here the music was overdriven and subtlety and finesse was not much in evidence. Sometimes he made you take notice of something new – his pacing of the moment at the end of ‘Pari siamo!’ when Rigoletto enters his house and is greeted by Gilda was faster than I’ve ever heard it – but perfectly matched Ciofi’s entrance. More often though the tempos seemed overly variable, and no pulse once set was retained for very long. Some of the pulling around was so extreme one wondered how the singers managed to keep together with the orchestra. The orchestra was on big brassy form, but the musicians were not fired up. 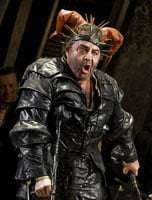 It is sad to report that in the title role the distinguished baritone Franz Grundheber was not on his customary excellent form. His singing was rather rough and often ill-tuned, and he too often resorted to a sort of barked parlando in compensation. Thus his sense of line, rather than lyrical and smooth where required, was rather choppy. He also seemed only to have two volumes – very loud or very soft and there was little gradation in between. However, curiously, the more dramatic moments such as ‘Cortigiani, vil razza dannatta’ and the ‘Si, Vendetta’ outbusts of Act Two were not as powerful as perhaps might have been expected and seemed to be approached with a degree of caution. The interpretation suffered as a result due to a lack of individuality, a rather prosaic quality, and little evidence of emotional involvement between this Rigoletto and his daughter. 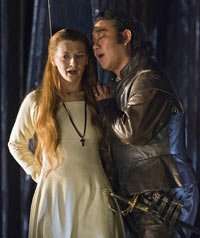 There were some compensations elsewhere. The South Korean tenor, Woo Kyung Kim, was making his debut in the house as the Duke. His is a light and bright voice, perhaps a shade too light for the role, but one that was used with musicality if without much variation in tone and expression. The more introspective moments were sung with a similar characterisation to the more ebullient and extrovert moments. He does not appear to possess much stage expereince as his acting consitituted a succession of stock postures and poses, and a tendency to stride the stage sweeping his flowing robes and cloaks for effect. His is a nice voice – but he should be being nurtured in a smaller house than being launched in a major house such as Covent Garden.

As indicated earlier Patrizia Ciofi was the true focus of the evening, and her individuality of expression, her acting evincing true pathos, and her expressive vocalisation of the part all made her Gilda a fully fleshed-out character. Hers is not soubrette or overly bright coloratura voice but one with much more body to the tone and she really uses words to great effect in passages like ‘Tutte le feste’. It really works.

In the smaller roles Raymond Aceto’s imposing bass made an impression as the hired assassin Sparafucile and Elizabeth Sikora made her presence felt as the duplicitous Giovanna. Darren Jeffery lacks the penetrative voice that an outstanding Monterone needs, but has impact nonetheless. Jana Sýkorová did as much as she could with the characterisation of Maddalena required by this production.

Not one of the happiest evenings – one hopes the ROH’s strong Verdian traditions are not dissipating.