Verdi
Falstaff – Commedia lirica in three Acts to a libretto by Arrigo Boito after William Shakespeare’s plays The Merry Wives of Windsor and Henry IV Parts I & II [sung in Italian, with English surtitles] 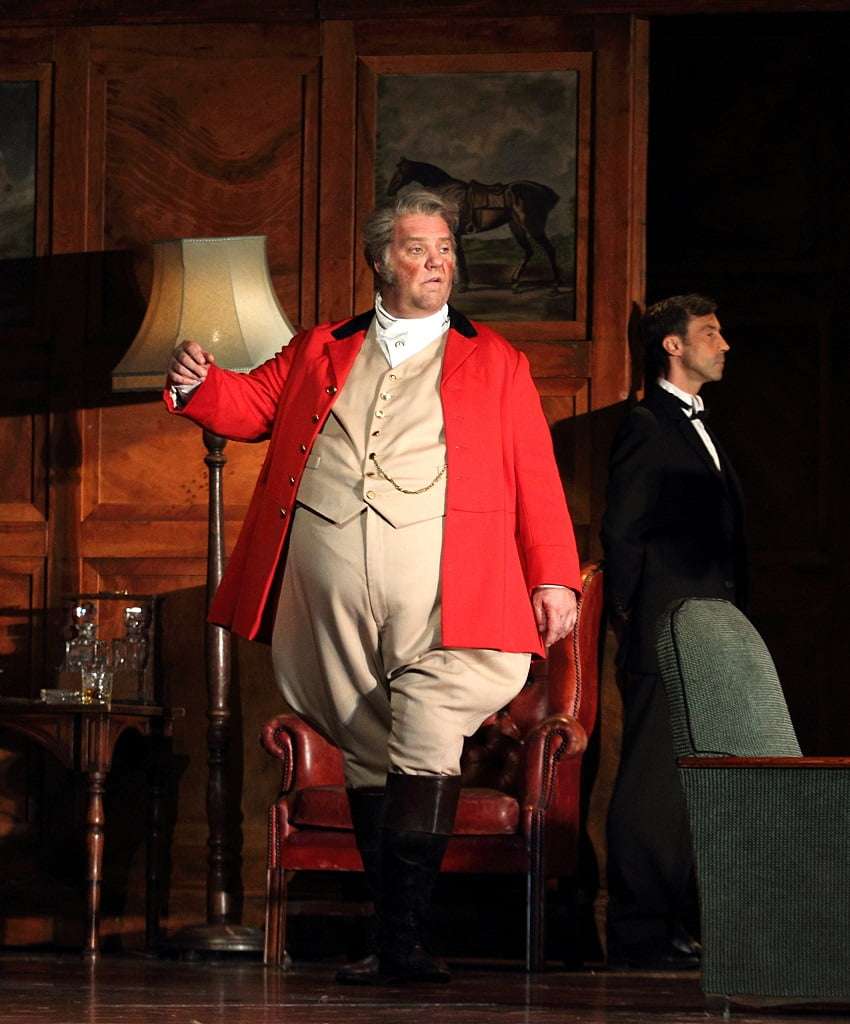 The second of this year’s revived Shakespeare-in-opera offerings from Robert Carsen (after English National Opera’s A Midsummer Night’s Dream in the Spring), is the second revival of The Royal Opera’s co-production of Verdi’s valedictory Falstaff, first seen in 2012. Returning to the cast from that original outing are Ana María Martínez and Marie-Nicole Lemieux, as well as Carlo Bosi. The two principal male leads have both sung their parts at this house, but in the previous (and more radical) Graham Vick production, from 1999. As it happened they had not shared the stage together in this opera in London before, and appear now as newly knighted (Simon Keenlyside was made a Sir just last month, following Bryn Terfel’s gong in 2017).

With such a strong cast, well-versed in the opera, it boded well as a lovely summer entertainment and so it proved. Carsen’s staging – updating the action to the 1950s, under the assumption that all Windsor interiors are massive, and (largely) wood-panelled – is finely detailed, and comes from the time when Covent Garden must have decreed that live quadrupeds were required for every production (remember Zambello’s donkey in Carmen?). Here a hungry horse (sadly, not credited), chomping on hay, nearly upstages Falstaff’s post-Thames-dip monologue at the start of Act Three, although Terfel, emerging rotund and bedraggled from a pile of straw, establishes a rapport with his equine friend to shift the focus back. Lemieux’s wonderfully busy-body Mistress Quickly, all floral bedecked, soon turns his mind back to the seemingly innocent Alice and the possibility of conquest that leads to the final scene in Windsor Great Park, everyone wearing antlers. 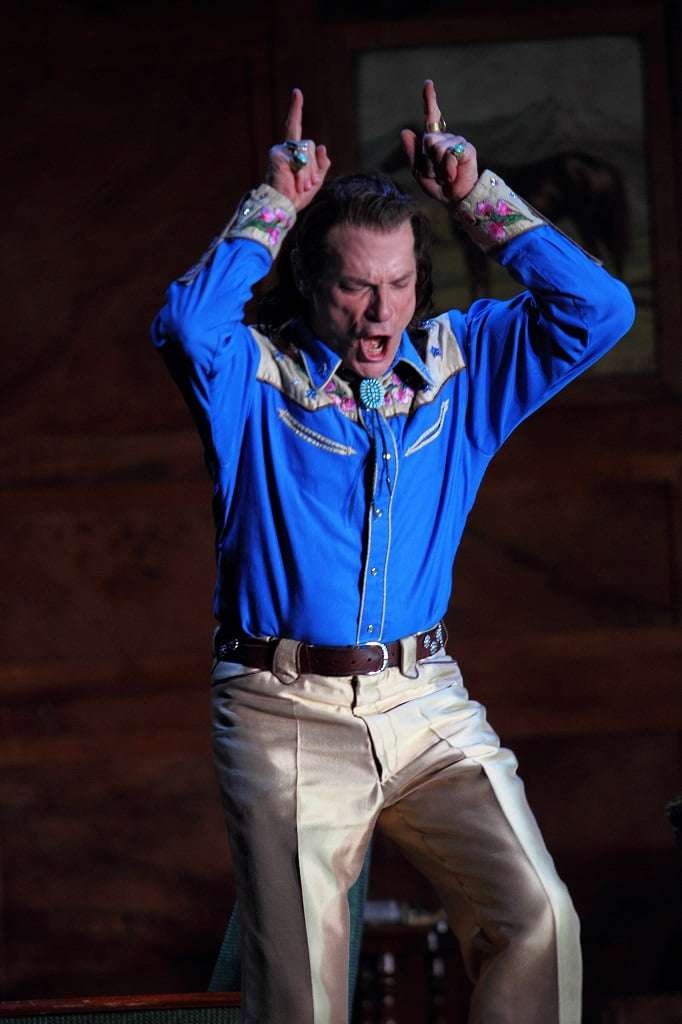 In the pit, Nicola Luisotti takes a measured view of the score, adding over fifteen minutes to Terfel’s audio recording (with Abbado, from 2001). There’s a profit and loss equation in this. On the one side, there is greater clarity in the two big ensembles, climaxing in the nonet at the end of Act One, and the final, glorious (and here stately) ‘Tutto nel mondo’, where Carsen visually aid the fugue by each entry matched by its character stepping down from the long table (that has materialised in Windsor Great Park). Gone is the vast sheet under which the cast had grappled in Vick’s production. On the other hand, there’s a lack of cumulative fizz, genteel rather than cathartic.

Still, there is plenty to relish. Terfel is Falstaff from his eyebrows to his toes, a glint ever in his eye, even if he makes him perhaps far too likeable. Keenlyside has more fun, able to play grey-suited but green-hearted Ford – so caught up in his jealous rage over his wife’s supposed infidelity that he doesn’t notice her plotting to allow their daughter to marry Fenton (when Ford favours Dr Caius) – and the gold-lamé-sporting Brook who pays Falstaff to have an affair with Alice. Ford is just as ridiculed as Falstaff, a fact that Falstaff recognises in the final chorus – the whole world is a joke.

Carsen is not the first director to update the tale to the 1950s. Richard Jones’s 2009 Glyndebourne production slightly pre-dates his version to, specifically, post-war Britain in 1946, while those with a longer memory will hark back to Bill Alexander’s 1985 production for the Royal Shakespeare Company. Whether they had kitchens as big as Carsen imagines in Windsor in the 1950s and why Falstaff’s bedroom should have any, let alone so many, tables set for lunch, I’m not sure. 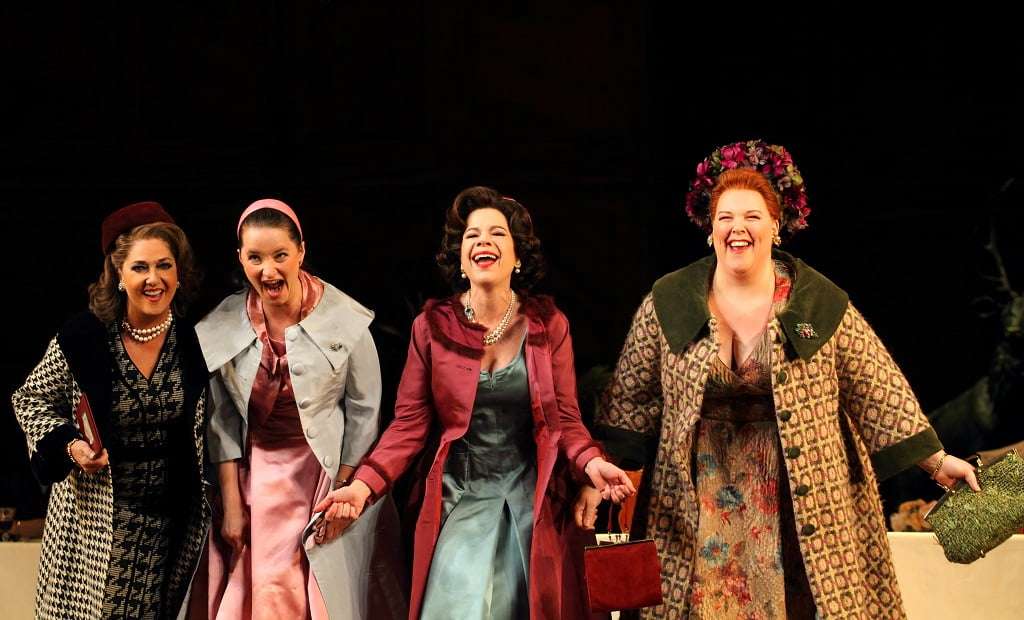 Ultimately there is an infectious bonhomie about Carsen’s staging. They certainly seem to be enjoying themselves, and that effortlessly envelops the audience in goodwill. Martínez is commanding, with both mischievous Lemieux and co-conspirator Marie McLaughlin’s Meg Page rising to the occasion. Time seems to stop (a clever ruse by Carsen, revived by Daniel Dooner, has all other action come to a halt and the lighting change) when ardent lovers, Anna Prohaska’s Nannetta and Frédéric Antoun’s Fenton come to the fore, willing the audience to be on their side. Bosi’s Dr Caius, Michael Colvin’s Bardolph and Craig Colclough’s Pistol prove to be as nimbly physical as well as vocal, though I’m not sure why the latter two are in kilts at the end (unless Carsen had mistaken Balmoral for Windsor in a moment of madness).

I noted, as Terfel exited while Dr Caius finds himself married to Pistol at the end and Ford has to accept that Fenton has married his daughter Nannetta, that when he returned in his red-jacketed hunt finery his flies were undone. I assume, given that for the curtain call they were done up, this was not a directorial decision. But it could have been…