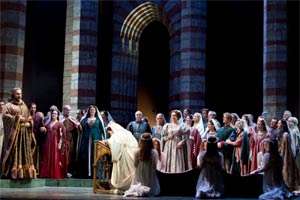 In one of his non-anniversary years, Gounod is doing rather well by London – a city, incidentally, where the composer settled for a few years in the 1870s, even trying to establish a music school with his mistress – with the atomic-age “Faust” from ENO and this 16-year-old production of “Roméo et Juliette”, back for only its second revival (the first was in 2000, with Alagna and Gheorghiu as the star-crossed pair).

The Victorians went for Gounod’s lofty sentimentality in a big way, so his card was marked as far as the hard-and-fast 20th-century was concerned. Yet “Faust” and “Roméo et Juliette” have both held their ground, and while “Faust” may have more than its fair share of tunes, “Roméo et Juliette” is the better piece.

Carl Tommasi’s lumbering cod-Italia-medieval set was never going to win any prizes, but in conjunction with the costumes, the staging does capture the spirit of that glossy, mawkish view of Shakespeare as filtered through Victorian sensibilities, and it never gets in the way of the action, or indeed of the large chorus, never far away to remind you that this is very grand opera. 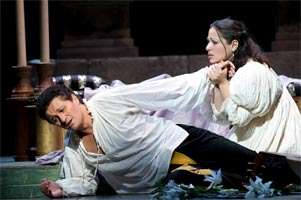 The first encounter with Nino Machaidze’s Juliette did give rise to some doubts, with some eminently slappable, unconvincing girlish glee and some worrying intonation in her show-stopping-before-the-show-has-started aria ’Je veux vivre’, a close French relation to Violetta’s ’Sempre libera’ from “La traviata”. Her singing here certainly had brilliance but not much shade or colour. But this teenager was a fast, indeed overnight, developer, because by Act Two she had settled into something much warmer and assured, with enough hints of passion to come to keep Roméo on the boil, and she went on growing into the role. I could even forgive the intrusion of a not entirely assimilated Gheorghiu-style flutter to her voice; but in terms of stamina, control and phrasing, Machaidze was impressive.

She was powerfully matched by the Roméo of Piotr Beczala, who got off to a flying start with a magnificent ’Lève toi, soleil’ and he was thrilling in the Act Three fight scene. There were very slight signs of wear in the last two acts, but they didn’t undermine his heroic, ardently Gallic portrayal – and unlike his Juliette, his French diction is good.

It’s the love scenes that carry the story, whether it’s the play, a film, a musical, an opera or a ballet, and Machaidze and Beczala did not fail in this respect, achieving real Shakespearean weight in the parting scene and above all in the final act. There was chemistry at work, which could be quite devastating by the end of the run.

It was good to see and hear Alfie Boe being stretched and butch in tights as Tybalt, and a convincingly threatening makeweight to Stéphane Degout’s virile, stroppy Mercutio. It’s always a pleasure to hear Diana Montague, although she doesn’t get much to do as the Nurse. Darren Jeffery and Vitalij Kowaljow had considerable success with the two-dimensional parts of Capulet and Friar Lawrence, and Ketevan Kemoklidze made a strong impression as Romeo’s page, with an attractively insouciant ‘Que fais tu, blanche tourterelle’. Daniel Oren has the measure of the score, from its French prettiness, though suave lyricism to heightened passion.