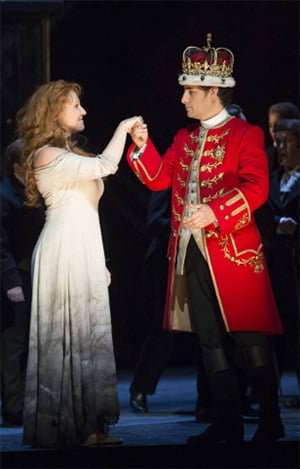 After the first half-hour or so of Rossini’s La donna del lago I was thinking that bel canto doesn’t get better than this, with both Joyce DiDonato and Juan Diego Flórez not only firing on all cylinders but firing off each other. Yet, in an opera that requires four virtuoso singers, the quality of the performing remained at this dazzlingly assured level with the appearances of the contralto Daniela Barcellona and another tenor, Michael Spyres.

I’d only seen La donna del lago once before, in a vigorously Scots-bashing production at Garsington in 2007 that tried to turn Rossini’s Walter Scott melodrama into a farce – with woeful results. It’s strange that this wonderful opera, even in these days of accomplished bel canto singers, is still lingering on the mainstream repertoire fringe – it seems to have everything that audiences want from opera of this type – strong arias, full-on choruses, a simple but psychologically interesting dilemma for the lead roles, good tunes and thrilling finales to the two Acts. 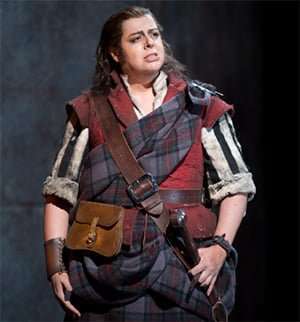 In its Neapolitan heyday (La donna del lago belongs to the same period as other opere serie written by Rossini in his Naples period, such as Otello and Semiramide), it was hugely popular, and the fact that it took a mere nine years from the publication of Scott’s epic, historic/mythic poem The Lady of the Lake (in 1810) to be transformed into opera speaks volumes of the pan-European passion for all things Scottish, above all the great elemental wilderness glowering romantically on the northern edge of Europe, with elemental inhabitants to match.

I greatly admire the way in which John Fulljames’s production neatly honours the spirit of all this Caledonian inspiration, deferring to its historical basis (the sixteenth-century Stuart King James V dealing with rebelling Highland clans) but at one remove. As a framing device – reminiscent of Glyndebourne’s staging of Purcell’s The Fairy Queen – Fulljames has set it at the time of its composition (1819). It opens with a group of worthy antiquarians poring over the 300-year-old exhibits in a Scottish museum – Including the Stuart regalia and the life-like figure of Helen (Elena) of the Douglas clan (the lady of the lake) frozen in time in a display cabinet. Then, rather like the daft Ben Stiller movie, Night at the Museum, the exhibits come to life and take over the story – except that Fulljames keeps the two periods open simultaneously by having the two smaller roles of Serano and Albina assume the characters of Walter Scott and Rossini, who guide us into their creation. This time-bending could be awkward and artificial, but is done with a very light touch; even when the two singers were participating, their contributions spoke to both ends of the time-band. 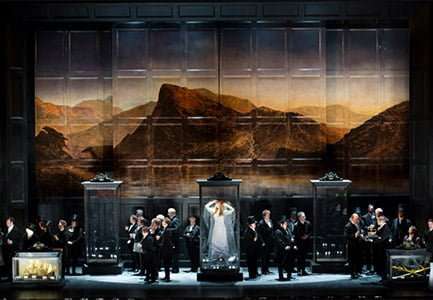 I can’t think of the distancing, mythologising effect of time on history being depicted so deftly on the stage – and just as cleverly it let the main love-entanglement strand float into view. It’s one of those triangles with quadrilateral aspirations – King James disguised as Uberto falls in love with Elena who loves Malcom (no ‘l’) but is ordered by her father Duglas (no ‘o’) to marry hairy Highland chieftain Rodrigo. Elena has no idea of the strength of Uberto’s passion, and when all is revealed after Rodrigo and his rebellion have conveniently been dispatched to the here-after, the King, as in Mozart’s La clemenza di Tito, forgives all – and you know he’s King because he’s wearing the crown of Scotland (from the museum’s display cabinet) and a cloak of Stuart tartan. The early-romantic view of Scotland is clinched by a backdrop of a hugely enlarged image of a Scottish-Sublime landscape painting – all light, loch, mountain and glen – of a type to be so swiftly bowdlerised by the Victorians.

The singing displayed the sort of transcendent virtuosity that makes your eyes prick. It’s so exciting. Joyce DiDonato defied vocal gravity with her easy coloratura, as detailed as it was decorative, with a directness and fluency that made her music soar. Like Juan Diego Flórez, DiDonato completely draws you into the viscerally expressive power of this spectacular writing. Flórez was on equally top form in his magnificently sung ‘O fiamma suave’ in Act two, when he declares his true feelings for Elena, and he nailed his top Bs and Cs with thrilling accuracy and power. Both singers were terrific in the opening section of Act One, but capped even that in their stupendous duet in Act Two – a love-song from him to her, a rejection from her to him. As Elena’s real love, Malcom, Daniela Barcellona revealed that it’s not just the high female voice that makes its bel canto mark. Her rich contralto had awesome agility and solid definition in her lower register, and she was hugely sympathetic as a lover beset by rivals. Michael Spyres, as Rodrigo, was half-baritone, half high lyric tenor, all consummate, action hero. The role goes both very low and very high, and Spyres was thrillingly on top of both ends of his phenomenal range, and did so with thrilling presence and technical command – bliss it was to be in such tenor heaven, especially when Uberto and Rodrigo were squaring up to each other over Elena. Simón Orfila (Duglas) showed off his dark baritone in strong contrast to Spyres, with strong tone and sense of line, and Robin Leggate and Justina Gringyte distinguished themselves as Serrano (Walter Scott) and Albina (Rossini).

The Royal Opera Chorus was raw and virile as rebellious highlanders; the rape scenes were rather overplayed. Michele Mariotti conducted the small ROH Orchestra with a remarkably fluid bounce and brio; there were fine contributions from poetic harps and hunting horns, and also the stage-sharing bands. The way Mariotti allowed Rossini’s Scottish effects to melt away into Neapolitan sunshine was very attractive. This was a very special evening.