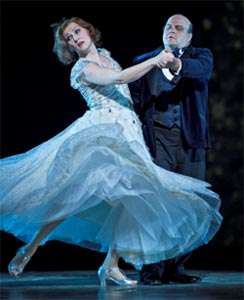 David McVicar’s production of Richard Strauss’s “Salome”, first presented by Royal Opera in 2008, is highly successful in recreating the element of shock that audiences must have felt at the opera’s premiere in 1905, although the relocation of the story’s historical setting to a more modern era inevitably results in some anachronisms and illogical aspects. Instead of the terrace outside King Herod’s palace, the setting is a tiled basement with water pipes, dim incandescent bulbs and a pig’s carcass hanging from a hook. A staircase on the right curves up to a partially visible floor where Herod’s guests can be seen in evening attire at a dinner table. The basement area is populated by Herod’s guards and domestic staff as well as by two women in various states of undress, their presence suggesting decadence and perhaps even abuse.

The basement setting remains in place until Salome’s ‘Dance of the Seven Veils’, when it temporarily makes way for a series of video projections, including a chair with a doll, a dress being unzipped and an exploding light bulb, while a series of sliding doorframes suggest movement between rooms. During the sequence, Salome exchanges her silk cocktail gown for another dress and then waltzes with Herod, finishing the sequence by splashing water backwards over herself from a basin.

As well as this sequence, the production has other eccentricities, including Naaman being naked (fortunately with his back to the audience) when he descends into the cistern and returns with Jokanaan’s severed head. The passages with the Jews, attired in kippahs and prayer-shawls, are played without caricature or humour, although their presence makes little sense in the context of the modernistic staging. Nevertheless, the production works as a dramatic entity thanks to the strength of Strauss’s original libretto as well as the thoughtfully choreographed movement of the cast and the interactions between them. Typical of the attention to detail is the fact that Jokanaan’s head oozes blood onto Salome’s dress throughout the final scene, emphasising depravity. It’s a pity that the opera ends with Salome’s death being caused by a bear-hug administered by Naaman, an unconvincing change to the stage directions. 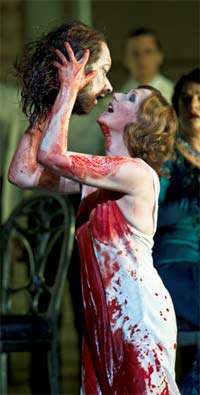 Angela Denoke’s slim build and lithe movements give her portrayal of Salome a youthful and seductive character, and her acting is convincing in conveying both Salome’s initial coquettish manipulation of Narraboth as well as her obsessive lusting after Jokanaan’s severed head. She also has the vocal power to be heard above the orchestra, although not quite the silver purity of tone or expression of ecstatic emotion that the greatest sopranos bring to the role.

Johan Reuter, a previous Orest at Covent Garden, here makes his debut as Jokanaan. His initial offstage contribution sounds unduly remote, but sings with impressive warmth and power once on the stage. He successfully portrays Jokanaan as an angry, tragic character at odds with the decadence around him, appalled by the advances of Salome.

Gerhard Siegel has previously portrayed Herod at a number of opera houses and is impressive vocally, although he is less convincing in his depiction of the tetrarch as an excitable, spineless character seemingly at the mercy of events. By contrast, Irina Mishura brings a dignity and restraint to Herodias, making her character seem more sympathetic than usual. The Jews, Nazarenes and other supporting roles are convincingly sung.

The orchestra is the other major protagonist in “Salome” and this was the weakest element of the performance. Hartmut Haenchen supported the singers well and encouraged some beautiful playing, but there were also a lack of precision and an inconsistent application of dynamics. More seriously, some impressive climaxes did not make up for a general lack of lyricism and a failure to project the surging, arresting ardour that should make the closing scene so moving.