Verdi
Simon Boccanegra – opera in a Prologue and three acts to a libretto by Francesco Maria Piave after the play by Antonio García Gutiérrez [1881 Version, libretto revised by Arrigo Boito; sung in Italian with English surtitles] 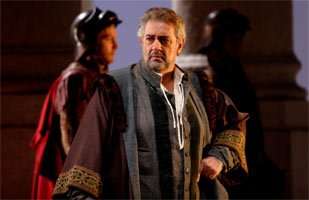 Plácido Domingo may no longer have the magisterial tenor range of his glory years, but he still has a commanding presence that is more than equal to most others on the operatic stage today. With its dramatic scope and rich vein of pathos, the title role of Verdi’s “Simon Boccanegra” could have been tailor-made for Domingo at this point in his career. It is true that, restricted solely to a baritone range, his voice sparkled less frequently than it once did – and there were a few sad moments when the climax of a high phrase seemed to leave his voice yearning to go still higher; but, like Samson shorn of his hair, he had to check himself with a forlorn “not any more”. But, despite this, Domingo’s peerless stage-craft and depth of characterisation produced a riveting performance. And the voice still shone: if this was the first the world had seen of Domingo, we would be hailing a phenomenal baritone talent – remarkable for a singer in his seventieth year.

Boccanegra is undoubtedly the lead role, but this is an ensemble opera and the rest of the casting is vital. As Jacopo Fiesco, who starts out as Boccanegra’s mortal enemy and ends as his friend (discovering their true relationships with Amelia), fruity-voiced Ferruccio Furlanetto was superb, his cavernous bass tones filling the theatre magnificently. Jonathan Summers was less vocally impressive as the traitorous Paolo Albiani, but he oozed malevolence and projected well.

It must take guts for another tenor to take to the stage in front of a packed audience of Domingo fans, but Joseph Calleja appeared unfazed by this daunting challenge, giving an assured account of Adorno’s big Act Two aria. With her long, blond tresses, and delicately refined demeanour, soprano Marina Poplavskaya perfectly embodied the role of Boccanegra’s daughter, Amelia. Her powerful voice could always be relied on in the ensemble numbers, but her tendency towards plummy tones did not well-serve her two arias, both slow and intimate. 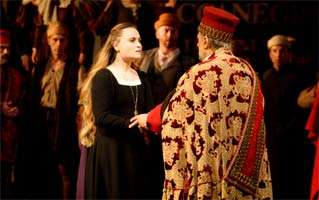 Although Domingo was the star attraction, the real heroes of the evening were Antonio Pappano and the Royal Opera House Orchestra. Verdi is meat and drink to Pappano, who relished every moment of the inventive score. Particularly delightful were the shimmering evocations of the Genoan sea; sinister cloak-and-dagger moments seethed with intensity; and dramatic crowd-scenes crackled with energy and pin-point precision (credit here also to the excellent Royal Opera Chorus).

Elijah Moshinsky’s superb production continues to impress after 19 years (this is its fifth revival, and overseen by the man himself). Making the most of the simple, but highly effective, set with richly atmospheric lighting, Moshinsky deftly centres-in on the crucial elements of the story, not the most overtly romantic in Verdi’s output, so that we care passionately about its protagonists.

So, despite a compelling and in many ways remarkable performance in his twenty-sixth new role for Royal Opera, the evening was not all about Domingo – which is exactly how it should be. His performance played its important role, along with everyone else involved, in contributing to a powerfully moving experience.