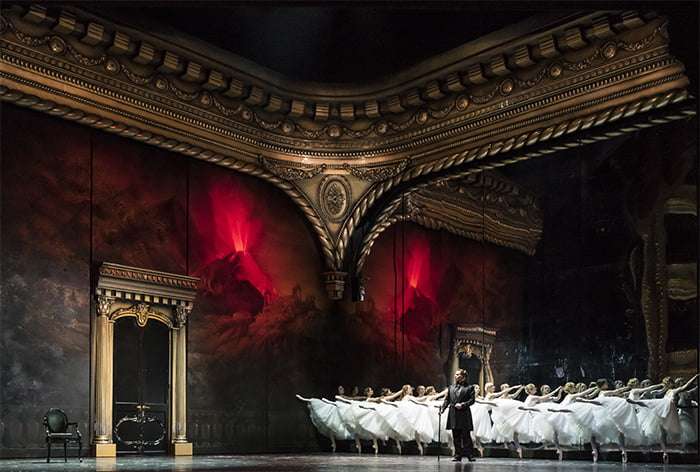 I wonder how many in the audience responded to Stefan Herheim’s ‘meta-narrative’ in the maverick Norwegian director’s staging of Verdi’s 1855 five-Act Paris Opéra blockbuster Les Vêpres siciliennes. His production marking the Verdi bicentenary in 2013, was, amazingly, its Royal Opera premiere, and Herheim’s first and still only work in the UK. It is now back for its first revival. The story is based on the French occupation of Sicily in 1282, with three of the four leads, the Sicilian patriots Henri, Hélène (the woman he loves) and Procida ranged against the tyrannical French governor Guy de Montfort, who discovers he is Henri’s natural father.

Herheim and his design-dramaturgy team have been subverting both the conventions of opera and the notoriety of Regietheater (director’s theatre) in Europe for years. Here they have not only updated Les Vêpres to 1855, the set also copies the interior of the Salle Peletier (the Paris opera house where it was first mounted, replaced in 1873 by the Palais Garnier), going further by turning the historical Sicilian rebellion against the French into a culture-clash between the Italian firebrand composer and the conventions and spectacle of French grand opera, in particular the ballet element – although the half-hour ‘Four Seasons’ ballet in Act Three has, as Verdi sanctioned, been cut. Les Vêpres is mature, mid-period Verdi, coming after La traviata, with some wonderful music, but it has never settled in the repertoire, so whether or not this Team-Herheim spectacular floats your boat, you should not miss this memorable show. 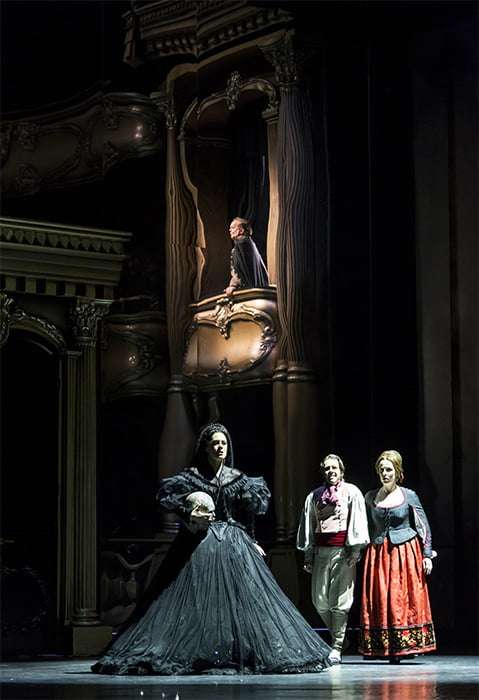 This is deconstruction and re-invention on an epic scale, with a scenery-painting of Mount Etna blowing its top the only Sicilian reference. Otherwise Procida, now a ballet-master with a limp, Henri and Hélène are the forces of renewal coming up against the corrupt Parisian artistic conservatism of Montfort’s opera-house general director, the guardian of a style of extravagant and empty spectacle that by 1855 was past its prime. The printed programme gives us Verdi’s plot, while Herheim toddles off on his own, strewing our path to enlightenment with a lot of masks, a severed head, a parade of Degas-style Sylphides-like ghosts from the original, and Procida stupendous in alarming drag skewering the French with the Tricolore. Another factor is Herheim’s tampering with the fourth wall, the invisible barrier between stage and audience, with a section of the Peletier stalls and boxes crowded with philistine French-opera consumers being trundled around the stage, its scale matching Covent Garden’s and mirrored screens reflecting the ‘real’ audience, although what is real and what isn’t is up for grabs. It is all executed with panache and gets behind the music, but there are moments, as in Act Four when Henri confronts Procida and Hélène who are about to be executed for the assassination attempt on Montfort, when the original resurfaces very satisfactorily without any Herheim intervention.

If the full Gesamtkunstwerk treatment is overplayed, it has a terrific cast of principals, all three men from the 2013 run, who go to town on some great arias and even greater ensembles. Montfort is the most three-dimensional character, and Michael Volle presents him as a Philip II prototype, with his fine legato and tonal clarity at their best in the, again puzzlingly, beautifully directed recognition scene between father and son, Henri. The latter comes into his own in the Act Four prison setting when his aria made maximum impact – just when you thought Bryan Hymel’s tenor couldn’t possibly go higher, it does, with an exciting sense of danger. Malin Byström has her work cut out saving the huge role of Hélène from being swallowed whole by the production, but Hélène’s first aria summed up her range impressively, she was very moving in the tragedy of Act Four, and she made neat work of the coloratura in Act Five’s bolero. Erwin Schrott was in big voice as Procida and fielded everything that came his way directorially with total conviction. Maurizio Benini’s conducting is supportive but rather led by the staging. The Orchestra produced some wonderful sounds, emphasising the darkness at the music’s core.