John Gay / Benjamin Britten
The Beggar’s Opera – Ballad opera in three acts, with music realised by Benjamin Britten from the original airs of John Gay; libretto by John Gay with alterations and additions by Tyrone Guthrie

Musicians from the City of London Sinfonia
Christian Curnyn 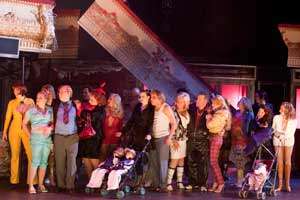 On entering the auditorium of the Linbury Studio Theatre one was struck by the monumental reconstruction of a section of the tiered auditorium of The Royal Opera’s main house dominating the stage, together with the section of the front tabs bearing the familiar royal insignia – although with “C III” rather than “E II”. In the seats of the tiers were members of the cast and also two-dimensional cut-outs providing additional ‘audience’. The bold designs locating the action in and around a Covent Garden of the not-too-distant future, with more neon signage than exists currently, is not a bad idea – linking as it does the sort of market-environment for which the area was once famous.

On paper there was a cast of seasoned pros known for their ability to hold a stage and deliver theatrically intense portrayals – Tom Randle, Susan Bickley, Donald Maxwell, Leah-Marian Jones and Jeremy White, to name but a few.

The augurs were good.

Not so, alas, the execution. 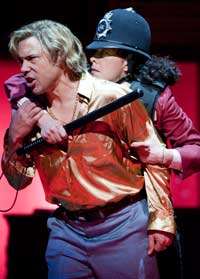 The spoken prologue was declaimed by the Beggar as played by Sirena Tocco and dressed as a Royal Opera House usherette, and then the musicians started to play. The conductor, Christian Curnyn, recently conducted a fizzing staging of Handel’s “Partenope” at English National Opera. He joined the production of “The Beggar’s Opera” following the death of Richard Hickox.

Following a reasonably spirited overture, during which the brilliance of Britten’s spare orchestration and the virtuosity of the players of the City of London Sinfonia graced the ear, things started to go awry. It became quickly apparent that pace was lacking. There is a great deal of dialogue and this needs to link the musical snatches far more effectively than it does here. Dialogue in a ‘ballad opera’ such as this should surely roll into and emerge from the music, but here there was speech … then a musical introduction … then the number itself … and, then – after a brief pause –, more dialogue … and so on. It deflated any tension that might have been generated and impeded the flow of the narrative.

Also lacking from stage and pit was any sense of earthiness. These are characters from the seedy underbelly of society and yet they were speaking and singing with all the precision needed for a classic play, albeit with some attempt to drop the occasional ‘h’ or introduce a hint of Thames Estuary inflection. This inevitably jarred with the gaudy or ragged costuming and did not help make the characters remotely credible. There was also little sense of menace or danger. Tom Randle’s Macheath was not a dangerous quick-thinking two-timing highwayman but a languid Romantic hero. There was little sense of the tense dog-eat-dog underground criminal networks and corrupt world of Peachum, Filch and Lockit. It is all far, far too genteel and overly-operatic … and surely misses the entire point of the work. 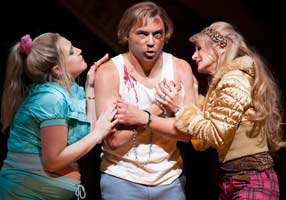 There are other unfortunate distractions. The usherette/beggar meandered in and out of the action to little dramatic effect, and some of the choreography was never going to work in the confined stage area.

On a purely musical side there is some excellent singing and playing. One occasionally relished Britten’s clever orchestration and enjoyed the orchestral playing – the contributions of harpist Thelma Owen stood out. Vocally Susan Bickley, Jeremy White and Donald Maxwell managed to inject some allure into the proceedings, even if they were uncharacteristically inert dramatically. Leah-Marian Jones’s Polly was rather too lushly sung for such a youthful character, and whilst Sarah Fox’s bright and engaging tones suited Lucy well she lacked punch in the lower reaches of the part, and her speaking voice was too lightweight. Only the fruity tones and stage dominance of Frances McCafferty really managed to lift the spirits. Indeed, her witty and knowing portrayal of Diana Trapes as a larger-than-life incarnation of one of Beryl Cooke’s larger ladies was the highlight. The minor-character ensemble also sang well but is allowed little scope to develop any real and lasting individuality.

Essentially what is needed is a cast that mingles-in a few actors to give more bite and energy and to really deliver the musical numbers with a sense of flair and enjoyment. Instead, this became a dispiriting evening and the lack of involvement of the first-night audience in the decision as to whether Macheath should live or die said it all.