Prokofiev
The Gambler – opera in four acts to a libretto by the composer after Dostoevsky’s novella [sung in the English translation by David Pountney, with English surtitles] 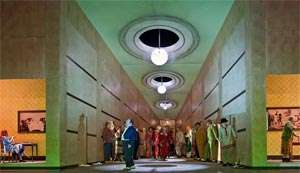 Much prized by his devotees though all but unknown to the public at large, Prokofiev’s “The Gambler” (based on the psychologically explicit novella by Dostoevsky) typifies the ambition but also overreach of the earlier (i.e. – pre-Soviet) stages of his career. Composed during 1915-17, a production was left in abeyance owing to Russia’s subsequent collapse, while a much anticipated Soviet staging a decade on fell foul of cultural intrigues. The opera was only produced in 1929, this Brussels staging utilising a French translation and incorporating the extensive revisions the composer had made in the interim. Not until 2001 was the original performed (conducted by Gennadi Rozhdestvensky in Moscow), though a staging at English National Opera well over a decade earlier had finally granted UK audiences access to the work. 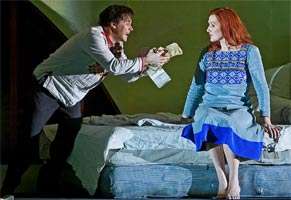 That ENO showing (never revived) was in a production by David Pountney, whose English translation is featured in this Royal Opera staging. Replete with the numerous self-conscious witticisms and ‘in jokes’ one would expect, this often has surprisingly little to do with the vocal writing. Although the history of the work openly admits of performance in translation, it should be borne in mind that Prokofiev’s original conception was for a naturalistic setting directly in the lineage of Dargomïzhsky and Mussorgsky; something that was diluted in the revision without being negated as such. A more pressing problem is the international make-up of the cast, with the English text being subject to a whole range of emphasis and intonation such as tended to impede the projection of the vocal lines. 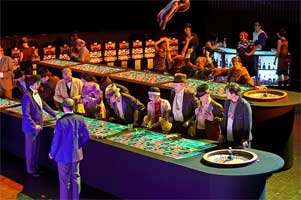 The present production seemed typical of Richard Jones in that its striking overall conception – that of a setting which took in aspects of a zoo, hotel and casino, all of them appropriate in context – too often failed to answer those questions it posed. Much of this failing stems from the generalised nature of the staging – taking in an array of styles and fashions from the fading decadence of the period around the opera’s initial completion to the shallow glamour of the post-war era, resulting in a mêlée of competing images that arguably get in the way of the music and certainly rode roughshod over matters of character development. This, in turn, placed at a further remove an opera requiring continual dramatic focus if its musical component is not to become undifferentiated, even diffuse. 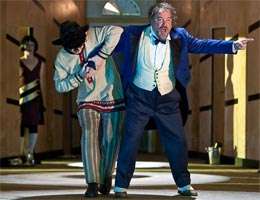 It might, of course, be argued that character development per se is at a premium in an opera whose protagonists tend to be as non-empathetic as they are inconsequential. That said, Roberto Saccà does strive gainfully to make Alexey – around whom the whole tawdry scenario more or less revolves – a figure of substance, belatedly seizing the initiative such that the dilettante anarchist of the first three-quarters becomes a hustler who trounces his social superiors at their own game; albeit at the cost of whatever personal integrity he has left. That he spends much of the time in the grip of an infatuation with Paulina might have been more believable had Angela Denoke matched her technical security with emotional allure – without which, she conveys little more than a functional sexuality.

No such uniformity could be levelled at John Tomlinson – his portrayal of the General is as overbearing as it is hollow, with a stage-stealing descent into madness that brought the ‘Boris’ antecedents of his role into judicious perspective. Equally fine was Susan Bickley as Babulenka – whose death everyone is anticipating and whose sudden emergence is a true theatrical masterstroke; while her scene with Paulina, after she has lost everything on the roulette table, evinced pathos absent elsewhere. Kurt Streit lacked vocal presence as the Marquis, neither as obsequious nor ominous as his appearances require, with Julia Adamonyté likewise anonymous as Blanche, but Jeremy White and Emma Bernard gave trenchant cameos as the Baron and his wife, while Mark Stone turned in a stylish Mr Astley.

The Royal Opera Chorus acquitted itself capably in crowd scenes that might have been afforded more presence in the production as a whole. Conducting with evident concern to align the music’s driving rhythmic ostinatos with its translucent harmonic richness, Antonio Pappano went much of the way to instilling into the opera that expressive identity the production often lacks – not least in the oddly matter-of-fact presentation of what should be the climactic roulette scene. Not even he could disguise that the first two acts should have been telescoped into one, or that the orchestra carries the emotional brunt of the final stages to a degree that the vocal writing conspicuously fails to do. If such failings are intractable, Jones and Pountney might still have made more of a difference.