Tchaikovsky
The Tsarina’s Slippers – Comic-Fantastic Opera in four acts to a libretto by Yakov Polonsky, Nikolai Chayev and the composer after Gogol’s story Christmas Eve [sung in Russian with English surtitles]

Dancers of the Royal Ballet 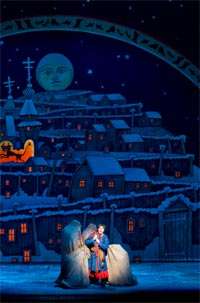 Christmas ostensibly came early with this new production (a first for The Royal Opera) of “Cherevichki”, here translated as ‘The Tsarina’s Slippers’ and the only comic opera from Tchaikovsky’s maturity.

Even by composers’ standards, Tchaikovsky was notoriously subjective when it came to assessing his own music. When this opera first appeared – as “Vakula the Smith” in 1874 – he not unreasonably considered it to be his best work. That he still seems to have believed so when the present revision appeared 11 years later – with such works as “Eugene Onegin”, Swan Lake, the First Piano Concerto, Violin Concerto and the Fourth Symphony behind him – is hard to fathom. The answer seems to lie in the music itself which, for the most part, is as impersonal and even safe as any he ever penned.

The source, itself among the least revealing of Nikolai Gogol’s stories, was “Christmas Eve” – which Rimsky-Korsakov was later to fashion into an opera that, owing to its intrinsic character, arguably suited his talents better. This centres on Oxana, a lively if strong-willed Ukrainian girl who is keen to get married but not at any price. Hence her agreement to wed the starry-eyed blacksmith Vakula if he can procure her a pair of the slippers (more properly ‘dress boots’) belonging to Catherine the Great. Initially despairing, Vakula enlists the assistance of the Devil, who happens to be a lover of his mother Solokha; together, they embark on a fantastical journey to St Petersburg, where the Imperial Court is at its height of pomp and ceremony (which may account for the overly nationalistic tone of proceedings in the second scene of the third act, though if Tchaikovsky intended a measure of irony here, it hardly registers in this production). Returning to his lamenting family and friends, Vakula presents his booty (!) to Oxana and the two are then united among suitably festive rejoicing. 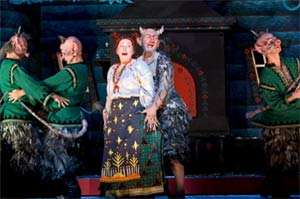 For this staging, The Royal Opera has commissioned an impressively high-gloss presentation that makes the most of the opera’s attractions without at all seeking to minimise its shortcomings. After the roasting (!) meted out (unjustly) in some quarters to last year’s production of “Hänsel und Gretel”, the intention may simply have been to play it safe. Certainly Francesca Zambello’s production is big on spectacle but does little to bring out whatever nuances of character may be lurking within the music. In this respect, Act Three fares most successfully – whether in the fastidious shades of green in the scene with the water nymphs, or the gilded elegance that denotes the Court. The music’s balletic elements, too, are most persuasively handled – Alastair Marriott’s choreography at one with the bewitching splendour of dances that, along with their more rustic counterparts in the earlier acts, are the most enduring aspect of Tchaikovsky’s score. A feast for the eyes and senses, then, without suggesting such ‘chocolate box’ imagery is anything other than its own justification. 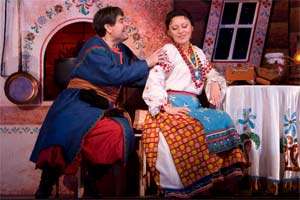 The cast is a strong one, though one that may need a couple of performances to reach its optimum level. In particular, Larissa Diadkova’s ‘inviting’ Solokha was not without a touch of squall in the upper register, while Maxim Mikhailov’s hard-working Devil often betrayed grittiness of tone. The younger couple, however, did justice to their roles. Olga Guryakova’s Oxana was vibrant if not exactly subtle as Oxana, yet this was in keeping with her unashamedly headstrong nature, while Vsevolod Grivnov was a persuasive Vakula – probing beyond his character’s robust exterior to uncover a soulfulness and vulnerability that feel exactly in accord with the music as Tchaikovsky conceived it. There was a suitably imperious and disinterested cameo from Sergei Leiferkus as the Empress’s nameless lover.

At just over two-and-quarter hours, “The Tsarina’s Slippers” is not a long opera but it can be a diffuse one. Alexander Polianichko’s conducting was not always to its benefit, lacking a sense of direction and failing to prevent longueurs in the first two acts seeming otherwise. Yet the rustic immediacy of the music was vividly conveyed, while his handling of the ballet sequences in the third act served to point up their musical quality. If, on this first-night showing, this is not the opera Tchaikovsky would have us and, moreover, himself believe, it still has most of the attractions of a seasonal favourite. A pity, therefore, that the present run of performances will be over well before Christmas is upon us but it will be televised during the festive time.