The Orchestra of the Royal Opera House
Jacques Lacombe 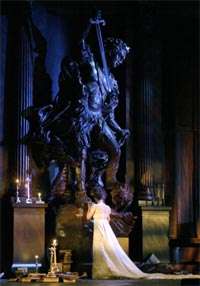 The withdrawal through illness of Deborah Voigt as Tosca has brought stellar replacements in the form of Angela Gheorghiu and Nelly Miricioiu. This was Miricioiu’s ‘first night’ and she returns in a week’s time, on the 18th, to close Royal Opera’s current season.

Miricioiu presents a Floria Tosca that is shrewd and confident, a good woman who knows her own mind and has a generous heart; Miricioiu’s account of ‘Vissi d’arte’ (in Act Two), which sums up Tosca as a paragon of virtue, is dignified and eschews a big finish. It’s affecting and effective. If, overall, Miricioiu’s top notes are a little underpowered and lacking body, she brings much experience to the role. 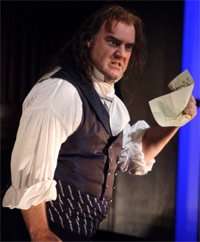 Bryn Terfel is a commanding presence and holds the stage, certainly with his well-projected and unforced singing; yet, although there can be no doubt as to Chief of Police Scarpia’s ruthless scheming and lust (both for Scarpia and for revenge), the character’s blackness is less apparent; this Scarpia is a bully, a heartless and selfish individual, yet there is a dimension – pure evil – that is missing.

Marcello Giordani presents Cavaradossi, employed to paint a portrait (one that Tosca is somewhat jealous of) as part of the church’s décor. Cavaradossi is also a good person – he and Tosca are made for each other. He gets inveigled with the escaping political prisoner, Angelotti, who has sought refuge in the church; from hereon Cavaradossi is sucked into Scarpia’s scheming. Giordani’s singing is easeful and open, if a little strenuous at times.

With sets and costumes that are pleasingly traditional and rarely distracting, even if the lighting can be too uniformly gloomy, this current revival (the third) of Jonathan Kent’s production that was unveiled in 2006 is once again proving to be extremely popular. Jacques Lacombe’s conducting is noteworthy in terms of vivid projection; at times, the orchestral playing, seasoned to a fault, is rather generalised and Lacombe has a tendency to push ahead and snatch at phrases. Conversely, he can elicit some subtle blends and hushed dynamics; the heroic horns launching Act Three, then the interweaving solo cellos, and then a haunting clarinet solo, all displayed the ROH Orchestra in a range of responses.