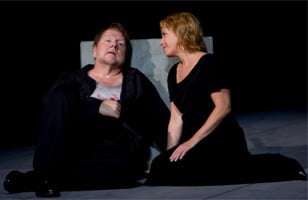 Christof Loy has done it again: he’s divided opinion. The boos (premeditated by the sound of it and courtesy of Rent-a-Mob) rang out loud and angrily when he took his curtain call following this first night of “Tristan und Isolde”. There were some “bravos” as well – but more dissenters than cheerers. A shame, it’s a good production – timeless and unspecific, the story told without much distraction, the listener able to watch with their own imagination not impinged upon. If the sets are minimal – a chair or two, a candelabra – this is the forefront of the stage, the bare boards for Tristan and Isolde and less so, but significantly, for Brangäne, Kurwenal and King Marke; an uncluttered space. Behind the centrally-placed curtain is a lavish dining-room, sometimes inhabited by the leading players, otherwise it’s for Marke’s courtiers (after a good dinner, they look the worse for wear!).

As in his compelling direction of Berg’s “Lulu”, Loy relies on gesture and character interaction; it’s subtle, it’s revealing. It’s not conventional. It works. The lighting is excellent, particularly the translucent darkness and the suggestion of mystic sunshine; the costumes are equally non-committal. Again, it frees up specifics; this is makes for creative involvement for the watcher. That said, the screen placed extreme-left to the stage tends to ‘amplify’ and harden voices when singers are close to it; and there’s a lot of left-sided positioning, which will strain some necks; maybe most of the boos came from that side, too. 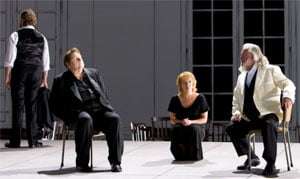 The ears – this is music, after all – will have found, on this first-night, the Orchestra of the Royal Opera House luminously sounding the Prelude, but the playing was still settling, and Antonio Pappano’s conducting of Act One was just a little too straight, simmering but the equivalent to a hidden hand of poker. Initially, Nina Stemme gives Isolde all of her frustration and anger; she can melt, too, courtesy of the love potion (not the poison she thinks, Brangäne made the switch) so that the change from distance and suspicion to mutual adoration is a magical transformation for both Tristan and Isolde. 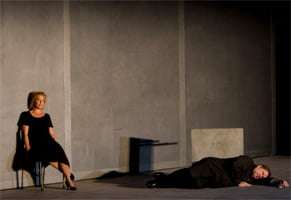 As Brangäne, Sophie Koch comes across well as Isolde’s loyal confidante – although she has a liaison of her own with Kurwenal, and he is wonderfully taken by Michael Volle, superbly acted and sung; and John Tomlinson’s presence outdoes his now-blustery singing, although there have been more humane and outraged impersonations of Marke (Matti Salminen takes the role for the last three performances).

To open Act Three, Pappano conducts the Prelude as solemn and introspective, Tristan sitting and motionless, the cor anglais player a model of sensitivity to notation and expression; come the close, following murderous mayhem and much soul-baring from all concerned, Stemme begins the ‘Liebestod’ on the ground, untangling herself from Tristan (who has died with her arms around her) to have her own wished-for demise, lit in golden colours, a divine release. It’s moving. Good, too, that the production allows some silence before applause crashes in.

If you liked and appreciated Loy’s black-and-white, shrewdly distilled “Lulu” (from a few months ago) then you’ll welcome his observations for “Tristan und Isolde”, for he avoids silliness and “as seen on TV” connections; if there are blanks to fill in, why shouldn’t the audience do so?