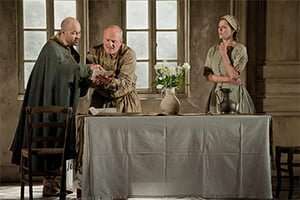 Even before its premiere at last year’s Aix-en-Provence festival, there was a good deal of interest in George Benjamin’s Written on Skin. Although he could never be considered a miniaturist, Benjamin had not before attempted a piece on anything like this scale; his previous opera, Under the Little Hill (given at the Linbury Theatre in 2009) tackled the opera genre in so oblique a manner that it might almost be termed a ‘scena for voices and instruments’. What is clear about the present work is that it is no sense a chamber opera, despite the pointedly restrained handling of its orchestral forces, and that it sustains the 90-minute duration with almost unbroken conviction: only broken by the pauses between each of the three parts – making one regret that Benjamin could not have indulged the orchestra a little more in effecting appropriate transitions so as to create a seamless entity. Even so, the concentration and momentum evident throughout the whole can hardly be denied in what is a triumph for composer, writer and director.

If Katie Mitchell’s staging is the most debatable component, this is not because it fails on its own terms but rather because it places a construct on the opera which is not necessarily reflected elsewhere. The stage itself is divided into two layers – with most of the scenario being played out in the main living space on the lower layer, the main space on the upper layer largely occupied by the Angels who pervade and finally dominate proceedings as they oscillate between the present and that of the era in which the drama takes place some eight centuries ago. Other rooms and spaces emerge according to the requirements of the action, but such an arrangement – while it does not impede the drama as such – imposes a mosaic-like division onto music whose greatest asset is its focus and continuity. That said, Vicki Mortimer’s designs point up the disparity between then and now with real visual allure and Jon Clark’s lighting is often as fastidious as the music it serves to illuminate, while the slow-motion presentation of the denouement is as breath-taking in conception as it is in execution. 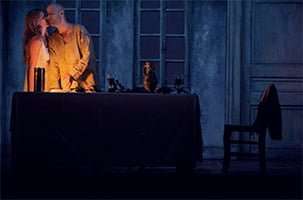 In what is his second collaboration with Benjamin, Martin Crimp has penned a text (“libretto” being a term he prefers to avoid) that conveys the claustrophobia and increasing desperation of its main characters with sustained intensity. While the grating semantics between imagery of the present and the past is likely unavoidable, more problematic is the almost constant recourse to the alienating device of the protagonists narrating their actions as if in real-time – thereby imposing a didactic quality on the drama whose purpose would have been far better served by the musical and visual components. While this has a notable tradition in post-war British opera (not least the narrative element in several of Britten’s operas), its presence here might be felt as a further impediment of that dramatic inevitability which Benjamin otherwise maintains so assuredly through musical means. Not that Crimp’s words are, in other respects, to be found wanting in its articulating of the self-realisation that the three main characters undergo over the course of their fateful and ultimately tragic interplay.

As will have been inferred, Benjamin’s contribution is the most consistently impressive facet here. While his earlier music may hardly be un-dramatic as such, the expressive range as contained in Written on Skin is not only appreciably greater than hitherto but also wider than is likely to be found in almost all other operas (British or otherwise) of the past quarter-century. Although the forces used are decidedly those of an orchestra rather than an ensemble (this is not an opera that could easily be mounted in the Linbury), the resourcefulness of its deployment as well as the fastidious manner in which its soundworld has been geared to the situation confirms a mastery of so much more than craft alone. That the example of Birtwistle is evoked at certain junctures matters not when the allusions are metaphorical rather than literal, as is that of other composers – not least Debussy in the climactic transition to Scene 14. Mention must also be made of Benjamin’s use of bass viol, glass harmonica and mandolin as subtle additions that evoke so much through their presence.

The five singers could hardly be faulted for their contributions. As The Protector, Christopher Purves gives a strong and increasingly fraught assumption of a role that has arguably been drawn in overly stereotypical terms – the iniquities of his actions made explicit without necessarily being accounted for. Bejun Mehta makes much of The Boy’s enigmatic presence without his ever seeming merely a cipher for the vulnerabilities of others, confirming him as among the most powerful and involving of present-day countertenors. Victoria Simmonds (the only singer not from the original Aix production) is vividly sensuous as Marie and Allan Clayton is unexceptionally fine as her uncomprehending husband. It is Barbara Hannigan whose dominates proceedings with an assumption of Agnès that captures her rapid and fateful comprehension in all of its conflicting ecstasy and anguish: its outcome a confrontation with her husband whose visceral impact is the greater by its being prepared, dramatically as well as musically, right from the outset of the opera.

No stranger to the opera-pit, George Benjamin himself proves an assured and insightful guide to a score whose manifold intricacies and prevailing inwardness are yet projected confidently by a Royal Opera House Orchestra playing at something like its best – setting the seal on an impressive production of a stage-work whose very real qualities can hardly be gainsaid. Written on Skin is already recorded on Nimbus CDs and is due a DVD release on Opus Arte.