The Royal Opera needs a new hit and Robert Carsen is the man to supply it. The London-based Canadian director’s comparative neglect on these shores has long been a mystery, for while his visual flair and musical sensibility are lauded throughout Europe and beyond, most of his previous UK outings have been hand-me-downs from the likes of Paris or Aix. So a very warm welcome for this fizzing Falstaff, a brand-new co-production with La Scala and Canadian Opera Company which should ensure that Carsen is no longer a prophet without honour in his adopted country.

The Garter Inn of Shakespeare’s Windsor is rendered in Carsen’s 1950s’ update as a high-society London club: the Turf or the Jockey, perhaps. Within its walnut-panelled surrounds a squalid human land-mass, Sir John Falstaff by name, adds to his collection of room-service trolleys and harasses the starched-collared staff from the comfort of his rancid pillows. Thus opens a playful interpretation of Verdi’s comic masterpiece that layers wit upon gag without ever tipping over into crudity. Like the music itself, in fact. 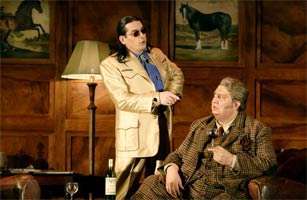 Ambrogio Maestri has built a career playing Falstaff, and he is every inch the Fat Knight. Tall, grubby and imposing, he looks like Sir Les Patterson on a bad day, yet he delivers Verdi’s writing with resonant power and infectious good nature. From the buck-and-wing dance at “Va, Vecchio John” to his defeated slump in the stables (“Mondo ladro – mondo rubaldo”), Maestri invests the character with a hundred nuances. He receives exceptional support from Ana María Martínez, vocally resplendent as Alice Ford, and from Marie-Nicole Lemieux as a fruity-feminine Mistress Quickly (her abortive curtsey is a delight). As the young lovers, Amanda Forsythe sang Nannetta with sweet allure but Joel Prieto erred to the sharp as her beloved Fenton.

Dalibor Jenis sounded thin whenever he delved into Ford’s lower register, while his characterisation was too foursquare for a role that depends on emotional ambivalence to make its mark. Which is certainly not a criticism that could be levelled at Rupert, a newcomer whose eye-catching performance in a silent role was hilarious in its understatement. This was the scene-stealer who could fell Falstaff’s dignity with a disdainful twitch of an ear or a timely turn of the head. Bliss! Oh, and by the way, Rupert is a horse: the real thing, too; not a bamboo puppet.

In an authoritative performance from the pit, Daniele Gatti lent cohesion and sympathetic pacing to the elaborate score. The ROH Orchestra played beautifully for him: the full-bodied sound brimmed with zest yet was impeccably balanced and light on its feet. Time and again, conductor and players showed by example what a miracle of orchestration Verdi achieved in this, his final opera.

For such a compact work, and one that zips through its plot at a fair lick, Carsen manages to pack his production with memorable delights. The recurring horse-and-hound motif gives rise to some savoury sight gags – Falstaff’s gift of a fox brush to poor Alice, for example – while it underlines the fact that the old man views women as mere fillies for the riding. Food is another constant presence, and even the Ford household’s sprawling lemon-and-salmon kitchen is riveting in its ghastliness and hilarious in its destruction (Ford’s merry band of knight-catchers desecrate the place with cat-like tread), while the final scene with its Fairy Queen episode spirals into a miasma of climactic nonsense that overwhelms the prostrate Falstaff, before re-emerging as – what else? – a sumptuous dinner party to round off the evening.

There were some isolated boos at the close, though goodness knows why given Carsen’s direction manages to be inventive without being provocative. Who knows – perhaps it was Rupert’s absence from the curtain call that riled the neighsayers. Make no mistake, this a five-star production.