Wagner
Lohengrin – Romantic opera in three Acts to a libretto by the composer [sung in German, with English surtitles] 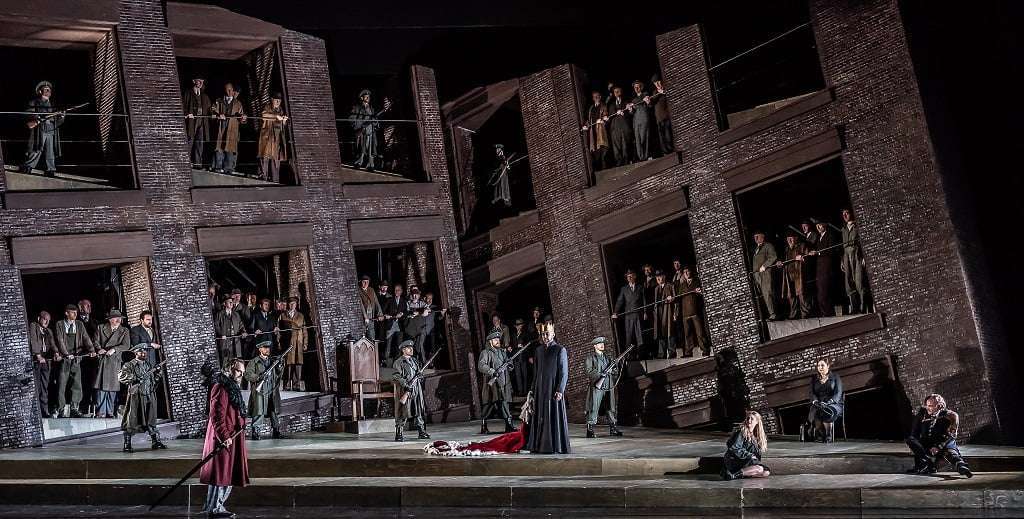 Wagner’s Lohengrin is often considered a prime example of echt-romantic German operas, given its historical Middle-Ages setting and its succession of scenes and that comprise the drama. In that sense a conventional production may give a sense that the characters are being positioned around the stage like chessboard pieces, setting them up carefully for subsequent moves to follow. For much of the first Act of this new staging (admittedly the first half is one long exposition of the back-plot) David Alden seems to be content to do just that within Paul Steinberg’s monumental sets depicting an uneven world of militarism within Brutalist imposing architecture. Revelatory or provocative ideas are lacking, though aspects of female subservience, weak leadership, use and abuse of symbols of power (sword, crown, thrones) and the summary branding and ostracising of outcasts (Telramund) are signalled. Interesting video projections herald Lohengrin’s arrival, though the effect is oddly muted, despite the rousing orchestra and the increase in illumination from behind and above rather than face-on. 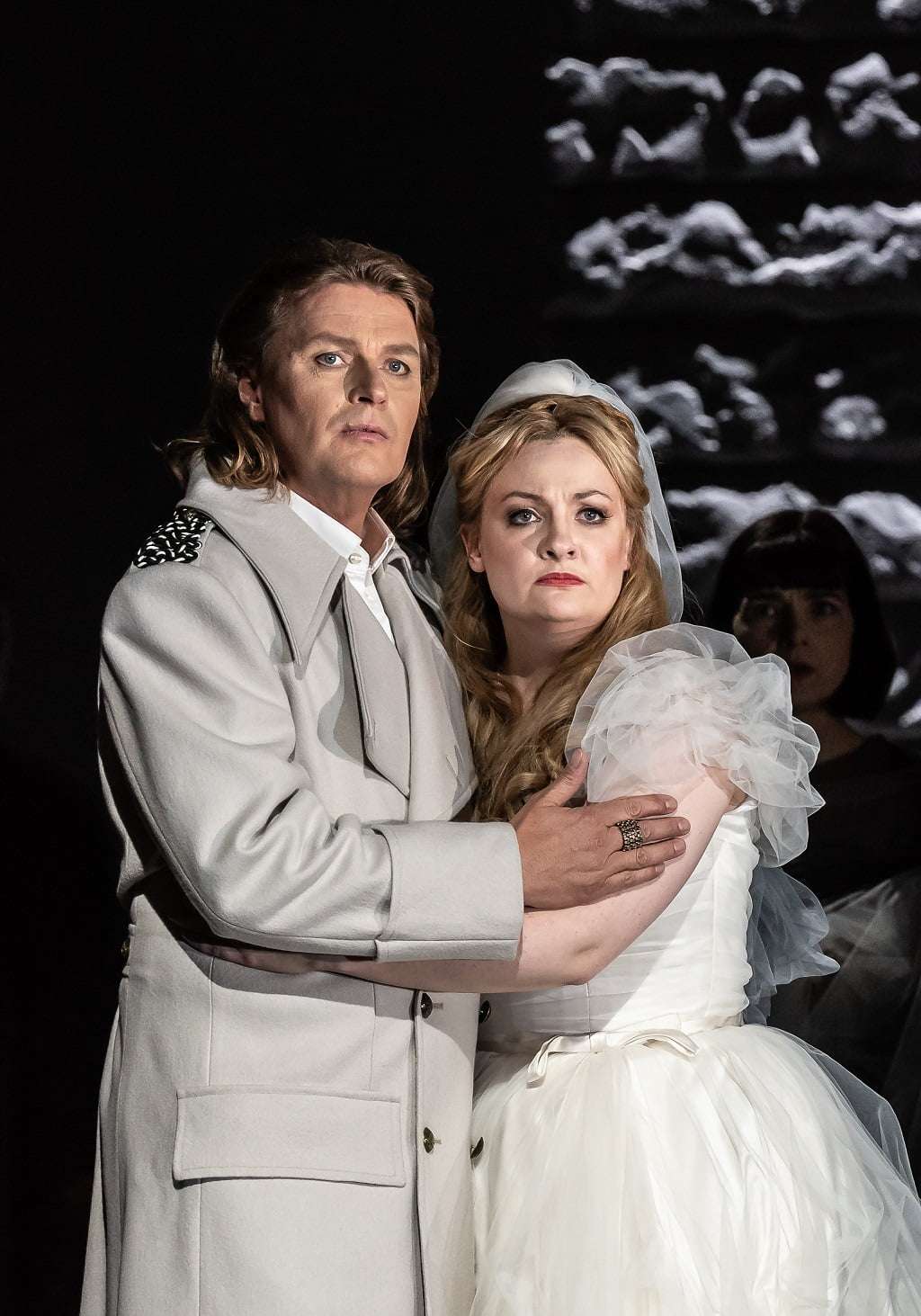 Act Two fares rather better – here the sets are reversed, and we see the political machinations occurring behind the facades of the buildings and witness the stage-management of public events under an oppressive regime, the saintly swan image appropriated for less than savoury use. Lighting is generally very effective here, although some of the clutter results in some undermining stagecraft to clear it. For example the thrill of Ortrud’s ‘Entweihte Götter’ falls victim to distracting shadowy figures removing chairs from the gloomy recesses of the set! One idea that does stimulate is the suggestion that Telramund has strong residual amorous/paternal love for Elsa, trying to protect her from being entrapped by the snare he and his wife Ortrud are laying for Lohengrin.

Act Three returns to a more conventional approach generally, though continuing some of the themes introduced in the middle Act, and the emergence of Lohengrin and Elsa into the stalls area of the auditorium as a celebrity couple is a miscalculation, an opportunity for mobile phones to be switched on – by some – to capture this important moment for posterity! Otherwise the subtle use of lighting within the auditorium is effective – the ROH becoming the holy and undefiled spaces of Monsalvat, and the Minster in Antwerp.

Luckily the musical offering is outstanding. Under Andris Nelsons we have an interpretation contrasting luminous and warm string playing against darkly threatening and sombre woodwinds and thrillingly intense militaristic brass, the spatial effects of the latter in the final Act made awesome and unsettling, resonating with empty pomp. Nelsons allows the more expansive sections to breathe without becoming languid, allowing some romanticism to pervade the gloom; interestingly the Act Three duet between Lohengrin and Elsa is relatively fleet. Vocally, the chorus is one of the most important ‘characters’ of the cast; the complexity of the writing emerges with clarity and brilliance. 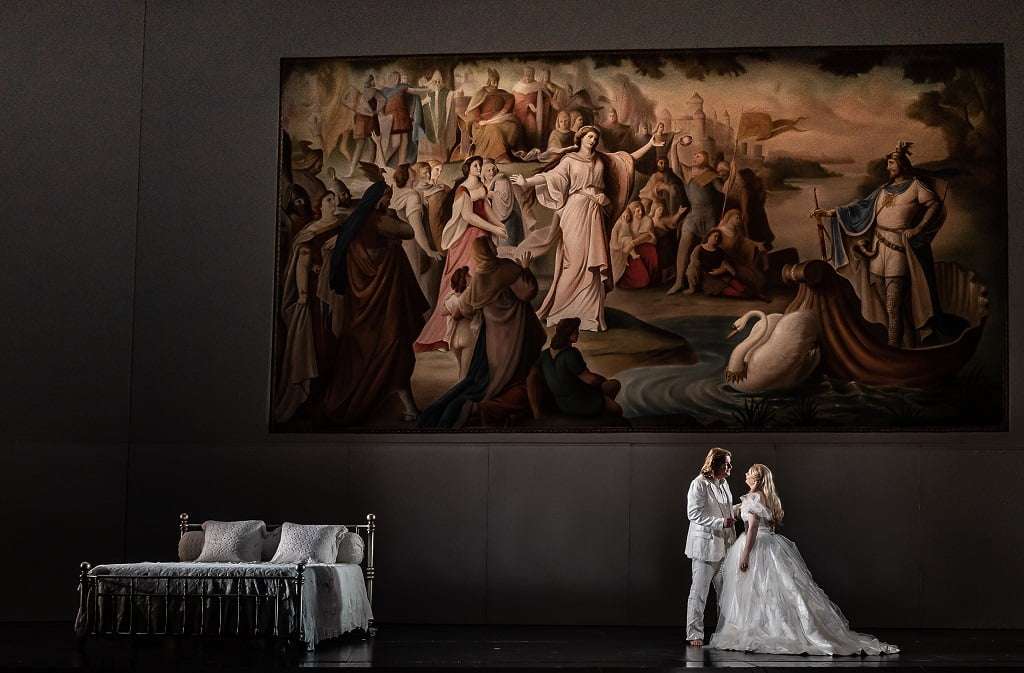 As Lohengrin, Klaus Florian Vogt demonstrates why he is in much demand, heady and ethereal and he can also bring a steely quality to the voice, needed in Act Two particularly. Oddly though, and probably intentionally, his interpretation is oddly earthbound and dramatically passive – only his admonitions to Elsa over the three secrets startled by their rather aggressive quality. Georg Zeppenfeld, Bayreuth’s current reigning bass, is a richly sonorous Heinrich, bringing some aspects of the text to the fore fascinatingly. His portrayal of the King as a weak, indecisive and perhaps controlled ruler is strongly etched. Thomas J. Mayer is a fine Telramund. He too knows how to inflect the text with skill and his slightly gritty tone helps him deliver a trenchant portrayal of this flawed noble. Kostas Smoriginas is a strong presence as the semi-incapacitated herald. Christine Goerke, like many of the best interpreters of Ortrud, knows the value of allying stillness with sudden movement. Vocally the part suits her well, and she contends with the thrillingly brass-dominant tumult at the culmination of ‘Entweihte Götter’ admirably. She’s also not afraid to harden the tone for dramatic purposes.

With the withdrawal of Kristine Opolais from the original cast The Royal Opera took the daring step of casting a recent alumnus of the Jette Parker programme to fill the difficult role of Elsa. A brilliant move as Jennifer Davis comes close to stealing the show with a voice that is both creamy yet mettlesome – Elsa needs power as well as sweetness – and allied to a very sympathetic presence. She has a great career ahead of her.

This is a sometimes frustrating staging that highlights some of the darkness of the work, and indeed the history of aspects of Wagner presentation during the last century, with high musical standards.