George Benjamin
Lessons in Love and Violence – Opera to a text by Martin Crimp [co-commission: world premiere; sung in English, with English surtitles] 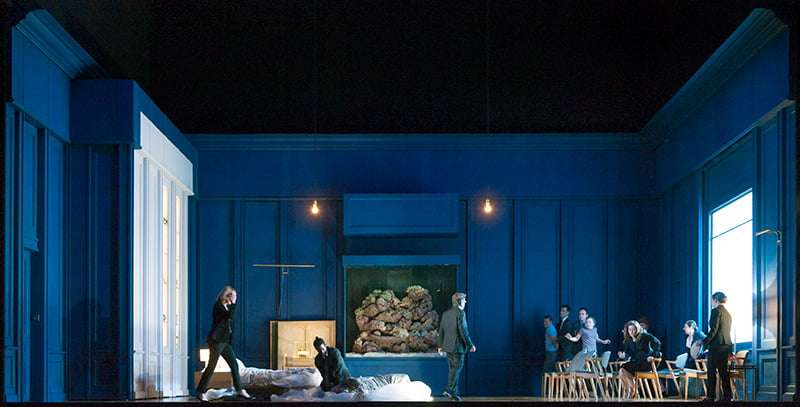 Expectations could not have been higher for this new opera, given the phenomenal international success of George Benjamin’s Written on Skin. The premiere of Lessons in Love and Violence played to a sold-out house, and this point alone is a matter of celebration.

The story is loosely based on Marlowe’s 1594 play Edward II though the production is modern in conception and does not require knowledge of the literary source. Indeed the name Edward is never used; characters refer only to “the King” and consequently the themes of love, lust and violence are universal and timeless.

The King loves his children, and he has a kind of love for his wife Isabel. But the King is intoxicated by Gaveston, who may or may not be a worthy recipient of his attention. The country is falling apart and the King’s military adviser Mortimer is not impressed with the King’s handling of matters. He is imperiously banished and a chain of murder and tragic events is set irreversibly in motion, against a backdrop of civil unrest.

Aggression and cruelty are present but never overblown in Martin Crimp’s sensitive and evocative text, as in the abandoned King’s aching meditation, “Love me. Burn me. Make me alive.” There is no red-hot poker in Crimp’s version but the idea of it nevertheless hovers over this work, not least by omission. Dialogue unfolds more naturally than in earlier collaborations with Benjamin, almost as everyday speech, and key phrases lodge in the mind. 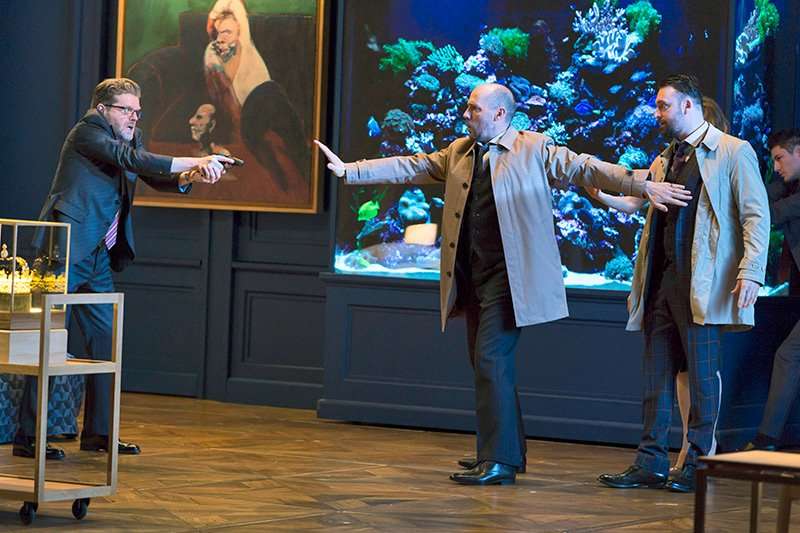 Whereas Written on Skin has many conventional elements (a love-triangle, a starring role for soprano, and a narrative that has us thinking “what happens next?”), Lessons in Love and Violence is more of a symphonic poem, in which the unfurling logic of the meticulously thought out form and structure keeps the piece going. We enter a soundworld that is endlessly fascinating, utterly beguiling in orchestration, harmony and rhythm. This is music that appeals to the senses; yet it is intellectually intricate too.

Benjamin conducts with pinpoint precision and the Orchestra of the Royal Opera House plays with controlled abandon, luxuriating in a wash of colour, underpinned at significant moments with prominently-placed cimbalom, drums and harps in one of the boxes. Sometimes aligned to the Baroque in terms of ethereal timbre, the singing is stellar and each character has his or her moment of drama. Stéphane Degout makes for a complex and conflicted King, haunting in the a cappella moment with Gaveston, sung in oily fashion by Gyula Orendt. Pete Hoare has the vocal power and presence as Mortimer to kick-start the drama by challenging the King, and Samuel Boden is especially beautiful in his exposed lines.

Barbara Hannigan is thoroughly at home; and she is so damned watchable as an actress, let alone a singer. She reveals a wife, a queen, a mother, and a lover; add to which an attention to detail in matters other than musical. Given her thrilling and effortlessly agile, soaring voice, she is nevertheless careful not to unbalance the broader dramatic and musical design of the whole.

Katie Mitchell’s direction is admirably deft and clear (if with unremarkable sets and designs) of a taut work, just over eighty-five minutes, and it does not lag for a moment. In terms of pure music, Lessons of Love and Violence is arguably a more rewarding creation than Written on Skin, and one that demands to be heard again and again.