Haydn
The Seven Last Words from the Cross 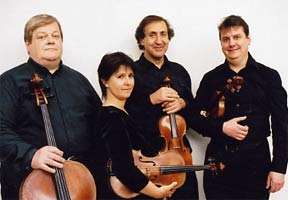 Written for a sombre Lenten service at Cadiz Cathedral in 1785, Haydn’s Seven Last Words of Our Saviour on the Cross is ideal music for Holy Week. Originally scored for orchestra, the greater intimacy of Haydn’s own arrangement for string quartet arguably lends itself to a more intense experience. Its seven main sections, all in C major and all marked Adagio, are devotional reflections on Christ’s Last Words and were intended to be interspersed with a reading of – and a sermon on – each of the Words in turn.

This presents an issue for non-church-based performances: it would not do Haydn’s Seven Last Words any favours to perform one Adagio after another uninterrupted, but how best to break the work up? For this Wednesday of Holy Week concert in Wigmore Hall, the Chilingirian Quartet and Hilliard Ensemble came up with an intriguing solution: interspersing the Haydn with the early-seventeenth-century polyphony of Carlo Gesualdo.

Notorious for the colourful nature of both his music and private life (most infamously the lurid tale of the composer murdering his first wife and her lover), Gesualdo nevertheless seems to have drawn great inspiration from liturgical texts which meditate on the Passion. Though highly spiced, the emotional nature of his “Holy Week Responsories” is sincere, the music capable of providing a complementary contrast to Haydn’s rococo restraint. 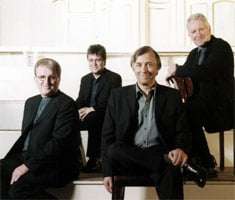 Did it work? Yes – up to a point. The disparity between the plush string sonorities and the stark, vibrato-less Hilliard voices initially took some getting used to – not helped by some very shaky tuning from the Chilingirian musicians. The Hilliard members, too, seemed less than secure, so it was not always possible to tell if we were hearing intentionally extrovert chromaticism or just wayward ensemble, and the six voices did not always blend – the two strident countertenors often sticking out unflatteringly.

Things did settle down a little but, throughout the first half at least, the Chilingirian accounts of the Haydn were by and large lumpy and unyielding, and the musicians’ tuning frequently insecure (the opening of the Fourth Word was especially heinous). And, while the Hilliard singers communicated real anguish in Gesualdo’s setting of “Deus meus, ut quid me dereliquist?” (My God, why hast thou forsaken me?) in the fifth Responsory, fluidity was rare. The sixth, and longest, featured a particularly taxing passage for countertenor duet which it would have been better not to have heard a repeat of.

The string-players’ tuning greatly improved after the interval and, even though Haydn needs a lighter touch in general, we were treated to some sensitively played and moving moments. Most successful was the Sixth Word, ‘Consummatum est’, which struck an ideal balance between solemnity and buoyant momentum. The beautiful duet-passages between the two violins were especially delightful. Despite a continued propensity for heaviness, the final Word was emotionally engaging and serene, with a delicately poised ending. The account of the short and fiery postlude depicting the earthquake that followed Jesus’s death, however, was too foursquare to evoke any real sense of drama.

The juxtaposition of Haydn and Gesualdo was an exciting and potentially rewarding idea, but it would probably have worked better with more consistent performances. Neither the Chilingirian Quartet nor the Hilliard Ensemble felt entirely comfortable with their respective music. But there were some wonderful moments from both groups who, overall, managed to capture an appropriately devotional atmosphere.