The Sound of Music
Music by Richard Rodgers to lyrics by Oscar Hammerstein II, based on a book by Howard Lindsay & Russel Crouse, suggested by The Trapp Family Singers by Maria Augusta Trapp 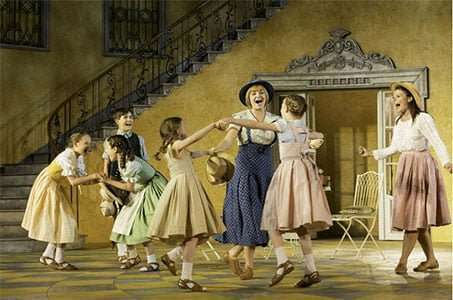 Raindrops on roses are far from being my favourite things, and when they keep falling on my head as well they can test my mood. That’s when uncharitable thoughts creep in – such as the question of whether London really needs another revival of The Sound of Music so soon after the last one (London Palladium, 2006).

It took all of two minutes for Rachel Kavanaugh’s pitch-perfect new production to win me over. As the clouds rolled away over the capital so did the doubts, thanks to the sheer childlike rapture that Charlotte Wakefield as Maria brought to the musical’s title song. With artless turns of phrase this star-in-the-making transformed Regent’s Park into a serviceable stand-in for the Austrian Tyrol, and the sodden trek from Baker Street tube station (ev’ry stream duly forded) receded into memory.

Rodgers & Hammerstein’s final collaboration is hamstrung by a book by Howard Lindsay and Russel Crouse that pays scant attention to character development. People are either transformed or left unchanged without explanation – none more so that Captain von Trapp himself, whose rigid values are required to evaporate in seconds. While America’s premier musical theatre partnership had previously delivered their shows complete, for this barely-disguised retread of The King and I they acted as hired hands, their free-standing numbers punctuating the action rather than driving it forward. Oscar Hammerstein’s waning health meant it was that or nothing; indeed, by the time the film version was made he was already dead, and Richard Rodgers supplied his own lyrics to the new songs required by Hollywood (‘I Have Confidence’ and ‘Something Good’ – two strong melodies that have subsequently been interpolated into the stage version). 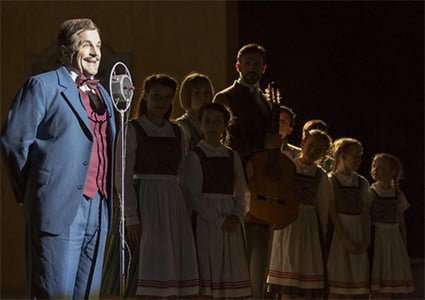 The Open Air Theatre is no Palladium but its limitations have not deterred Kavanaugh and her company from delivering a tight, vibrant show. The stage was awash with talent and graced by half-a-dozen exceptional children, astonishingly well drilled in Alistair David’s angular choreography and only fractionally annoying in their cheesy stage-school teeth-‘n’-smiles. The outstanding junior performer was Arthur Gledhill-Franks, whose gleeful presence and pure-toned musicianship as Kurt were enchanting.

Despite being sixteen going on twenty-three, Faye Brookes was excellent as Liesl, the eldest of the von Trapp progeny. If she seemed a little mature for her role, the opposite was true of Helen Hobson who, while always a classy singing actress, was perhaps too Maria-like in tone for the Mother Abbess. ‘Climb Ev’ry Mountain’, an anthem of admittedly nigh-impossible range, only came to life when Hobson hit her upper register.

A first-rate supporting cast spun gold from the straw of their under-defined roles, with Michael Matus’s darkly comic Max a stand-out. Kavanaugh helped her actors (and the audience) by subverting the text whenever she could, as when Michael Xavier’s finely-etched Captain von Trapp uses gritted teeth to tell Frau Schraeder (a slinky Caroline Keiff) “It’s fun being with you”.

Peter McKintosh’s unchanging set, simply conceived and beautifully achieved, is an elegant player in its own right, while Stephen Ridley’s dynamic band makes Chris Walker’s reduced orchestrations sound idiomatic and full-bodied. Indeed, it’s a fabulous production at every level: an over-familiar warhorse perhaps, but staged here with the energy and class of a thoroughbred. Strongly recommended, even to curmudgeons.