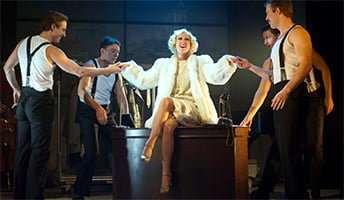 William ‘Billy’ Haines was a box-office star in the Hollywood of the 1920s and 1930s. Born in 1900, he ran away from home in Staunton, Virginia at age 14, accompanied by someone he called his “boyfriend”. They got factory jobs and also opened a dance hall/brothel. In 1917 Haines returned home when his father’s cigar business collapsed but was back in New York two years later where he had a number of jobs including that of male model, until he was discovered by a talent scout for Samuel Goldwyn Pictures. He won the New Faces of 1922 contest and gained a Goldwyn contract and was put to work on a number of extra and bit parts. His big break came in 1923 after which the studio began to fashion him into a promising leading light.

He was loaned to other studios, and his career blossomed. He appeared in Three Wise Fools (1923), the first film where he made a good impression; then he went to Fox for The Desert Outlaw, and to Columbia for The Midnight Express, then back to Goldwyn for Brown of Harvard. He appeared with Mary Pickford in Little Annie Rooney and with Marion Davies in Show People, King Vidor’s comedy about Hollywood, which came out in the same year (1928) as the first talkie, The Jazz Singer. After some thirty silent movies Haines progressed effortlessly into talking pictures and made another twenty or so films before his fall from grace. 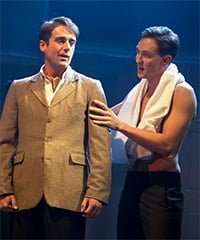 The title of Claudio Macor’s play comes from Haines’s 1931 comedy A Tailor Made Man about a trouser-presser who pretends to be somebody else by dressing in an evening suit so that he can gatecrash a society party and make good in the world; Haines saw himself as something better than he was, such was his ambition to succeed. In 1924 Goldwyn Pictures merged with Metro Pictures to form Metro-Goldwyn-Mayer under the direction of Louis B. Mayer. It is this part of Haines’ life that was dramatised by Claudio Macor which he has turned into a musical with the collaboration of Amy Rosenthal, Duncan Walsh Atkins and Adam Meggido. The story is told in flashback as a reporter comes to visit Jimmy Shields, Haines’s long-term partner, shortly after Haines’s death from lung cancer in 1973. Despite their tempestuous ‘open’ relationship Haines and Shields stayed together for some fifty years, Haines defying Hollywood’s standards and mores.

Haines was always hard to handle, sharp, brash and opinionated, much like the characters he played. This was a persona that the public warmed to, and in a relatively short film career, a dozen years, Haines was really successful. Although he was a draw for the film-going public, he was a difficult customer for the studio. He insisted on going his own way rather than play the Hollywood game and, ignoring all the rules about misbehaviour, he would get drunk, go cruising and pick up sailors, but always went home to Jimmy. When M-G-M demanded he get married to save face, he refused and was fired by Mayer. 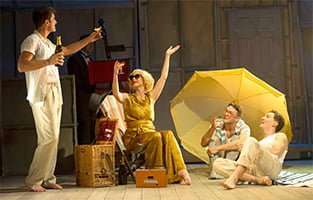 Thinking his popularity with the public would allow him work with other studios, Haines came a cropper because Mayer made sure he was blacklisted. The only work Haines could get was at very minor studios – by 1934 his career was all but over. He never acted again and even turned down a part in Billy Wilder’s 1950 film Sunset Boulevard, in which he would have played a guest in Norma Desmond’s card-playing circle. In fact Haines was rather glad not to be in films; most of his friends worked at the studios so he lived his movie life vicariously through them.

Haines and Shields had another ace up their sleeves: they opened an interior-design and antiques business, which proved successful with Joan Crawford, Carole Lombard, Marion Davies, Gloria Swanson, George Cukor and Ronald Reagan. William Haines Designs is still in business in Hollywood and New York and in Germany. Jimmy, lost without Billy, committed suicide soon after his death.

Haines’s wayward life makes for a strong story – he fought against the Hollywood system and the power that the studios wielded. I enjoyed the play when it first appeared in London and it mostly works well with the addition of music and songs. The Hollywood dream factory is highly suitable for the equally stylised medium of the stage musical. And M-G-M itself made starry movie musicals with Gene Kelly, Judy Garland, Mickey Rooney, Ann Miller, Howard Keel and Frank Sinatra. 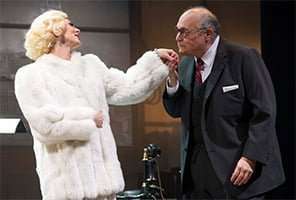 Some of the songs emphasise the shallowness of Hollywood life, as in ‘Another party’, ‘Gossip’ and ‘Design’, showing that it’s small wonder some of the actors went off the rails. They weren’t allowed to be themselves and had to conform to certain standards, a policy written into their contracts. Haines fell-foul of the system and was kicked out. By all accounts he was fairly insufferable, but he also had charm. Dylan Turner makes Billy not unlikable, presumably how he was in real life, despite misdemeanours and peccadilloes. He was great friends with the really big names such as Joan Crawford and particularly Marion Davies, the mistress of press tycoon William Randolph Hearst, here given a brazen hussy of a performance by the delectable Fay Tozer. Bradley Clarkson as Jimmy is a soft touch who would put up with whatever Billy did to hurt him and come back for more, but only because he truly loved his partner. It was Crawford who said that their relationship was the only truly happy marriage in Hollywood.

Mike McShane makes Louis B. Mayer, allegedly something of a monster himself, into an almost lovable, albeit two-faced, rogue who sees his M-G-M stars as one big (not so happy) family. He cannot abide Haines, but, having got rid of him, is happy enough to attend a party to celebrate the success of Billy’s design business. Michael Cotton as Victor Darro, always willing to toe the line as a screenplay hack, holds an unrequited passion for Billy. But that’s Haines – he just loved to be loved, although he stayed true to Jimmy, the only unwavering part of his strange life. There are good contributions by Kay Murphy as Pola Negri, the Polish femme fatale who had affairs with Chaplin and Valentino and who, as a movie vamp, came up against the Hollywood censors, and from Clive Ward as the downcast Jimmy.

The musician-duo tends to drown-out the lyrics, which seem better than the average for a new musical, but all in all this is a very serviceable production that believably recreates an arcane slice of Hollywood life neatly wrapped up in a package that’s half drama and half nostalgia, and realising the darker side of the American movie-making business.