[All sung in Italian with English surtitles]
LnRiLWNvbnRhaW5lcltkYXRhLXRvb2xzZXQtYmxvY2tzLWNvbnRhaW5lcj0iNmIzNDMzNmNmZTc3NWZiNGJlMTVjMmIwMzU3NWM1MjYiXSB7IHBhZGRpbmc6IDI1cHg7Ym94LXNoYWRvdzogNXB4IDVweCAxMHB4IDAgcmdiYSggMCwgMCwgMCwgMC41ICk7Ym9yZGVyOiAycHggZG90dGVkIHJnYmEoIDEwOSwgMTA4LCAxMDgsIDEgKTsgfSAudGItZmllbGRbZGF0YS10b29sc2V0LWJsb2Nrcy1maWVsZD0iODM3Y2ExZjc0MGRjZDdkOTdlMzQzOWMyYjIwMWZmZTMiXSB7IGJhY2tncm91bmQtY29sb3I6IHJnYmEoIDIzOCwgMjM4LCAyMzgsIDEgKTtwYWRkaW5nLXRvcDogMTBweDtwYWRkaW5nLWJvdHRvbTogMTBweDtwYWRkaW5nLWxlZnQ6IDEwcHg7IH0g


Anna Bolena performed on 13 November 2013; Maria Stuarda on the 14th; and Roberto Devereux on the 15th 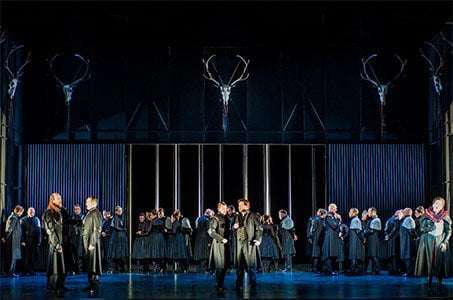 Donizetti’s operas loosely based around the lives of Anne Boleyn, Mary Stuart and the aging Elizabeth I are fantastic vehicles for dramatic sopranos. Each opera has an extended final scene for the divas to crown their performances with. There are also wonderful opportunities for similarly agile mezzo-sopranos, some taxing tenor parts, and a few baritone and bass plums as well. Donizetti, who wrote some seventy operas, had amazing fluidity but one could argue that much of his music is rather samey and lack dramatic depth. If Welsh National Opera was attempting to prove otherwise then presenting this trilogy is both enterprising and reasonably successful. Economics perhaps dictated that sharing some production resources would be appropriate and so each opera was staged in a black box and the chorus members donned similar and not always flattering costumes throughout. The principal singers were similarly attired but flashes of colour and greater generosity of material gave them prominence. Madeleine Boyd’s designs were gloomy, but the two directors made clever use of the space. Lighting was evocative and effective. 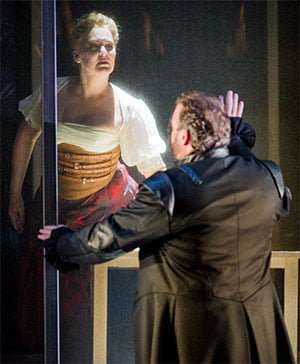 With the WNO Orchestra in glowing form, helped by the Birmingham Hippodrome’s warm acoustic, and the critically important solo woodwind players on fine fettle, one could sit back and relish just how dramatically adept some of Donizetti’s writing can be. Admittedly there are some rather ‘ordinary’ passages, but the three conductors managed to generate and maintain the propulsive qualities of the three operas.

There were also some real vocal treats. All three queens were dramatically convincing. As Anna Bolena, Linda Richardson took a little while to get into her dramatic swing, although vocally she managed the blend of Anna’s pathos, fieriness and pride to great effect. She came into her own in the second Act, from the duet with Katharine Goeldner’s equally intense Jane Seymour onwards. Anna’s ‘mad scene’ was also vividly enacted. Alastair Miles’s Enrico was an enormous asset, not least his ability to sing florid music with exceptional dexterity; yet Donizetti’s characterisation of Henry VIII is not sympathetic – this Henry is devious, manipulative and heartless – characteristics that do not match with Miles’s genial stage presence. In the trouser-role of Smeton, Faith Sherman revealed a gorgeous velvety mezzo, allied to a beautiful sense of line and unostentatious delivery. Robert McPherson was a stolid Percy, his vocalism clean and accurate, occasionally exquisite, though sometimes lacking dynamic variety. Stephen Wells, standing in for an indisposed Daniel Grice, made what could be made of the role of Rochfort.

In the second opera, Maria Stuarda, the exceptional singing was from Miles – his voice better suited to the gentle character of Talbot – and from Judith Howarth’s impressively grand Maria. Howarth rose to all the challenges, making the most of her final moments before Maria’s execution despite being saddled with a decidedly unlovely, unromantic and almost-comic costume. Her top register was thrilling. She is also a confident actress and the Act One encounter between Elizabetta and Maria and the vocal sparring was all that one wanted! Howarth was also adept at portraying Maria’s scheming side. She was well supported by Rebecca Afonwy-Jones’s sympathetic Anna. Alas, the Elisabetta of Adina Nitescu proved something of an auditory trial. This once creamy voice seems to have suffered significant wear and tear, and much of the singing, though accurate, was strident and rather unlovely. That she was made to play the character in a most unsympathetic way made the overall effect less interesting. Bruce Sledge was a sterling Roberto, making the most of his moments in the spotlight. Gary Griffiths registered as a politically devious Cecil. 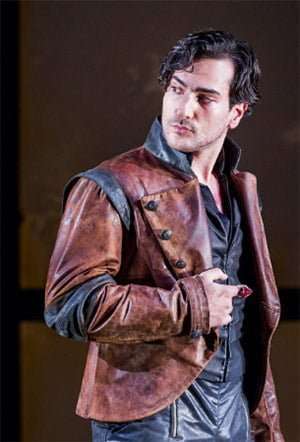 In the final opera of the triptych, Roberto Devereux, Elisabetta is found vacillating again regarding signing the execution warrant. Alexandra Deshorties’s portrayal was the more riveting as the evening progressed and her final scene was really something. The technical demands of the part were met with great assurance, and the increasingly erratic behaviour of the queen was tellingly depicted. This is Donizetti as his theatrical best. There was some other super singing – Leah-Marian Jones’s Sara was a thrilling counterpart and the big baritone role, the Duke of Nottingham, was sung with real panache by David Kempster. One could hear how Donizetti’s music must have inspired the young Verdi. In the title role, Leonardo Capalbo, who sang Roberto Devereux for Opera Holland Park some years ago, once again demonstrated his prowess in this role. His voice is strong and likeable, but there was less dynamic variety than ideal.

Production-wise it was the outer operas, both directed by Alessandro Talevi, which fared best. Maria Stuarda, directed by Rudolf Frey, was hampered by the ordinary and obvious depiction of Elisabetta as a harridan queen with few redeeming features; a shame as it is probably the strongest of the librettos and based on an exciting play. There were some good directorial ideas though, such as the two queens’ mirrored actions in the final Act; and Maria’s mental freedom, despite prison, compared with Elisabetta’s isolation for all the trappings of power, was cleverly staged using a light-coloured prison-room for Maria and the black austere court. Talevi’s Anna Bolena contained few surprises – it came over as a more dramatic work on its own terms. Roberto Devereux received the most extreme staging, particularly when Elizabetta turned into a spider-like monster wreaking havoc amongst her courtiers; nightmarish indeed, and visually breathtaking. The duet between Nottingham and his wife Sara was also strongly staged, the potential violence in the relationship brought to uncomfortably vivid prominence. By the end of the three evenings the cumulative power of the productions could not be doubted. If Roberto Devereux was the most memorable that was perhaps because of the power of the overall conception – and Deshorties’s deranged Elisabetta will remain extraordinarily vivid.