This remarkably interesting programme – which deserved a larger audience than that which was drawn to Cadogan Hall – surely showed this brilliant concert-band at its best. 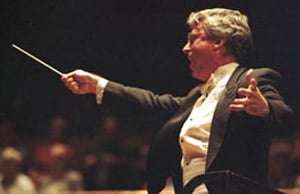 The large brass section opened the evening with Richard Strauss’s nobly impressive Feierlicher Einzug of 1909 in its original version. This elicited fine playing from these gifted musicians, although one felt the basic pulse could have been somewhat slower than Jerry Junkin adopted, especially in this sympathetic acoustic, which would have enabled the imposing majesty of the work to come through with greater effect.

Robert Carnochan, the Ensemble’s Associate Director, conducted Holst’s First Suite for Military Band (not that the programme advised his contribution!). This was also extremely well played, the tempos for the first two movements being absolutely spot-on, yet the tempo for the final ‘March’ could have been a shade quicker, thus bringing this radiant work to a more jubilant conclusion.

With Junkin returning, the Symphonic Dances from Leonard Bernstein’s “West Side Story” (pieced together by Sid Ramin and Irwin Kostal for orchestra and played here in an uncredited arrangement) found the Ensemble on home ground. Throughout, the inherent sense of style which makes this such an original work was superbly in evidence, my sole criticism being that the pulse for the ‘Cool Fugue’ tended momentarily to sag about two-thirds of the way through. Overall, this was a really fine account of a dazzling score.

The greatest interest surrounded John Corigliano’s Circus Maximus, his so-called Third Symphony of 2005, receiving (at least) its London premiere – no claim was made for this being a first either Europe or the UK. Like others of this composer’s works, Circus Maximus uses spatial effects in the periphery of the hall and through the auditorium to a significant degree – perhaps rather more than the material merits – and one has to say that the work is, notwithstanding the composer’s title, not a symphony at all.

In essence the piece is a suite in eight continuous movements, lasting about 35 minutes, with many aleatoric (and therefore non-symphonic) passages. But the title ‘Symphony’ doubtless looks impressive enough in the composer’s list of works. Given the colourful, almost extra-musical, nature of the piece’s original inspiration, it comes across as a kind of an early-21st-century equivalent of a suite by Massenet or Respighi, filtered through and heavily indebted to Charles Ives and Leonard Bernstein, the former in terms of occasional Yankee brash chaos, and the latter in terms of rhythmic impetus and, indeed, basic instrumentation. Nonetheless, Circus Maximus shows considerable imaginative skill and dramatic flair.

The composer – this year celebrating his 70th-birthday – would no doubt have been very pleased at the impressive and committed nature of this splendid Ensemble’s playing and the clear and inspiring nature of Jerry Junkin’s conducting.