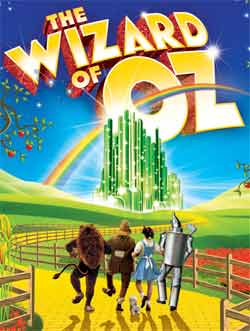 Lyman Frank Baum, creator of “The Wizard of Oz”, was born in 1856 in Chittenango, New York State, where he tried to become an actor but without much success. Instead he spent his early life travelling around doing odd jobs. Always a prolific reader and inventor of stories about imaginary friends, he read to his sons so often that his mother-in-law suggested he should write his stories down. In 1900, his first book, “The Wonderful Wizard of Oz”, was an immediate success, selling a quarter-of-a-million copies. To publicise the book, a show based on the book was staged, “The Wizard of Oz” appearing at the Majestic Theatre in New York City in 1903, with music by Paul Tietjens and A. Baldwin Sloane, and book and lyrics by Baum himself. It ran for nearly three-hundred performances and then toured for a further nine years, bringing in a fortune for its author which Baum quickly managed to dispose of, becoming bankrupt.

There were thirteen sequels to the book, which brought Baum a worldwide audience and the books have remained in print. The author acknowledged that his influences were the Brothers Grimm and their tales, and the stories of Hans Christian Andersen, as well as Lewis Carroll’s ‘Alice’ adventures. What makes his stories different from other children’s literature are the possible social messages lying beneath the narrative.

For instance, the Yellow Brick Road represents the gold standard, the silver slippers (they became ruby slippers in the 1939 film) represent the sixteen-to-one silver ratio, and the Wicked Witches are the banks and railroad authorities that drove the farmers out of business and who are represented by the Scarecrow, while the Tin Man is a mouthpiece for the poor slaves of industry working for next-to-nothing. It could be that the Cowardly Lion stands for the Wall Street investors who lost their nerve, while the Munchkins are common folk put-upon by the Wizard President, a charlatan politician holed-up in Washington and known as Emerald City of Oz. Or it could be none of this and just a story for children with enough imagination to help them think for themselves. And surely everyone knows that the story’s moral is that you do not need to go looking for happiness, for it is there in your own backyard. 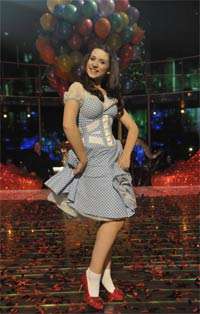 Other stage versions have been mounted, including in the UK, often at Christmas instead of a pantomime. The most famous version of Baum’s story is, however, the 1939 film with Judy Garland as Dorothy and with the music of Harold Arlen and the lyrics of E. Y. Harburg. Not an out-and-out success initially, the film has gained popularity every time it has been re-released or shown on television, and, of course, now it is available on DVD. The book has also been adapted for radio and television, and for many other cinema versions including silent movies, animated films, an Australian rock-music version, a black version with Diana Ross, Lena Horne, Michael Jackson and Richard Pryor, and another with the Muppets. No fewer than seven versions in various guises are slated for the future. There is even a prequel (“Wicked”) which tells how the witches came to Oz, currently running at London’s Apollo Theatre.

Andrew Lloyd Webber’s production is the result of BBC Television’s “Over the Rainbow” series and its search for a new Dorothy. The resulting show uses the songs from the MGM film plus new numbers written by Lloyd Webber and Tim Rice. The 1939 film was really a story with music, so the stage version has been boosted by the new material. However, whether any of the additional songs will be as timelessly memorable as the Arlen-Harburg numbers remains unknown: the Orchestra is quite overpowering but it is heartening to hear it playing Stothart’s original incidental music for the Garland film. Also, Lloyd Webber has interpolated some Mussorgsky and Elgar.

Leading lady Danielle Hope is no Judy Garland, and no-one would expect her to be. She does, however, acquit herself well as Dorothy, acting in a credibly innocent way, albeit without the essential fragility that Garland evoked. (Nobody ever sings ‘Over the rainbow’ quite like Garland, though.) With Michael Crawford as the Wizard and in several other small parts, the actor is still perhaps underused so that his is hardly a starring-role, but he is a well-seasoned man of the musical-theatre and a definite draw. As the three friends of Dorothy (only the Cowardly Lion admits to being in the closet) Edward Baker-Duly as Tin Man, Paul Keating as Scarecrow and David Ganly as the aforesaid Lion are truly marvellous.

The Wicked Witch of the West is perhaps the most stunning performance, and Hannah Waddingham certainly makes her the loudest. Looking very much like Margaret Hamilton in the film of “The Wizard of Oz”, she cycles on and off, swoops in and out, and flies over the audience, generally making a thoroughly evil nuisance of herself, only to melt away at the end. Great stuff and Waddingham gives her new song ‘Red shoes blues’ everything she has and is a triumph. The ensemble works hard, too, as various farmhands, Munchkins, crows, citizens of Oz, and winged monkeys in such numbers as ‘Ding dong, the Witch is dead’, ‘Follow the Yellow Brick Road’, and ‘We’re out of the woods’, while director Jeremy Sams and choreographer Arlene Phillips keep them all moving at a heady pace in their well-drilled routines. Of course, the one character who really steals the show is Toto, Dorothy’s little canine friend (one of four in the production) who goes everywhere with her, never putting a paw out of place. The pooch is just terrific.

At times the cast is also dwarfed by the designs, which threaten to swamp the production. The special effects might be frightening for very young children, particularly in the scenes involving the Wicked Witch. However, Robert Jones’s sets and Jon Driscoll’s projections are impressively scary, especially during the tornado scene, in monochrome like the film, heralding the colourful journey along the Yellow Brick Road to Oz. It is essentially a family show, but with top-price seats at £62.50 it is not a cheap night out.