The World Goes ’Round
The songs of Kander & Ebb, music by John Kander, lyrics by Fred Ebb, a show conceived by Scott Ellis, Susan Stroman and David Thompson, with numbers from musicals and films including The Happy Time, The Rink, The Act, Woman of the Year, Chicago, Funny Lady, Kiss of the Spider Woman, Flora the Red Menace, Cabaret, New York, New York, and 70 Girls, 70 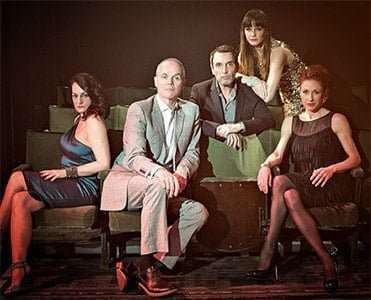 Ain’t it the truth – you have no compilation show for ages and then two come along at once. First it was Putting It Together, a collection of songs by Stephen Sondheim, and now it’s Kander & Ebb in The World Goes ’Round. Mercifully their songs also work well outside of the respective shows. Whereas Putting It Together has a tenuous plot, the Kander & Ebb compilation is around two bakers’ dozens of top songs linked together by five singers and a dance ensemble for an entertaining couple of hours. It also provides a workshop in how to write numbers with point, poise and perception. It’s a marvellous confection.

Opening off-Broadway in 1991 where it ran for a year, The World Goes ’Round garnered several US theatre awards and a recording was issued. It then went on tour for ten months with the content revised. This is the version playing at the Union. The title song is from New York, New York – directed by Martin Scorsese and starring Liza Minnelli and Robert De Niro – and opens the show sung by the full company, a smart piece of philosophy. More perspicacity ahead in ‘Yes’ and ‘Coffee in a cardboard cup’, two numbers from 70 Girls, 70, the 1971 show that ran a mere month on Broadway but which had a good run ten years later at Chichester and in London. ‘Yes’ is a plea to be positive, which the company headed by Emma Frances perform with relish. Oddly enough ‘Coffee’ arrived in the same year that Starbucks was founded and here we are, four decades later, still complaining about the revolution in beverage drinking and the way that life is lived in the fast lane – to go!

Liza Minnelli figured large in the careers of Kander & Ebb. She was in their first show, Flora, the Red Menace. ‘Maybe this time’ was written for Minnelli and interpolated into the film version of Cabaret as a kind of anthem for Sally Bowles’s life. Also included are numbers for Liza such as ‘Sara Lee’ and ‘Arthur in the afternoon’. The first, a paean of praise to the American cake-mix heroine, is sung by Simon Green as he extols the virtues of all the baking products upon which the US kitchen was built. In ‘Arthur in the afternoon’ Lisa Stokke admits that when she’s feeling low after lunch, she just phones for her favourite renta-stud, Arthur, played and danced by Elliot Berry, a spirited hoofer making a winning professional debut in London with this sexy number. Also for Liza is ‘Ring them bells’, about Shirley whose parents think she should see more of life. Having taken a world trip she meets a man who lives in the next apartment to her in New York. Rather than Minnelli, Emma Francis’s performance recalls Bette Midler in this very funny travel story with a moral.

Although Cabaret was a success with nearly 2,000 performances on Broadway, Chicago eventually became Kander & Ebb’s biggest hit with 6,700 outings for what was basically a concert performance with choreography. This was for the 1996 revival, whereas in 1975 it had played under a thousand evenings. In London the 1997 revival ran for fifteen years. We get three great numbers, ‘All that jazz’, ‘Mr Cellophane’ and ‘Class’. The first is a tribute to the show’s original choreographer, Bob Fosse. In the second Gareth Snook plays a sad man who is so invisible you would hardly know he was there. And in ‘Class’ Emma Francis and Susan Fay bemoan the fact that nowadays they get no respect from anyone, and all display Kander & Ebb at their best – intense, offbeat music to smart, edgy lyrics.

Other songs worth a mention include ‘My colouring book’, originally written for Kaye Ballard’s nightclub act and recorded by Andy Williams, Dusty Springfield, Aretha Franklin and others if perhaps most notably by Barbra Streisand. Kander & Ebb also wrote songs specifically for Streisand including numbers for Funny Lady, a sequel to Funny Girl, which are included in The World Goes ’Round. For two hours this tonic of a show creates the special world that was Kander & Ebb’s particular territory in a most pleasing manner. The excellent cast is aided by Sam Spencer Lane’s riveting choreography and Kirk Jameson’s well-paced direction. Michael Riley’s piano accompaniment keeps the company moving along with professional polish.