Amoy y Guerra (Love and War)
Excerpts from zarzuelas by Jacinto Guerrero in a libretto devised and directed by Scheherazade Pesante
Presented by ZOOS, the Zarzuela Obligato Opera Society 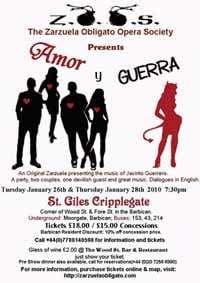 The origins of the zarzuela, the Spanish lyric-dramatic genre that alternates between spoken and sung scenes and incorporates opera, popular music and dance, go back to 1633 and the Spanish poet King Philip IV. He converted his hunting lodge near Madrid into a small palace where zarza bushes were growing. Thus his palace became known as the Palace of the Zarzuela where King Philip gave musical recitals, employing composers and musicians from Madrid. And so the genre of the zarzuela had its beginnings, although it developed somewhat slowly over the following two hundred years.

There are two main forms of zarzuela, the earliest being the baroque period (c.1630-1750), and then the romantic zarzuela (c.1850-1950), which can also be divided into género grande, the full-length works which could last for up to four hours, and género chico, single-act pieces that were much shorter. The new genre soon spread to the many regions of Spain and to the Spanish colonies and other Hispanic countries such as Cuba and the Philippines. In 18th-century Bourbon Spain zarzuelas were much influenced by Italian opera, although eventually the older style became unfashionable. During the 19th-century the form was revived by many Spanish writers and composers under the aegis of Francisco Barbieri and Joaquin Gaztambide, making it more Spanish with less and less influence from the French and Italian styles. The basic structure, however, stayed the same, with sung solos and choruses, spoken scenes and comedy songs, ensembles and dances. As time went on, the zarzuelas improved in quality so that by the 20th-century they acquired a more formal structure, emulating that of traditional Italian opera. Those responsible for expanding the repertoire include Pablo Sorozábal, Federico Moreno Torroba and Jacinto Guerrero. Although the zarzuela tradition has died out since the 1950s, a new type of work has replaced it in the form of the género infimo or revistas, musical works similar to the zarzuela but lighter and bolder, not to say risqué and rude.

The newly formed Zarzuela Obligato Opera Society last year presented a tribute to Joaquin Rodrigo but has now staged for its inaugural production a sort of hybrid zarzuela using the music of Guerrero and shaping the songs around a new libretto. Scheherazade Pesante, director of the Society, is passionate about this Spanish form of entertainment and is determined to revive interest in this musical-theatre tradition. Much of this genre is completely unknown to most of the musical world outside of Spain. However, ZOOS has been encouraged in its aims by the Society’s patron, Cecilia Rodrigo, daughter of the late composer.

Scheherazade Pesante calls her piece “Amor y Guerra” (Love and War). The story is about Juan and José who, although unrelated, are like blood-brothers, while Meri and Murcia are as close as sisters. Jose and Murcia were childhood friends and then lovers. They are now engaged but find they have little in common. Meri and Juan are together but they too are constantly fighting. When Murcia throws a New Year’s party she invites Juan and Meri and some other friends. However, she hasn’t reckoned on the appearance of Catalina, a gatecrasher, who upsets the romantic apple cart.

The narrative unfolds in a sort of French farce or television sitcom way and is written in the style of the revistas, the most modern expression of the zarzuela tradition. The musical excerpts from many of the zarzuelas written by Jacinto Guerrero fit well, a wide range of moods that both demonstrate the composer’s varied abilities and give a taste of what the zarzuela genre is all about.

The cast of singers, working against a poor acoustic in St Giles’s church, make the most of the music and really come up shining. There was outstanding work from Loic Guguen as José and Glen Tweedie as Juan. Guguen was in fine voice for ‘Cancion de sembrador’, the song of a farmer who’s happy when he’s sowing the wheat that will one day become bread, and is passionate in the extreme when roused to the point of killing for love as he tells of the power of his Spanish knife in ‘Cuchilla Español’. Tweedie is just as passionate when describing ‘Mujer de los negros ojos’, the woman with the dark eyes. There was good work too from Anja Rossau as Murcia and Nicola Pulford as Meri, whose love-lives get turned over by the meddlesome Catalina, a part sung with great verve and glee by Clare Presland.

The company is augmented by a number of party guests played by singers and actors who sometimes get together for some ensemble singing such as the song of the ‘Cabaret girl’ and who provide a background of dance or more specifically body movement with a Spanish feeling which certainly creates the impression of a party going on. Musical director Stephen Hose on piano copes well with all the various song styles and in his accompaniment reveals the essential ‘Spanishness’ of the music. This is a nice taster of some rarely performed music that deserves to be given the fullest revival it deserves. The Zarzuela Obligato Opera Society should be encouraged to continue working on this fascinating musical genre.