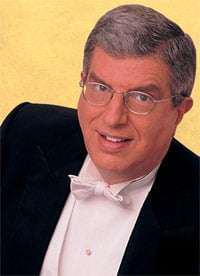 Following his enormous hit with “A Chorus Line”, which ran for over 6,000 performances on Broadway, Marvin Hamlisch’s next show, although successful in its day, was no masterpiece. It did a respectable 1,000 or more performances in New York and ran for some 17 months in London. Compared to the big, dizzy, champagne heights of “A Chorus Line”, though, it was very small beer, a chamber piece with just two leading characters and a (small) chorus line of six alter egos.

“They’re Playing Our Song” is based on the real-life collaborative experiences of composer Marvin Hamlisch and lyricist Carole Bayer Sager. Apart from his success with “A Chorus Line” (a Tony Award and Pulitzer Prize winner), Hamlisch also wrote ‘The way we were’ (a Grammy and an Oscar winner) and worked with the star of “Barbra Streisand: The Concert” (Emmy Award winner). Sager wrote with many other composers and singers including Burt Bacharach, Neil Sedaka, Peter Allen, Neil Diamond, Bette Midler and Bob Dylan.

Among the songs that Hamlisch and Sager wrote together was ‘Nobody does it better’ for the James Bond film “The Spy Who Loved Me”, a hit for Carly Simon and others. They dated for two years and lived together for another year; but, contrary to popular opinion, they never married. Their period together was productive and gave birth to this autobiographical Broadway show.

Taking playwright Neil Simon on board ensured that the piece would be funny and full of great one-liners. Both Hamlisch and Sager as Vernon and Sonia are portrayed as neurotic individuals, so Simon was an obvious choice to write their story, as his plays are full of them. Quite how much of the characterisation reflects real life or is just the invention of Simon is difficult to gauge. 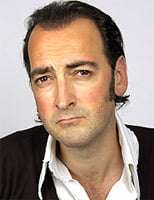 Neither Vernon Gersch nor Sonia Walsk appears to be particularly nice people although, where Vernon is relaxed and together, Sonia is constantly falling apart and is as irritating as hell. On this showing she would have you running down Eighth Avenue screaming and foaming at the mouth. Vernon, already toting an Oscar, is looking for a new collaborator and has written music to some lyrics that Sonia has sent him. She agrees to work with him even though she reckons her words are no match for his music. Sonia frustrates Vernon, who is used to his daily routine, because she cannot get anywhere on time.

On her first morning working with Vernon she arrives twenty minutes late – plus a whole day! Her problem is she cannot split from her previous boyfriend, Leon. Eventually Vernon and Sonia become romantically involved but an evening at a restaurant is a disaster when Sonia arrives late again because of Leon. In an effort to get away from the obstacle between them, Vernon suggests a weekend on Long Island, but again it’s interrupted by calls from Leon. A period in which the work they do is good finds their relationship under stress. It gradually deteriorates and they decide to split. However, they still need to be together in order to write the songs, so another decision has to be made.

What we have here is the stuff of sit-com and you could quite easily imagine the scenes forming a TV series in the style of “Friends”. You know the episode rundown: there’s the one where they go to Le Club and cause a scene, the one where the car breaks down on the way to Long Island, the one where Sonia checks into the wrong cabin, and the one where she arrives late for the recording session… 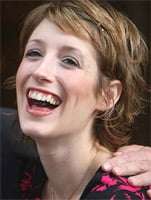 It’s all very episodic and shows none of the three collaborators at their best. It’s not top-drawer Neil Simon and neither is it Hamlisch and Sager at their finest. Apart from the title number, the tunes in “They’re Playing our Song” are not particularly memorable. They resemble the sort of music you might hear in a lift or a hotel lobby without taking any notice. They are perhaps just pop ballads typical of their time, the late 1970s, inoffensive but without the impact of the numbers in “A Chorus Line”.

There’s a certain amount of fun to be had from Matthew Wright’s 1970s’ period set and costume designs – cheesy brown wallpaper, naff furniture and hideous clothes – all presented on a huge stage revolve, an old vinyl disc complete with its own Epic label. And then there are the wigs with Sonia and her alter egos toting bright-ginger crowning glories in various styles and Vernon and his chorus sporting shaggy black hair-dos. There’s a running joke in which Sonia always appears in a new dress acquired from a show in which either she or a friend has appeared. Thus we witness monstrous costumes from “The Cherry Orchard”, “Of Human Bondage” and “Pippin” but, as she says, never anything from “Hello, Dolly!” A reference to the “Gulag Archipelago” has a certain unintentional topicality.

Performances are problematic. As Vernon, Alistair McGowan, known for his work impersonating the famous, plays the Neil Simon lines as if he were Walter Matthau and yet many of them are just thrown away. Connie Fisher, recalled for her rise to fame on television by winning the role as Maria in “The Sound of Music”, has an accent like Tyne Daly in “Cagney and Lacey” but really not sounding convincing as Sonia. The timing if the lines seem too glib. Characterisation is at surface level only and director Fiona Laird fails to get to the real heart of these two misfits arbitrarily flung together. There’s no real chemistry going on here and that’s a pity. With only two characters they need to fuse to make the show work – but it’s just not happening.