Adès
Powder Her Face, Op.14 – Chamber Opera in two acts to a libretto by Philip Hensher 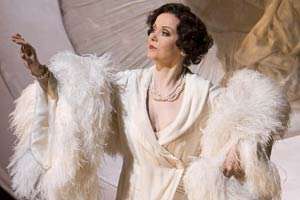 When Thomas Adès’s “Powder Her Face” appeared at the Everyman Theatre in Cheltenham in 1995 it caused quite a stir. The story centres on the reckless life of Margaret, Duchess of Argyll (1912-93) and her infamous antics with the men of her life. One occasion included an encounter with Douglas Fairbanks Jr (known at the time as the “headless man”), with whom she was caught in flagrante delicto on a photograph that was produced at her divorce trial in 1963. He was “headless” because the camera was focussed elsewhere – the Duchess! 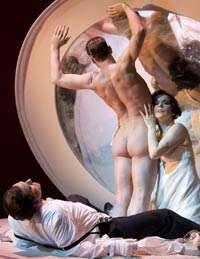 This imaginative production does not shy away from the salacious aspects of the Duchess’s life, and whilst some may think this is to the detriment of understanding the Duchess’s character and flaws, one has to remember that she knew what she was doing and that she enjoyed her nymphomania. The Duchess is portrayed as a bored woman who pleases men to relieve her tedium. One graphic example had the Duchess powdering her face (she does that a lot!) as a waiter brings her beef-sandwiches and wine. She has other things on her mind and proceeds to satisfy the man with her mouth, when, in a coup de théâtre, she leans back and a handsome naked man rises from between the waiter’s legs. The Duchess worships his body as he rotates 360 degrees before disappearing back between the waiter’s legs.

The production is shocking and there is no escaping the depravity – for which Carlos Wagner must be congratulated. The set itself is a large sweeping staircase, on which the characters walk up and down, some more confidently than others. The Duchess, especially, has occasional difficulties, reflecting the precarious path she is walking. The Duke, for all his faults (he was hardly the model monogamist) manages to bestride the stairs with utmost confidence. A sequence of four numbers high above reminds us of the year. 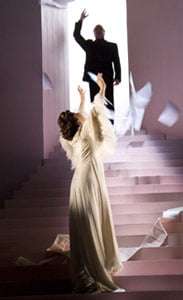 As the Duchess, Joan Rodgers gives an electrifying portrayal. She is clearly having a ball with the role, yet the veneer of respectability that the Duchess tries to keep is there as well. Only in the final two scenes, set after her divorce, does the desperation not come through as it might. Perhaps this is because the previous scenes do not take much too seriously, and perhaps we should not feel sorry for the Duchess, but Rodgers does succeed in giving her a degree of integrity during the Judge’s one-sided invective at the trial. Navigating Adès’s uneven and risky scoring was a brilliant achievement by Rodgers.

The opera is a caricature of its protagonists. The other parts have no pretence and it is all matter-of-factly done. Adès indulges much coloratura writing; Rebecca Bottone as the Maid deftly handles its inherent difficulties. She, as well as the other members of the cast, delineated their various roles such that they became individuals. Iain Paton, as the electrician, allowed events to happen and was not as boorish as his character of Lounge Lizard would suggest. Nonetheless, with powerful diction (this was a triumph across the cast) and a subtle bearing, he revelled in his undertaken parts.

As the Duke, Alan Ewing was very impressive. His presence dominated proceedings, even when the Duchess was distracting. His absence from the Duchess’s life was presented well through him being silhouetted in the doorframe at the top of the staircase, though his adultery with the maid was graphically demonstrated. As the Judge, Ewing was vicious and then his later incarnation as the hotel manager evicting the Duchess was a replay of the judgement in the trial, successfully hammering home society’s damnation of her.

Adès’s writing is virtuosic and has a tendency to use instruments at the extremes of their registers. This is a rapid score; Timothy Redmond, who conducted the Russian premiere at the Mariinsky Theatre in October 2007, knows the intricacies of the music and he and Southbank Sinfonia present it vividly.

Leave your ability to be shocked at the door: this is something not to be missed.