Thrill Me: The Leopold and Loeb Story
Musical with score, book & lyrics by Stephen Dolginoff 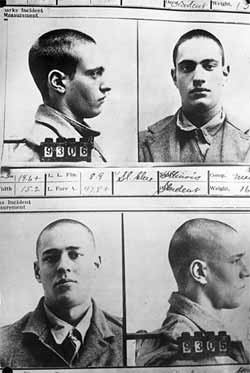 In 1924 in Chicago Nathan Leopold and Richard Loeb were the perpetrators of a hideous crime. It caused a scandal. Two teenage law students committed the motiveless and random murder of a young boy for no particular reason other than they thought they could get away with it. Loeb had been reading the philosophical writings of Friedrich Nietzsche, particularly his expounding of theories about the Übermensch or superman, a being or race superior in every way to his fellow man. Loeb (and ultimately by association Leopold too) believed he was born to be a superman. They both came from wealthy families and were highly intelligent. Leopold had been a child prodigy, talking from the age of four months, had an IQ of 210 and could speak twenty-seven languages. Loeb was the son of a lawyer who became the vice-president of Sears & Roebuck. They both lived well, were studying to be lawyers but their ideas were so perverted that it led to criminal activity. They had met at the University of Chicago and began their life of crime with petty thefts which escalated to more serious crimes and their ultimate act of murder. 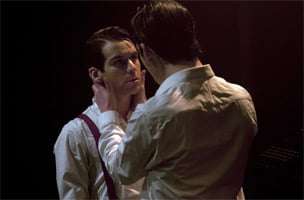 They planned the murder over several months and decided to kidnap Bobby Franks, the 14-year-old son of a Chicago millionaire. They killed him with a chisel and took the dead boy to a remote lakeside area where they threw acid on the body to hide his identity, went off for a hot dog and returned to dump the body by railway lines. Returning to Chicago, they called the boy’s family and asked for a ransom – not that they needed the money. Their crime was an experiment in testing their superior intelligence, but they were none too careful and were finally caught. They confessed and sent for trial. Their lawyer, the famous Clarence Darrow, an anti capital-punishment advocate, told them to plead guilty to save them appearing before a jury, being found guilty and receiving the death penalty. By confessing, Leopold and Loeb received life for murder plus ninety-nine years for kidnapping. Darrow’s plea was that the two boys were “broken machines”, having inherited their evil ways from their studies of Nietzsche.

The case inspired Patrick Hamilton’s 1929 play “Rope”, about a random killing by two possibly gay boys. Alfred Hitchcock filmed the play in 1948 using his ten-minute take method that dispensed with the usual editing technique. Jean Renoir famously said of the film that “it was about two queers who never even kiss each other.” Other dramatisations of the same story but using different names included Meyer Levin’s 1956 novel “Compulsion”, which was filmed three years later with Orson Welles playing Clarence Darrow.

In Stephen Dolginoff’s musical version, it is made clear that at some point Leopold and Loeb were lovers, Loeb the dominant personality with Leopold so attached to his friend that he went along with whatever he wanted, although was not above secreting evidence that when discovered would incriminate both of them. The musical is set in 1954 in Joliet Prison (Illinois) as Leopold recalls what happened thirty years earlier and then we see a re-enactment of how Nathan and Richard planned the murder. Leopold seems reluctant but the strength of Loeb’s character convinces him, if only for the thrill of sexual favours. 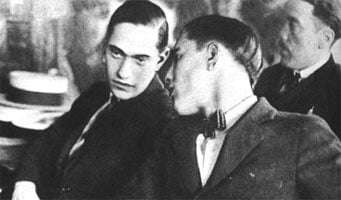 With music, book and lyrics all by Dolginoff, the piece stands or falls at the door of one man. For the most part he seems he has succeeded in his aim to make the story “sing”, with dialogue merging into lyric and lyric taking the plot further. Nathan sings that ‘Everybody wants Richard’, a popular boy, tall, strong, handsome, assertive, whereas he is the insignificant one following behind. Other songs include ‘Nothing like a fire’ (the boys seem to have enjoyed arson too), ‘Roadster’ explains how the kidnapping was achieved, ‘Superior’ takes a nod towards Nietzsche, and, when Nathan’s spectacles are found at the scene of the crime, ‘My glasses’ and ‘Just lay low’ find the boys in a panic making their excuses. ‘Life plus 99 years’ is not only a song about the prison sentence, it is also the title of the autobiography of Nathan Leopold which he wrote after being paroled in 1958.

The piece lasts under ninety minutes with a cast of two plus piano accompaniment and some off-stage voices of the parole board and a radio announcer. It certainly packs a punch and by the end you feel you have been in the company of some extraordinary, albeit evil, beings. Both actors impress – Jye Frasca as the beaten-down, put-upon Leopold who has to cling to Loeb for immoral support, while George Maguire as Loeb is all brash bravado, the big man who is always right, spoilt and always has to get his way. Without him Nathan would not have become involved in villainy – his is a crime of association, of being under the influence of a really nasty piece of work. If Leopold did his time and returned to society to live for another dozen years as a free man until his death in 1971, Loeb got his comeuppance by being murdered in prison after twelve years behind bars. As he was the true instigator of the crime, perhaps this was rough justice – and each man got what he deserved.